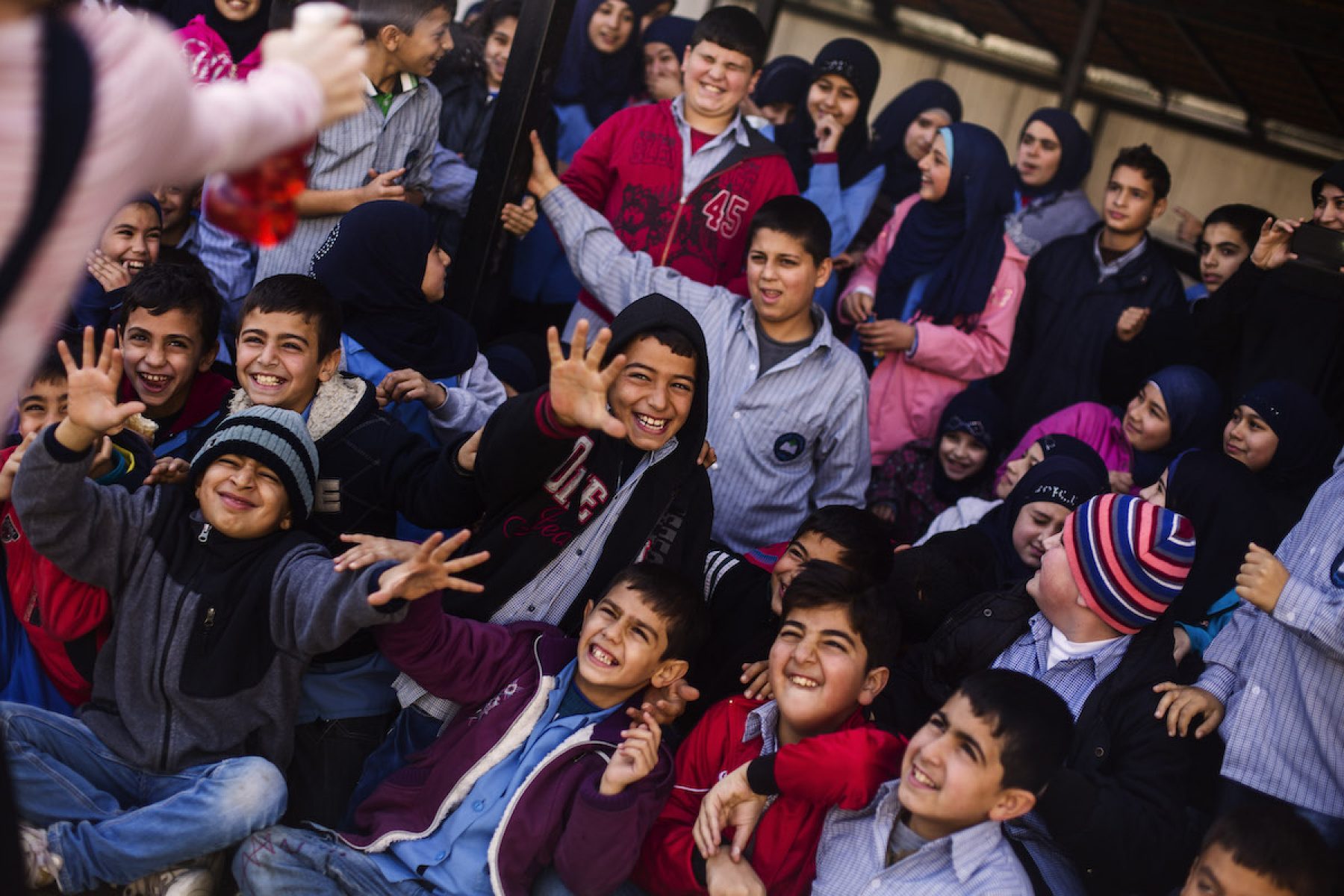 Clowning around: how one charity kept children smiling through the pandemic

A year on from winning the Kindness Awards, Clowns Without Borders UK explains how it used the prize money to continue its work from afar

Words by
Sarah LaBrecque March 23, 2021
Arts Education Peace Society Wellbeing
Brands of inspiration
This article has been created by Positive News and supported by Simple

A year on from winning the Kindness Awards, Clowns Without Borders UK explains how it used the prize money to continue its work from afar

How does a charity, which supports children in conflict areas internationally, carry out its work when its whole team is locked down at home? This was the challenge that faced Clowns Without Borders UK when the Covid-19 pandemic hit. The charity had just received an injection of funds after winning the Kindness Awards so the team had to be creative in order to make the most of the opportunity and further its positive impact.

The Kindness Awards were launched last February by skincare brand Simple, in partnership with Positive News. Six causes were nominated, and readers had the chance to vote for the one they felt most deserving of the prize: a £7,000 donation from Simple.

From uniting primary school children and the elderly through art, to tackling single-use plastics, the nominees showed what kindness looks like in practice. But there could only be one winner. In April, the votes were counted and Clowns Without Borders UK claimed their prize. 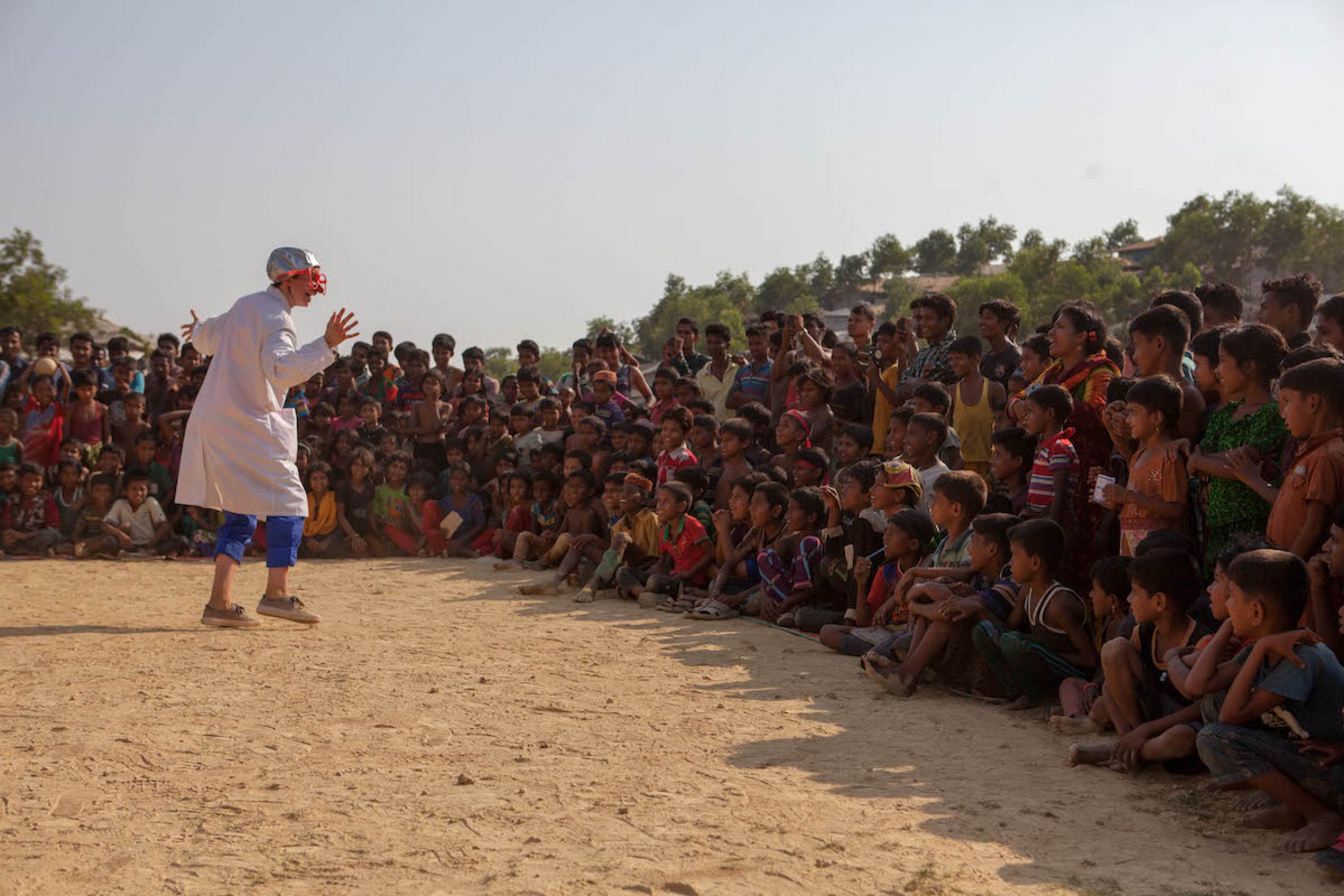 The charity works in refugee camps, conflict zones and disaster areas around the world, spreading much-needed respite for children living in these places, through laughter and play.

Nearly a year later, director Samantha Holdsworth fills us in on how they used the prize money.

“We’ve had a presence in Greece since 2016, both on the mainland and Lesbos,” she says. The Moria refugee camp, a sprawling expanse originally planned to shelter 3,000 people but hugely overcrowded with as many as 13,000, was where they often visited.

“We had everything booked to go in March. And with the prize money we thought we’d do two more visits throughout the year,” Holdsworth explains. As the pandemic unfolded, however, they soon realised overseas travel was off the cards. And the camp would eventually close to all but essential visitors. 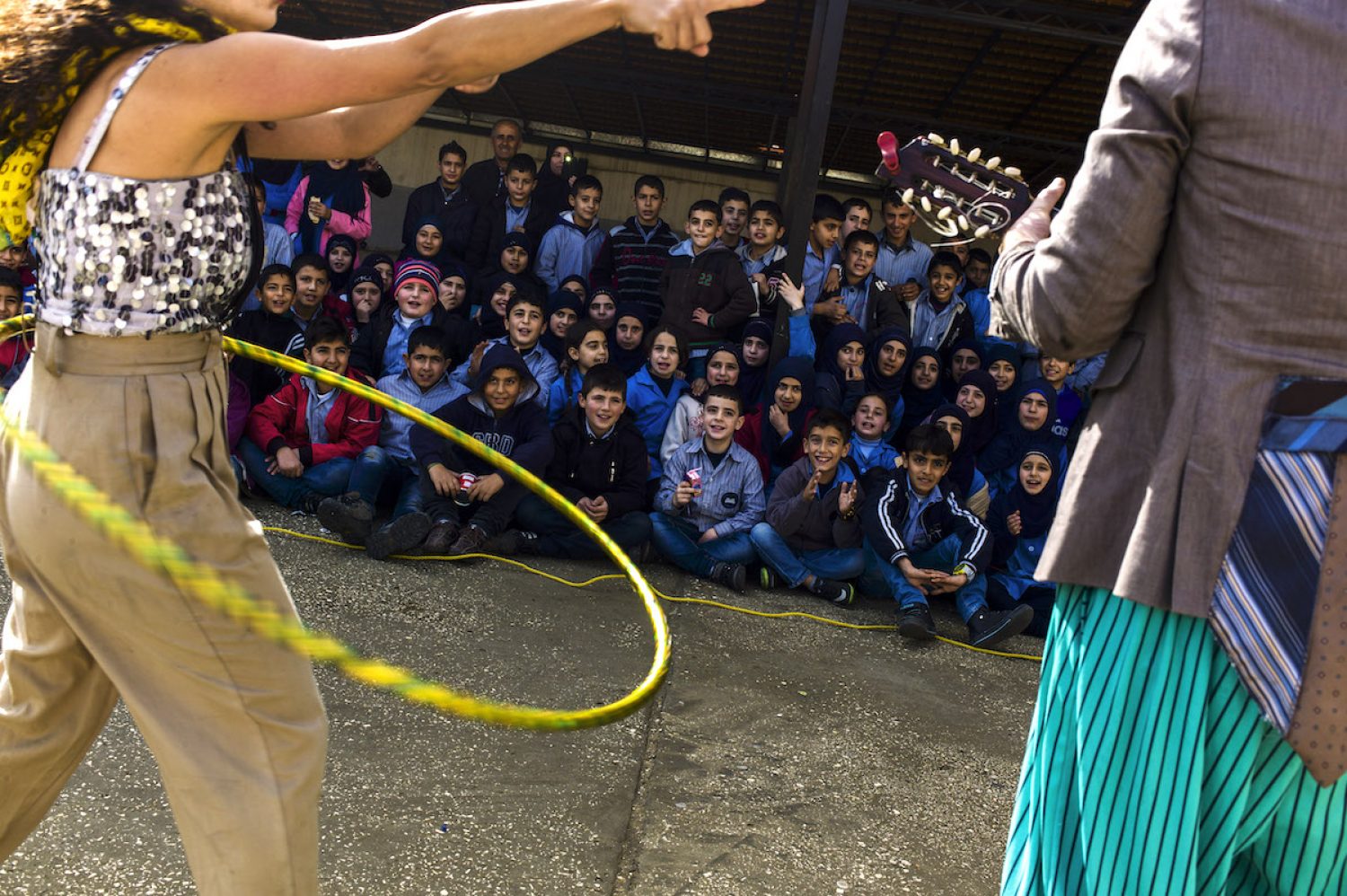 During the pandemic, refugee camps have been closed to all but essential visitors. Image: Diego Ibarra Sanchez

Determined to help in any way they could, Holdsworth came up with an idea she called Clown in Your Pocket. In collaboration with charity Waves of Hope, and with the help of a dedicated volunteer, they developed a fun, language learning programme for children. “We used short gifs and pictures to develop a play-based training program via WhatsApp.” she says. “And it was going really well.”

But then tragedy struck. In early September, a deadly fire ravaged the camp and their project had to be put on pause. Faced with this new setback, Holdsworth put her thinking cap on again.

Clowns Without Borders had begun visiting Mozambique in 2019 and so Holdsworth reached out to their partners there to ask how her charity could help. She learned there was a need for menstrual health education among young women. Largely a taboo topic, Covid-19 was making it even more difficult for girls to access information, as people weren’t going to clinics or community centres as much.

So they began working on a menstrual health education programme, going door-to-door to meet girls either at their doorsteps, or finding them outside where they gathered. Not being able to be there in person, Clowns Without Borders developed and facilitated remote training sessions for local women, who would deliver the sessions. The aim was to empower the trainers to use laughter, storytelling and games to engage the young women on this sensitive subject. 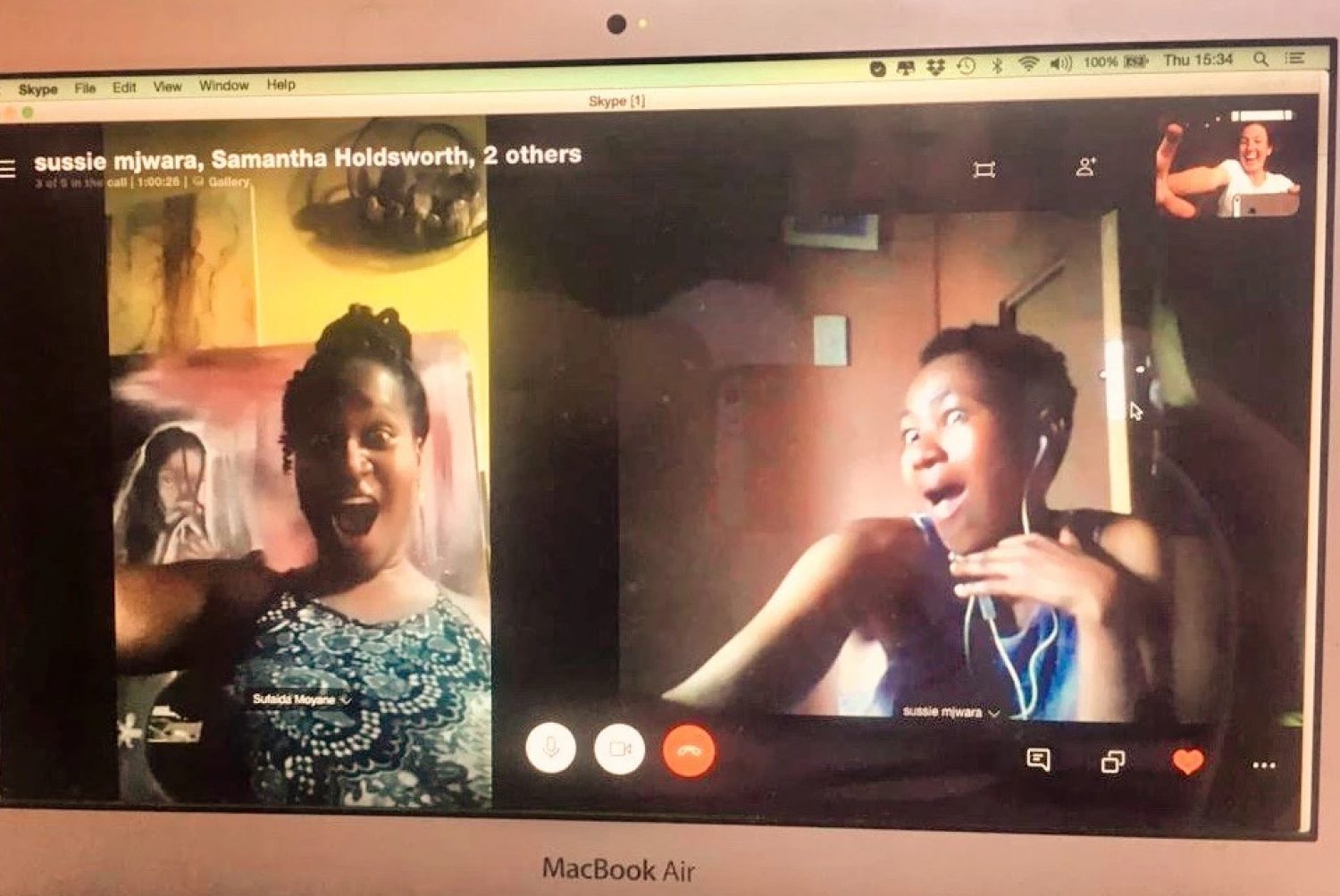 The charity has delivered remote learning and storytelling to girls in Mozambique. Image: Clowns Without Borders UK

“Together with a South African artist and two artists from Eswatini and Mozambique, we developed this project around using play to build trust and rapport with young girls,” explains Holdsworth.

Sussie Mjwara, the Mozambican artist who was involved, says the training was very well received. “I think that [often] these types of workshops are treated in a serious and very formal way and thus we lose people’s sensitivities. We reach them only through brochures and concepts. In Clowns Without Borders’ workshops, guided by laughter, fun and little games, we have the opposite. We can quickly establish trust”. So far, they have reached around 1,000 women and girls.

It’s been a challenging year, but Holdsworth says that Clowns Without Borders is accustomed to coming up with creative solutions and they’re incredibly grateful for how the prize money has helped them to continue their work during the Covid-19 crisis.

“Taking risks is sort of in our DNA, it’s how we operate,” she says. “No matter how hard it might be for me, sitting at my computer every day, asking myself, how am I going to do this, it’s never, ever as hard as it’s going to be for the people we work for.” 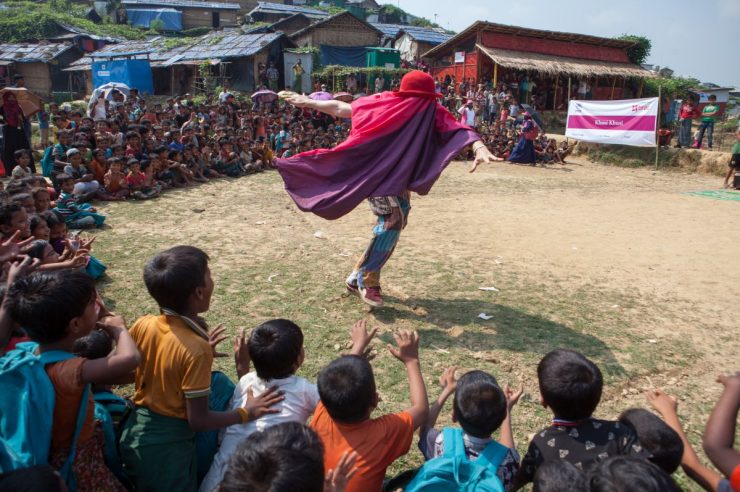 Positive.News | Brands of inspiration
‘Our need for joy is greater than ever’: Clowns Without Borders wins Kindness Awards A charity that uses clowns to bring laughter and respite to displaced children has won the inaugural Kindness Awards Written in partnership with Simple 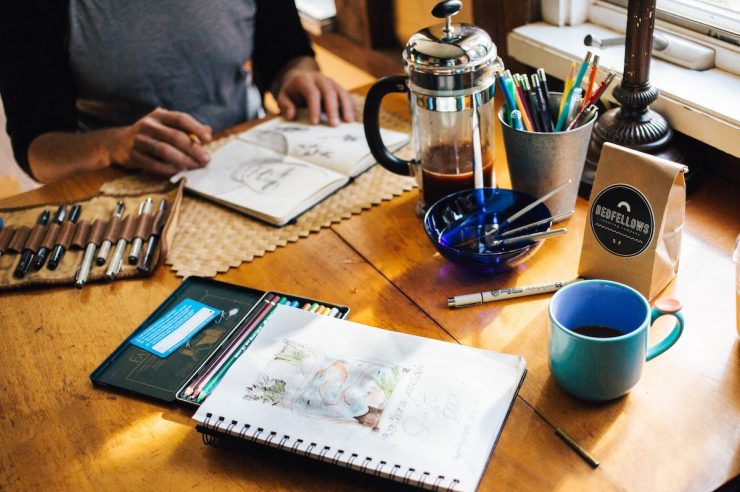 ‘Braver than I gave myself credit for’: what Positive News readers learned in lockdown We asked how you've grown in the face of the pandemic. A year on from the first UK lockdown, we share your insights Health Lifestyle Society Wellbeing