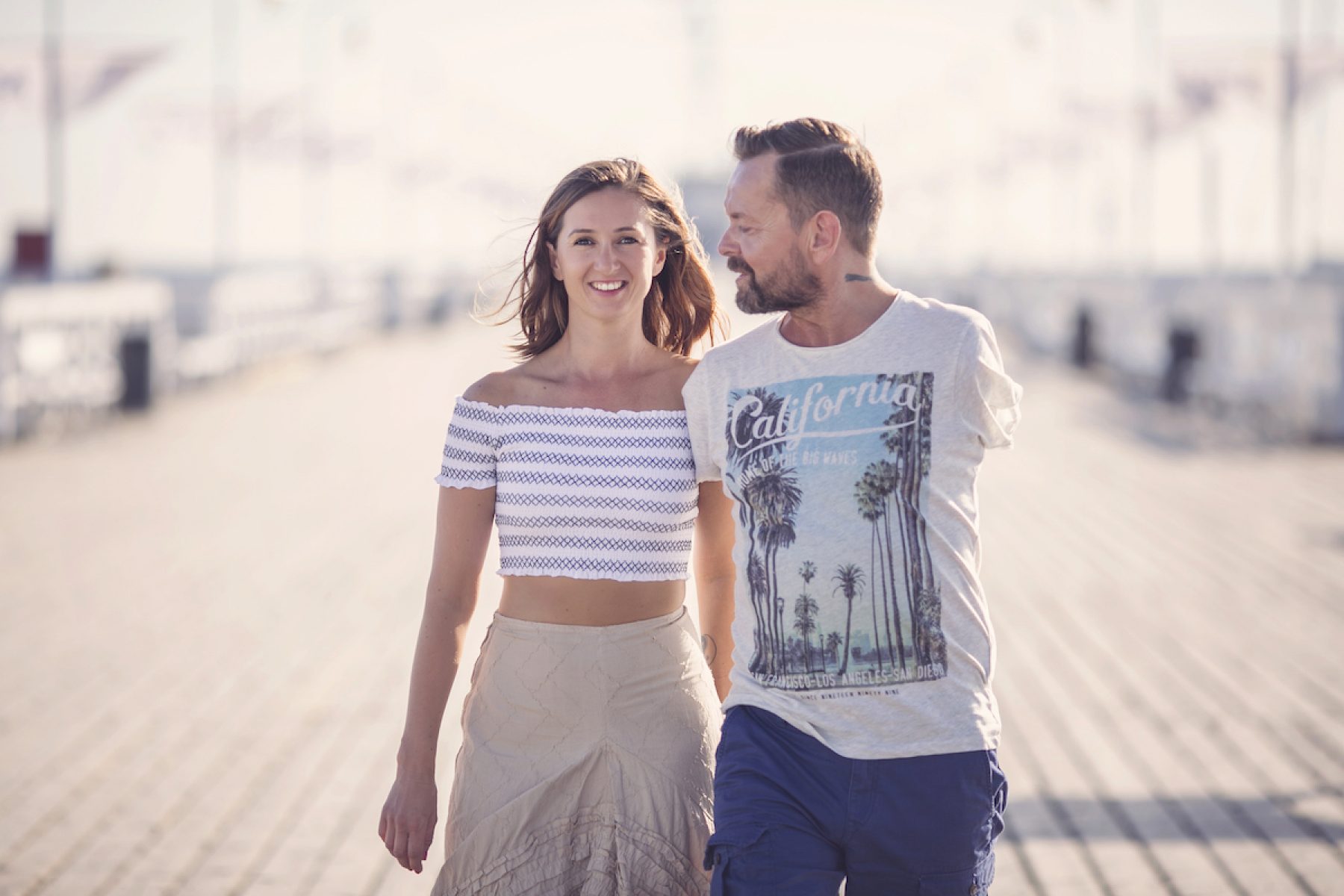 ‘I’m privileged’: meet the man who got new arms and shoulders

A man who had both of his arms and shoulders amputated 23 years ago is able to wave again, thanks to advances in medical science

A man who had both of his arms and shoulders amputated 23 years ago is able to wave again, thanks to advances in medical science

It was a bitterly cold morning in 1998 when electrician Felix Gretarsson was sent out to repair an overhead power cable in his native Iceland. It should have been a routine job. Only there was a miscommunication with his colleagues about which line he was supposed to be working on. At the top of a pylon, Gretarsson grabbed the live wire by mistake.

The 11,000-volt surge hurled him to the frozen tundra below, a 10-metre fall that broke his neck and back in three places. To make matters worse, his arms were on fire. Fortunately – and describing this as fortunate is a testament to his terrible luck that day – Gretarsson landed near a river. Quick-thinking colleagues rushed over to its banks, filled their helmets with freezing water and used it to extinguish the flames.

“I just remember lying there waiting for the ambulance and feeling pain in my belly because my body had shut out everything else,” Gretarsson tells Positive News. “I was put to sleep when I got to the hospital, and woke up three months later with no arms.”

Things got worse before they got better. Though surgeons initially amputated Gretarsson’s arms just above the elbows, infections forced them to keep taking more of what was left, stopping at the shoulders. “They were chopping me down piece by piece for the next 11 months,” he says. “My doctor said that in those first years, I had 54 operations.”

It is hard to fathom how someone might confront such trauma. How did he do it? Therapy? “My therapy was shutting it out with drugs and alcohol and general destruction for the next few years,” he admits. “I got to a place where they said: ‘you are either going to be dead or you do something’.” Alcoholics Anonymous helped him “turn things around”.

Unfortunately, the drinking put his liver, already frazzled from the accident, under additional strain, to the point that Gretarsson required a liver transplant. It failed, so he had another one two months later. 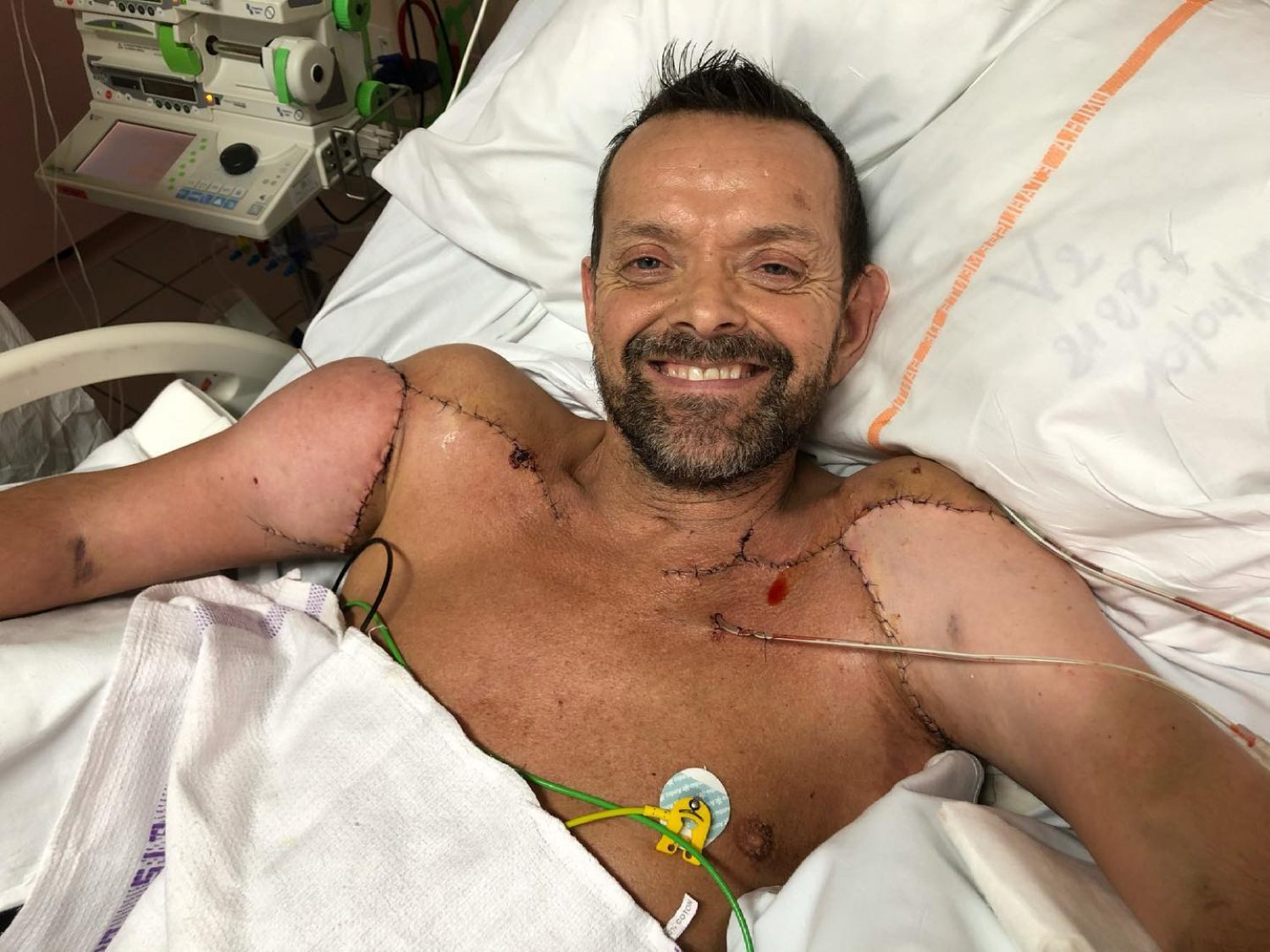 The procedure opened Gretarsson’s mind to the possibilities offered by transplants. With eager eyes, he followed news of the world’s first hand transplant in 1999, completed at Edouard Herriot hospital in Lyon, France.

By chance, the physician who conducted the procedure, Prof Jean-Michel Dubernard, visited Iceland in 2007 to lead a lecture about transplants. By then, his team had also conducted the world’s first face transplant.

Gretarsson tracked Dubernard down at his hotel and the physician agreed to review his case. News of the world’s first double arm transplant in Germany a year later gave Gretarsson more cause for optimism. He moved to Lyon to be nearer the doctors on whom he had pinned his hopes.

I came to France for arms, but now I have so much more

In Lyon, Gretarsson joined a Meetup group to brush up on the international language of medicine: English. It was in those classes that he met a yoga teacher from Poland called Sylwia, who he fell in love with and married. “We have two doggies and a very nice life here now,” he says. “I came for arms, but now I have so much more.”

After meeting Sylwia, Gretarsson stopped “waiting for the phone to ring” and got on with his life. Only the phone did eventually ring: in January this year, doctors called to say a suitable donor had been found and that they wanted to go ahead with the procedure. And so Gretarsson became the recipient of the world’s first double arm and shoulder transplant.

Surgeons hailed it a success, but with three years of rehabilitation ahead of him, it remains to be seen how much movement Gretarsson is able to recover. “If he can recover the possibility to actively bend his elbow, that would be a life-changer,” says lead surgeon Aram Gazarian.

The early signs are promising. “I feel nerves down to the elbow in both arms,” says Gretarsson. “That’s not supposed to be happening so fast. It’s amazing.” 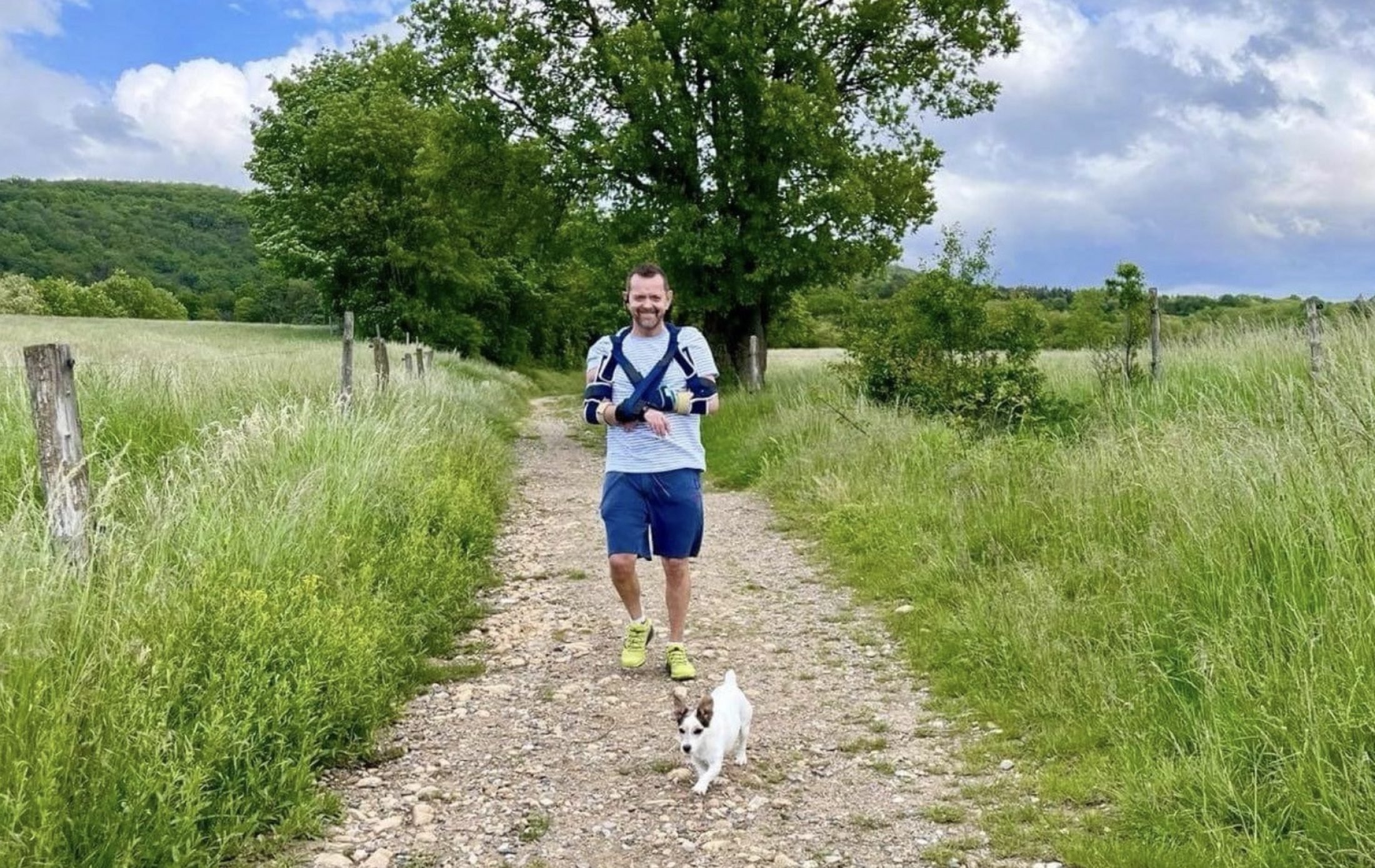 Gretarsson posts regular updates on Instagram, under the handle @felix_gretarsson. In one post, he was able to wave his right arm, albeit using mostly his shoulder for motion. In another, he makes light of his need for a manicure: along with the hair on his new arms, his nails have started growing. “I need my mum here to fix the nails,” he jokes. “She is the best one to do that.”

Despite everything he has been through and the questions that remain about what movement he will recover, Gretarsson finds humour and positivity in his situation. “I have a Danish liver, French arms – I’m a modern-day Frankenstein,” he jokes, adding: “No-one else has ever lost their arms and shoulders, and got them back. I consider myself to be very, very privileged.”

His wife, Sylwia, described the transplant as her husband’s “biggest dream”. However, at a press conference she told reporters that she didn’t think the procedure was necessary, as he “wasn’t missing anything” to her. 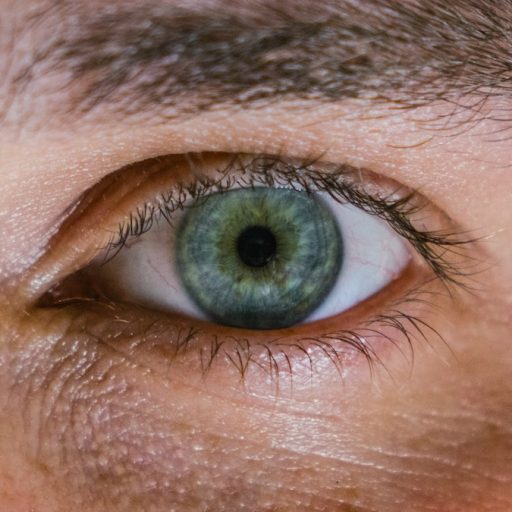 A once-blind man can see again, after becoming the world’s first recipient of an artificial cornea. Jamal Furani, 78, lost his sight to corneal disease a decade ago.

But in January he underwent a transplant in his native Israel and can now read numbers on a chart. The success of the procedure raises hopes for the estimated 10 million people living with cornea blindness worldwide. 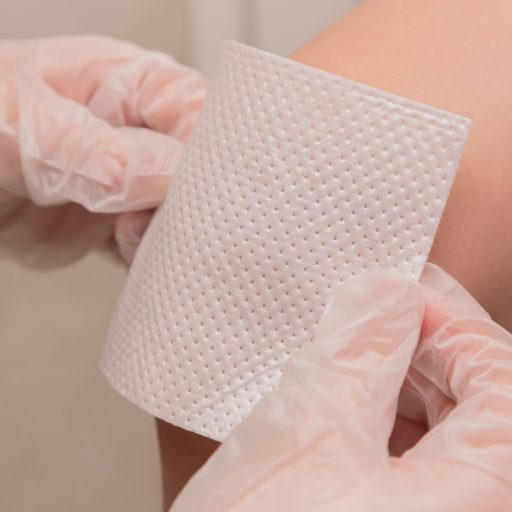 A medical gun that spins out a translucent, breathable, stick-on dressing could provide more effective treatment for burns. The Spincare system lessens the need for regular dressings (pictured), which restrict mobility and can be extremely painful to change.

The innovation by the firm Nanomedic is being trialled by doctors in Europe and Israel, where it is showing encouraging early results. 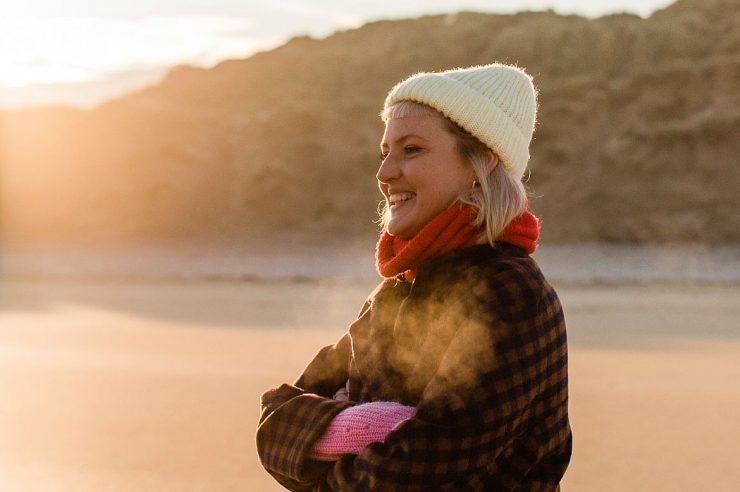 Alive and glittering: lessons from 12 years living with terminal cancer Twelve years ago, Kris Hallenga was told she only had a few years left to live. She talks about finding happiness after her diagnosis Body & Mind Health Positive People Wellbeing

How opera singers are helping people with ‘long Covid’ People suffering from lingering Covid symptoms are being referred to an unlikely place: the English National Opera Arts Culture Health Wellbeing 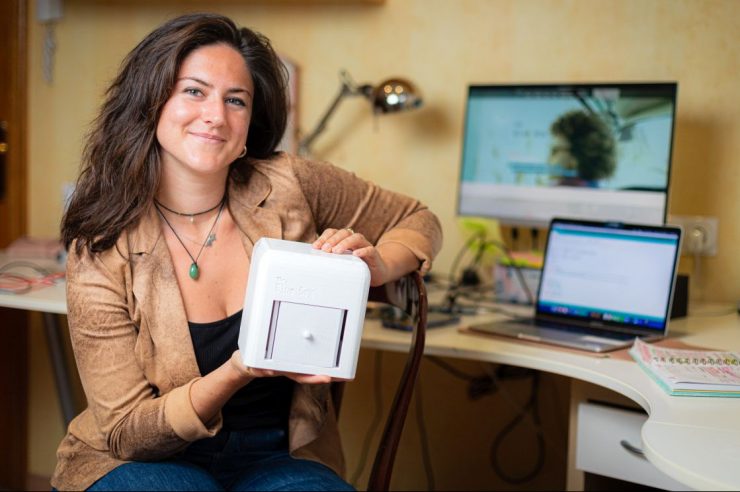