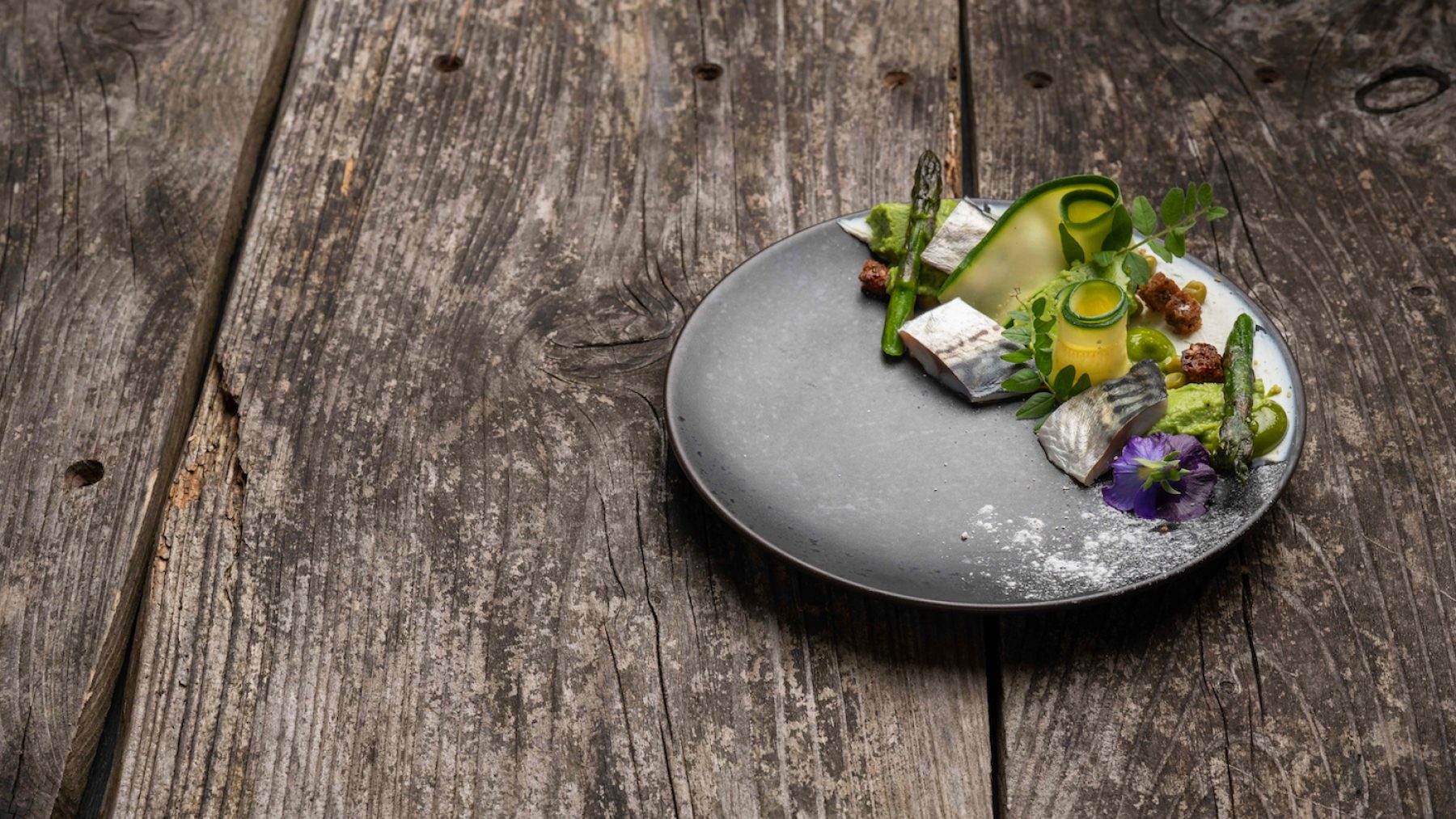 Inside the UK’s sustainable dining movement

A wave of progressive UK restaurants are going to impressive lengths to minimise their carbon footprint, from nose-to-tail food prep to composting

A wave of progressive UK restaurants are going to impressive lengths to minimise their carbon footprint, from nose-to-tail food prep to composting

At Native restaurant in Borough Market, the menu starts with an appetiser called ‘chef ’s wasting snacks’ – dishes created from leftover food such as bread, carrot tops and pickled garlic. The description might cause eye-rolling among some, but it underpins the sustainability ethos at this London restaurant. Here, an ethical stance goes far beyond local sourcing, strict seasonality and nose-to-tail – or even root-to-fruit – cooking. The chairs are made by the team from offcuts of wood, much of the kitchen equipment was bought secondhand from eBay, and the silver birch trees dotted across the restaurant floor in pots were foraged by the owners.

“Native isn’t a concept,” says Imogen Davis, who co-founded the business as a street-food stall with chef Ivan Tisdall-Downes in 2012. “We do what we do because we believe in it. We make conscious decisions about where everything comes from.”

This ranges from animal welfare – “we get videos of the cows on the supplier’s farm, so we know they’re treated well” – to keeping their carbon footprint as low as possible: “we walk to the market for our produce”. Davis was inspired by her parents, who ran an organic food shop when she was young, and says that focusing on quality enhances the flavour of Native’s dishes a “million times”.

The pair also aim for a zero-waste operation, right down to ‘nose-to-tail’ eating. “We butcher it [the animal] down and plan the menu around it,” explains Davis. “We want to embrace the whole thing. For example, we use bone marrow in our chocolate dessert, we’ll have a Sunday roast once a month using leftover meat, and then we turn it to charcuterie. So much care and attention goes into what we do.”

When it comes to restaurants, ‘sustainability’ has gone mainstream in recent years, with a number of pioneering restaurants putting it front and centre of their operations. The sector has its work cut out. The UK food and hospitality industry produces 600,000 tonnes of food waste every year, according to Wrap, the waste and resources charity. 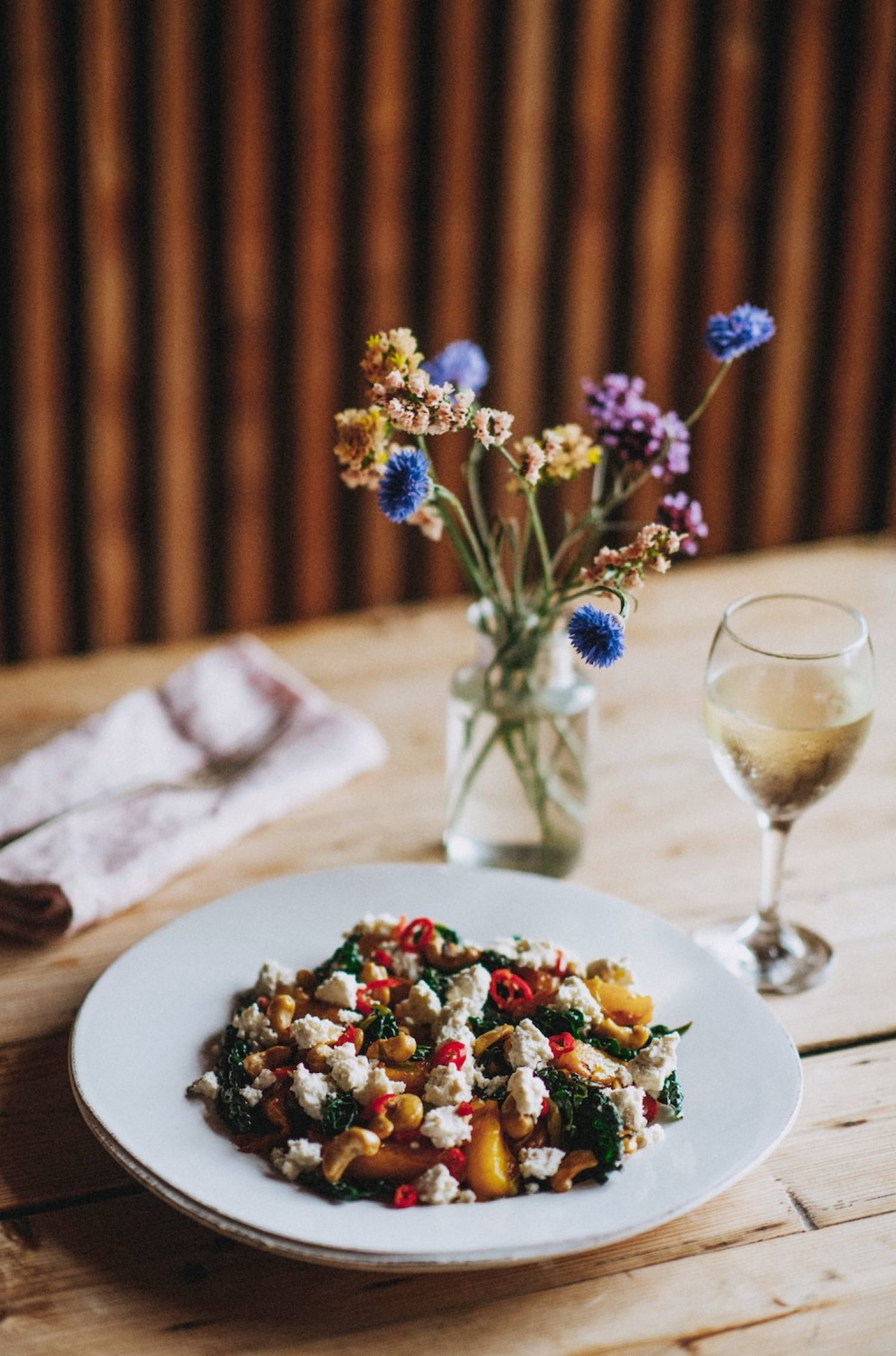 A dish made with cep mushrooms at River Cottage. Image: Matt Austin

Globally, a third of food produced for human consumption is lost or wasted – about 1.3bn tonnes per year, according to the UN Food and Agriculture Organization. And the demoralising statistics are not confined to food waste: agriculture generates a quarter of total global greenhouse gas emissions every year. Such figures cause unease in the food and drinks industry, and progressive restaurateurs are keen to do what they can.

To note a couple of examples, Portland restaurant in Marylebone, London, receives much of its fruit and vegetable produce from OrganicLea (a workers’ co-operative farm) via bicycle, while Forage & Chatter sources its produce from within a 25-mile radius of its Edinburgh site.

One person synonymous with food ethics is TV chef Hugh Fearnley-Whittingstall, a prolific campaigner on sustainable farming and animal welfare, and owner of restaurant group and cookery school River Cottage, which has outposts in Winchester, Bristol and Axminster. “Everything here is based on looking after the land, the people and the environment,” explains executive head chef Gelf Alderson, who works in close collaboration with Fearnley-Whittingstall on developing the company’s recipes and menus. “All the ingredients are thought about in great detail before anything is used.” 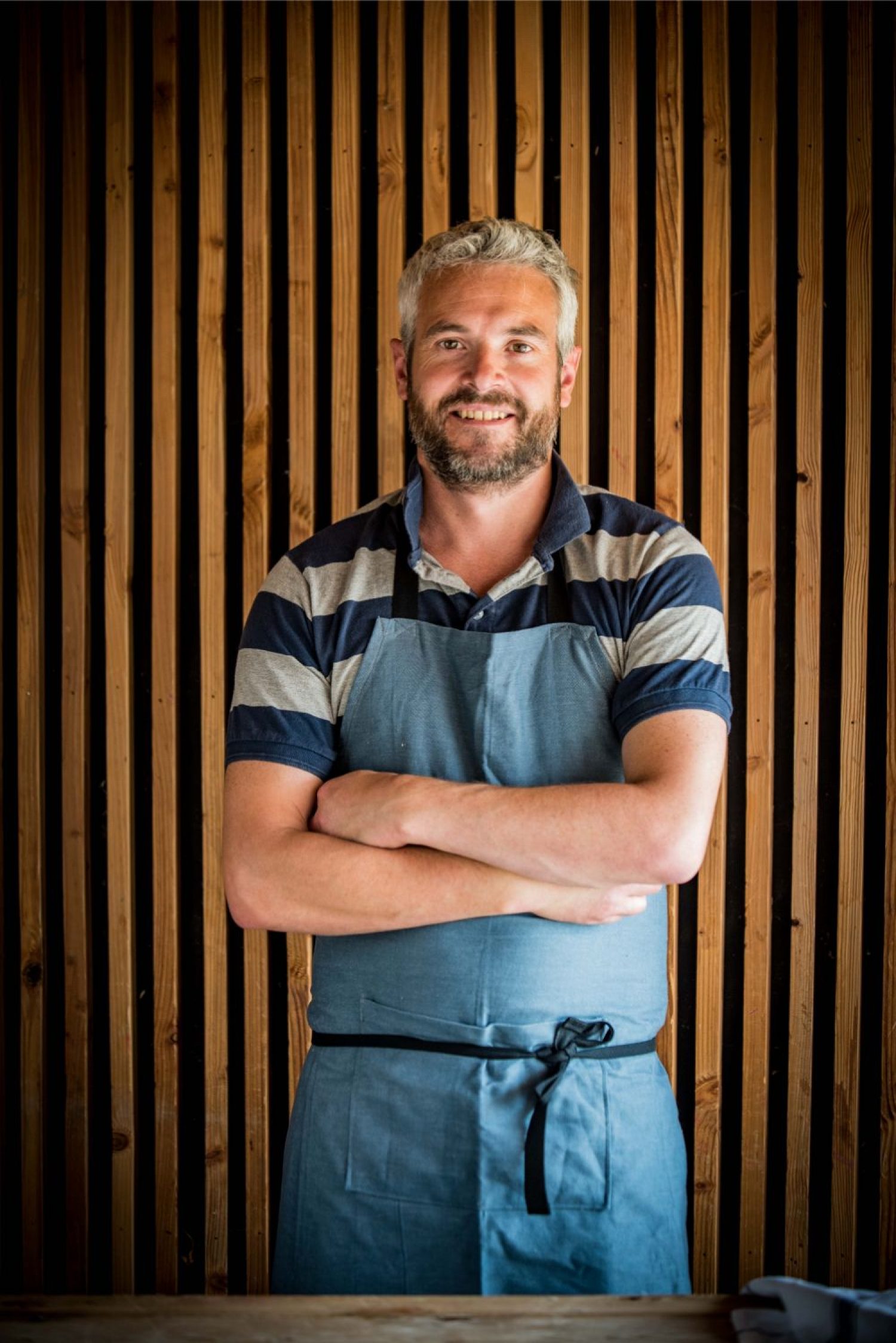 Apart from cheese, all of River Cottage’s dairy products are organic. Most (70 per cent) of the produce used at its headquarters, where it runs a cookery school and dining events, are from Park Farm, its 65-acre organic farm on the Dorset and Devon border. Here River Cottage keeps its own herd of cows, a flock of sheep, pigs (in the summer months) and chickens. The farm garden grows vegetables such as peas, squash, garlic, parsnips, chard and kale.

With an abundance of colourful produce right on their doorstep, the focus is, unsurprisingly, on seasonality.

“At the farm, we only use what is around,” says Alderson. “We’re fixed to that. Once the English apples are finished for the season, then we stop using them. In the bigger restaurants you won’t see us importing, and we change up the menu every six to eight weeks to adapt to what’s available.

“We don’t get too tied to a signature dish; it’s about using what is best and using our skills to enhance that.”

It’s about using what is best and using our skills to enhance that Gelf Alderson, River Cottage

With plant-based food currently the subject of a wave of popularity, River Cottage is increasingly putting more emphasis on vegetables. “Obviously we’re not a vegetarian organisation, but we are trying to make vegetables a hero ingredient for a lot of dishes,” notes Alderson.

River Cottage’s HQ is a zero-carbon, off-grid site that harvests rainwater from its buildings and uses drinkable water from its well, runs a biomass energy heating system to provide all heating and hot water, and has a wind turbine providing 20 per cent of its electricity. Another ambition is to be as close as possible to plastic-free.

“Our first goal was to go clingfilm-free,” says Alderson. “We have banned polystyrene being delivered into our restaurants. So, our fish now comes in corrugated plastic boxes, so it’s recyclable and reusable.”

It can be tough to implement, notes the head chef, as not everyone they work with upholds the same strict principles. “It’s about engaging with the supplier,” says Alderson, who adds that such a change in practices can be beneficial for the supplier too. “It’s a great thing for them to put on their corporate website.”

Similar sourcing principles apply at fish restaurant Angela’s in Margate. “We take that idea of thoughtful food sourcing and look at all aspects of our business, from the sponges we use, to the way we buy our rapeseed oil,” says co-founder Lee Coad. 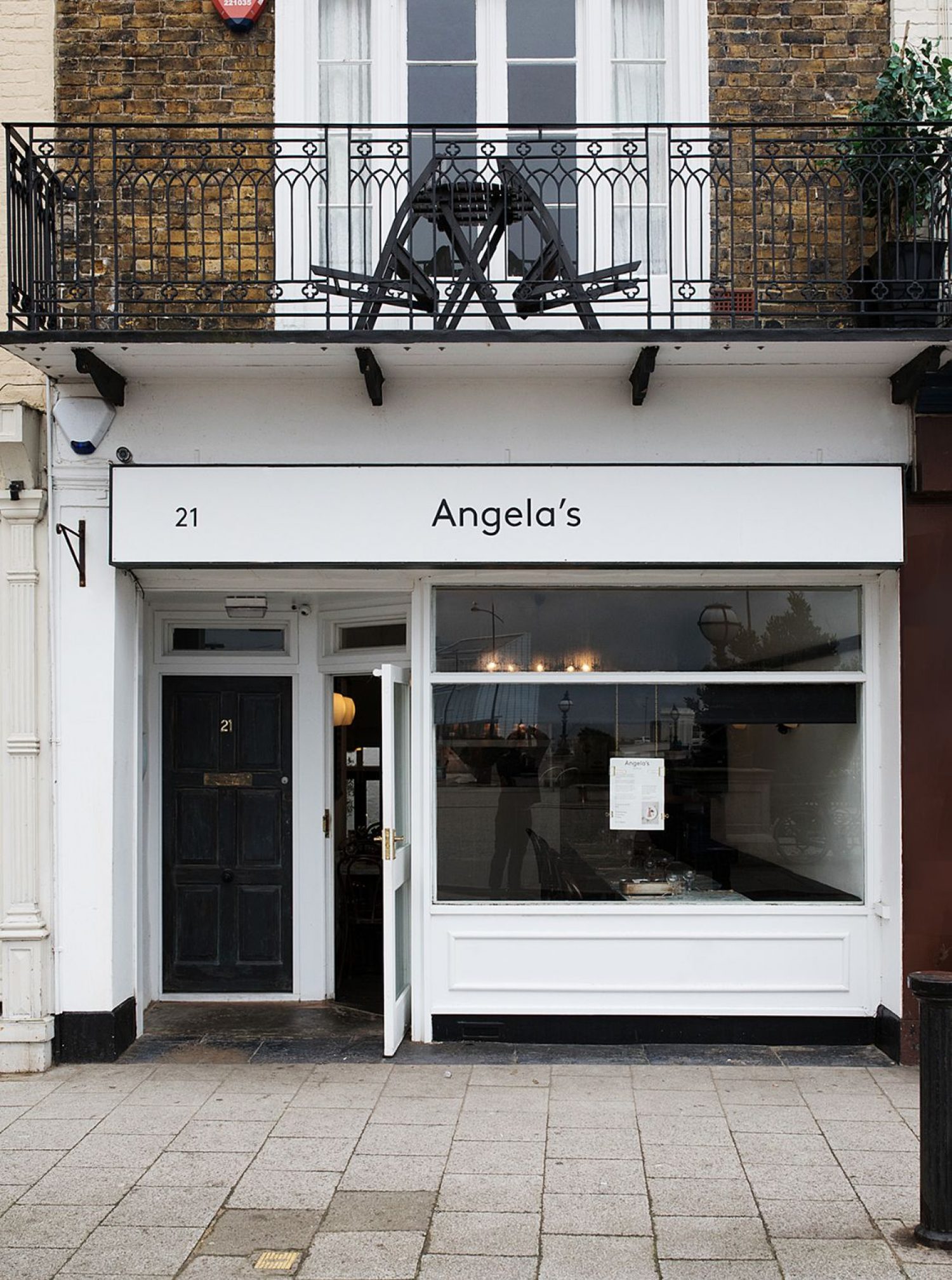 Angela’s in Margate, where leftovers are used to make compost

“We get our oil, coffee, butter, vegetables and fish without [one-use] plastic and in containers that are reused and refilled. Some are metal, some are plastic and some are wooden, but they are always reused. For example, the butter and dairy comes in metal containers that we wash and send back. The oil comes in 30-litre plastic barrels that we send back and they refill. The vegetables come in wooden and plastic crates that we take back when we’re finished with them.

“They all mean that there is never unnecessary packaging. In some cases, we are helping them to remove plastic from their production methods.”

Coad believes that the more suppliers are questioned about sustainability and, in particular, the question of plastic, the harder it becomes for them to ignore it. “If everyone asked the same questions of their suppliers, demand from consumers would outstrip the ease of using it,” he predicts.

One organisation that promotes sustainable practices in the industry is the Sustainable Restaurant Association (SRA). It gives the industry 10 key areas to focus on, including celebrating local and seasonal food and to ‘serve more veg and better meat’, and has developed an industry-standard Food Made Good sustainability rating. It also runs the annual Food Made Good awards, which last year named Poco Tapas Bar its Business of the Year.

The team at the Bristol-based restaurant are extremely serious about sustainability. Since the business was founded in 2004, it has increased its focus on vegetable-based dishes and staff are methodical and meticulous about reducing waste: 95-100 per cent of its food waste is composted and recycled. The team records the weight of its bin bags each day and plans to analyse the data in a bid to further reduce waste.

But can sustainability and profit go hand in hand? “Some elements are definitely more expensive. Organic and free range, for example, can cost more than produce that comes from factory farms, but there are definitely ways we save money too, such as using all of the animal or vegetable,” says Jennifer Best, co-founder of Poco. “Similarly, less waste is less money given to the refuse collector. But I think we have a responsibility to focus on quality and it’s possible to remedy the cost of organic meat, by celebrating the vegetable more.” 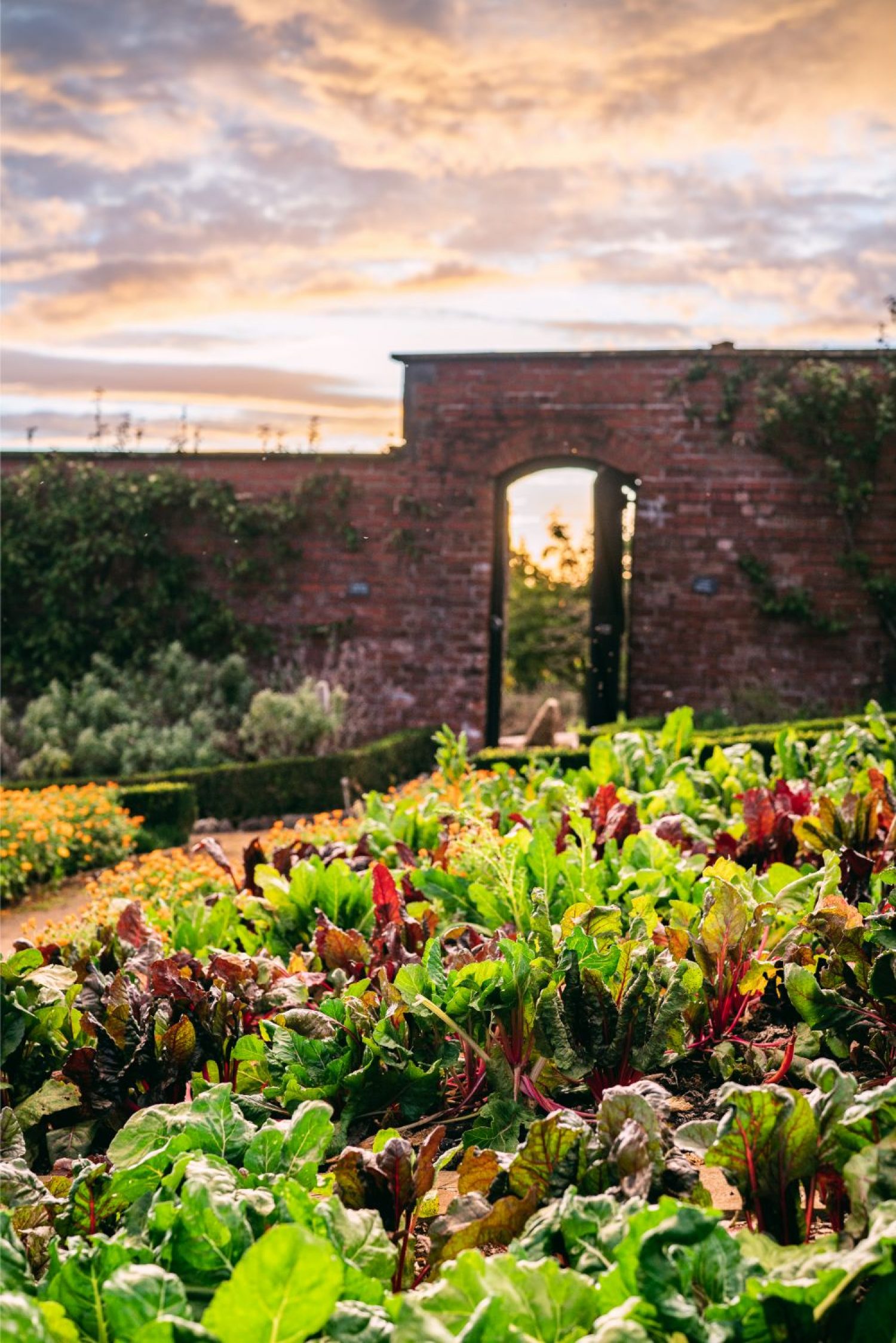 Vegetables ready for picking in the walled garden at The Ethicurean restaurant, near Bristol

That said, tricky dilemmas constantly emerge in the quest to be greener. “This morning I bought a teapot, which came in bubble wrap, and I was thinking that the alternative would be to travel somewhere, but then you’re getting in the car,” laughs Best. “It’s not black and white. But we’re being mindful.”

Rather than being stifling, many of the SRA restaurants believe that operating sustainably in fact pushes their creativity. “When we are limited by what we can use, then we have to be more creative with how we approach our menu and our business,” says Coad of Angela’s in Margate, which composts its waste in its own composter in a nearby community garden.

“It has definitely made us more creative,” agrees Best. “It’s challenging, but it makes you use your initiative and think. It’s almost more exciting to make something from what’s available. After all, that’s the chef ’s job.”

When we are limited by what we can use, then we have to be more creative Lee Coad, Angela’s

The SRA, which has more than 7,500 members in total, reports a 50 per cent increase in the number of members who redistributed their surplus food in 2018, to the likes of food waste and redistribution charities FareShare and City Harvest. The body expects that figure to grow this year. Stephen also sees sustainability becoming a permanent fixture on the menu for UK restaurants. “The time to act though is now,” he notes.

“By working together, by collaborating and inspiring each other to do more and go further, we can encourage a race to the top – a race towards a better food future.”

Featured image: Cornish mackerel with walled garden asparagus, courgette, pea and rye: a dish on the menu at The Ethicurean restaurant