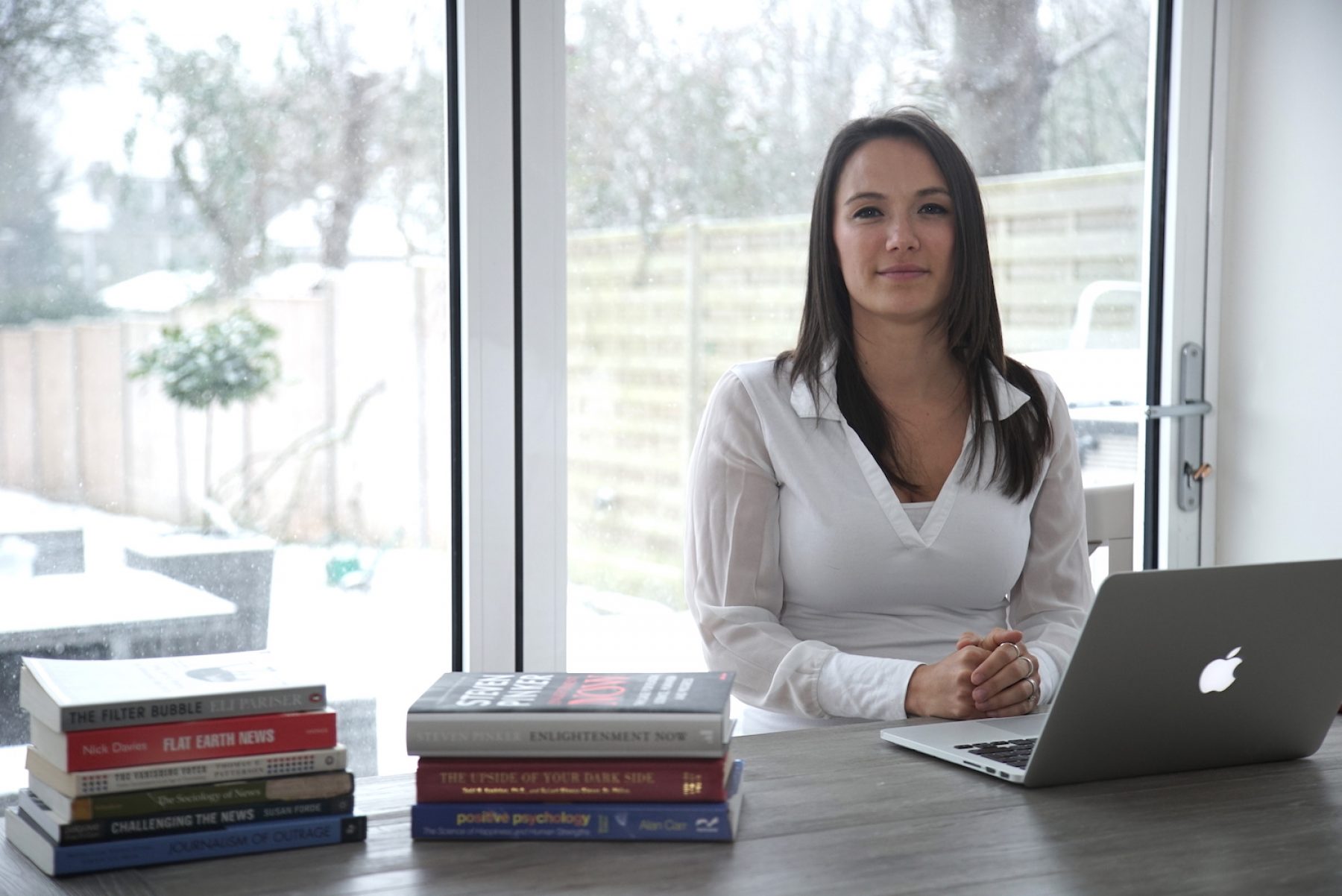 Why changing your news diet can change the world

The negativity bias in the news is causing social harm. But journalism can change, and news consumers have the power to help make this happen, says Jodie Jackson. Here, she shares her story of how she came to understand the impact of the news and create a healthier relationship with it

The negativity bias in the news is causing social harm. But journalism can change, and news consumers have the power to help make this happen, says Jodie Jackson. Here, she shares her story of how she came to understand the impact of the news and create a healthier relationship with it

Not long after my first child, Ariana, was born last year, my mother-in-law, Eva, told me she was worried about the world that Ariana will grow up in. “It is so much more dangerous than when I was young”, she said.

Eva was born during the second world war. Since then, globally, we have become more prosperous, with improved health, better technology, better sanitation, higher IQs, a lower rate of child mortality, fewer deaths from conflict, fewer homicides and there has been a reduction in overall levels of crime. So why would Eva think that the world is more dangerous now, than 70 years ago?

Over the last seven years, I’ve been researching the psychological impact that the news has upon people. I’ve looked into how it affects us mentally and socially, how it shapes our opinions about the state of the world, and how it influences the way we see ourselves and other people.

My response to Eva was to suggest that her belief – that the world is more dangerous than it used to be – lies in her perception. And that this is a perception created not through experience but by news stories. Because, if I ask her to think strictly of her own actual experience of the world, she would agree that overall things have improved. Her belief that things have got worse is not uninformed – it’s not that the news stories that have contributed to this view were not true. But it is an ill-informed belief, and an incredibly common one.

My efforts to understand how the news affects us began when I had reached a point where I couldn’t bear to hear another news story. I would switch radio or TV stations as soon as I heard the bleeps before the news. Some people said my avoidance of the news was naive, weak or extreme. At first, this made me feel that perhaps I wasn’t strong enough to see the world in all of its ugly existence. But in fact, my experience of the world is that it’s a remarkable and complex place, filled with adventure, imagination and kindness as well as cruelty, suffering, and injustice. I refused to allow the narrow, selective picture that I was being given by the news, to define, for me, how life is.

I started digging deeper, asking questions such as: why is negative news so prevalent? Why do journalists focus so much on wrongdoing? Does the media create or reflect opinion? Does the media report news that is in the real interest of the public or in the interest of its own commercial success?

What I found is that news organisations are aggressively protective of what they do. If I questioned the media’s integrity, I would be pushed back by the noble principles that underpin it. These are based on the idea that problems grow in the dark but shrink in the light; that it is the responsibility of the journalists to put them on the public agenda.

But much of the media reports whatever stories will generate profit, governed by audience engagement targets and advertising reach. Sensationalised journalism that might benefit a media organisation’s bottom line is hurting us psychologically and socially. Imbalanced reporting is giving us an imbalanced understanding of the world, leading us to believe it’s worse than it actually is. This pessimism has consequences that extend into politics for example, where leaders can prey on our fears and promise a restoration of the ‘good old days’. In the 2016 US election, 81 per cent of Trump’s supporters believed that life has got worse in the last 50 years. If we look at the evidence rather than the news, we can see that overall, Americans today have a comparative advantage in terms of disease, accidents, nutrition, medical care and life expectancy. ‘Does the media report news that is in the real interest of the public or in the interest of its own commercial success?’ Image: Thomas Charters

Focusing on what’s going wrong wasn’t always the intention for the news. Walter Lippmann, one of the most influential journalists of the 20th century, defined the news as “the publishing of new and notable information in order to engage and inform citizens in a way that empowers them to be able to act on the information presented”. The American Press Institute has a simpler take: the purpose of the news is ‘to empower the informed’. There’s nothing in either definition that means negativity should prevail.

As I studied psychology, I realised that the problem with this imbalance is that the way information is processed in our minds means that a media narrative can become equivalent to personal experience. Media ‘inputs’ can form our memories, knowledge and beliefs, just as the other experiences in our lives do.

It’s well evidenced that the more a topic is covered in the news, the more important it is considered to be by the public. But the news does more than simply tell us what to think about, it also tells us how to think about the issue, through the way in which information is framed. By reporting mostly with a negative focus, this narrative, rather than reality itself, can then become public opinion.

Media ‘inputs’ can form our memories, knowledge and beliefs, just as the other experiences in our lives do

Having understood the problem with the negativity bias in the news, I came to ask: what would it take to keep me informed in a way that engaged me? That’s when I discovered the concept of solutions-focused news.

By widening my media focus, I was inspired by the initiatives, advancements and solutions I would read about, which are creatively tackling the problems about which we are so well informed. This helped me feel more connected to the news and, more importantly, more connected to society and my own potential within it.

What began as anxiety born from hearing so many stories of violence, terror, disaster, murder and corruption, had transformed into something else. On one hand, I felt inspired, energised and empowered by learning about solutions. On the other hand, I felt anger towards the news organisations that had given me a false, incomplete picture of reality. The hypocrisy seemed absurd to me; news organisations that pride themselves on shining a light on the world’s ills have been allowing their damaging social impact to grow for years because no one is shining a light on them. For seven years, Jackson has been researching the psychological impact of the news on people. Image: Rabbit Island Productions

So, who holds the media to account? Perhaps, ultimately, it’s up to us as consumers. It’s time that we start making choices around the media we consume – choices that positively impact our wellbeing and that of the world at large.

My hope for Ariana is that she, and her generation, will grow up with a new awareness of how the news affects us. They will shape their own media diets, becoming aware of the problems the world faces but engaged with all the possibilities for change. This will nurture yet more progress, and Ariana will look back and say the world may be troubled but it’s a great time to be alive.

Jodie Jackson is author of You Are What You Read: Why Changing Your Media Diet Can Change the World, published by Unbound.