Humanity and kindness amongst the horror at Calais

“It is a horrible place, all you can do is understand.” A text message from my Mum on arrival at the Calais refugee camp. Ironically at that moment I was thinking what an amazing place it was – people greeting us with broad smiles and handshakes, a place full of respect, openness, friendship and warmth.

I was part of a group of about 80 cyclists who took part in a social media-organised Critical Mass bike ride. We rode on second-hand bicycles from London to Calais to donate them to those in need living in the refugee camp.

The camp itself, also known as the Jungle, is five kilometres from Calais centre, where many of the refugees have to go daily to fill out the various bureaucratic forms and to look for work. The donated bikes will be used to make the journey between the camp and Calais easier and quicker. A three-hour round trip on foot reduced to an hour with a bicycle.

In the camp I met people from Darfur in Sudan where there has been genocide and civil war for over a decade. I saw scars on people’s bodies from torture, I saw photos of children and families left at home – living in abject poverty, but still smiling. I met people from Kurdistan in Iraq, which since last year has been under the control of ISIS-aligned forces, their people persecuted for their ethnicity. I met people from Syria, Afghanistan, Yemen and Pakistan. All of these people fleeing poverty, violence or both.

“Beneath the tragedy lies a painful, beautiful humanity of the most raw kind.”

We arrived en masse to hand out the bicycles – but the reality of the scale of donation and help that is needed there is beyond what our small party could offer. Beyond bikes, tents and sleeping bags, they need building materials, English language learning books, solidarity and most of all asylum.

We were mobbed for our bicycles before we could distribute them. We found ourselves in a situation where our ideals of what was deemed fair and just were directly challenged by the real situation of desperate people fighting for survival. 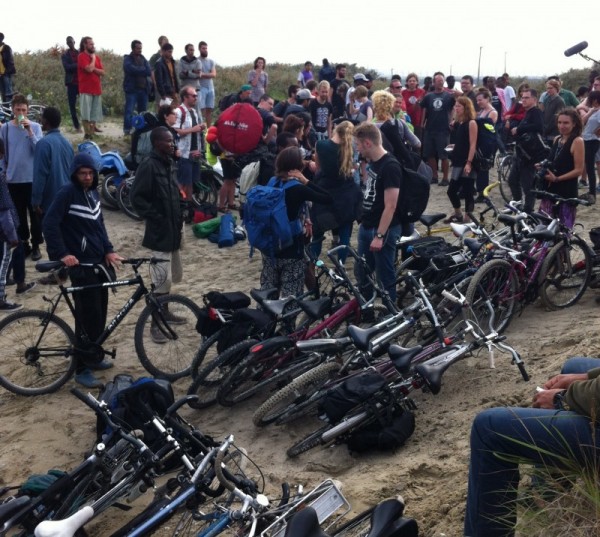 Arriving with the bikes at Calais © Rosie Strickland

At exactly the right moment, a thunderstorm broke. I had been talking with Italian photographer Valerio Muscella during the bike squabble, watching the scene unfold as groups of young men ran across dunes carrying locked bundles of bikes. The general feeling in our group was that we had failed in our mission to deliver bikes to the most needy, we had seen them disappear, and we were left bereft in the middle of a lawless jungle of desperate people.

As the storm broke a young guy from one of the nearby huts skipped across holding a steaming mug and handed it to Valerio. He offered me one too, which I gladly accepted – a hot, sweet, Sudanese coffee. As the storm worsened we were invited into his small abode on top of a sand dune. Shell-shocked from the raucous bike handover, wet from the storm and without a place to go, suddenly the tables had turned as to who was helping who. It’s amazing how quickly you can make a friend in dire situations.

The night we shared in this simple hut was long but life-changing. We shared conversation, beer, nibbles and cigarettes. We conversed in Arabic, English and French, and tried to teach each other words and phrases in our respective languages. Our conversation didn’t go beyond the here and now. It was in our shared vulnerability, in that moment, that our inherent capacity to survive and take care of each other emerged.

“Suddenly the tables had turned as to who was helping who – it’s amazing how quickly you can make a friend in dire situations.”

I made friends in the camp that I will probably never see again. I discovered a strength in my humanity that can stretch beyond borders, nationhood, ethnicity or language. I saw clearly the journey my new friends had made, and I saw equally clearly the shaky foundations my own privileged life was built upon. But despite our apparent differences, even just for that moment, we were all in it together.

Tragic nuances pass you by as everyday occurrences in the Jungle. The man that leaves silently to go to the station to try to get to England, no-one says goodbye because they want him to get there, yet no-one says farewell because they want him to come back; the sincere apology that they cannot offer you dinner because the rain put the fire out and there is no gas. But beneath the tragedy lies a painful, beautiful humanity of the most raw kind. The eye contact across a dark hut with rain hammering down, a shared glass of beer, laughter, a coat thrown over your shoulders, a life story shared, the joy of music and learning lyrics in a different language; the self-respect in refusing charity, and in contrast the relief of an equal exchange.

We left the camp with a deep sense of irony and of our own privilege. How can it be possible that we can walk away, board a ferry, and reach England so easily when our friends fend for their lives in a lawless, sometimes ruthless, and filthy camp, fighting to be recognised as human?

The situation that drives people to the Jungle is political and economic, divorced from our common humanity. The camp in contrast is distinctly human. Kindness often prevails and despite the difficult circumstances, people look out for each other. 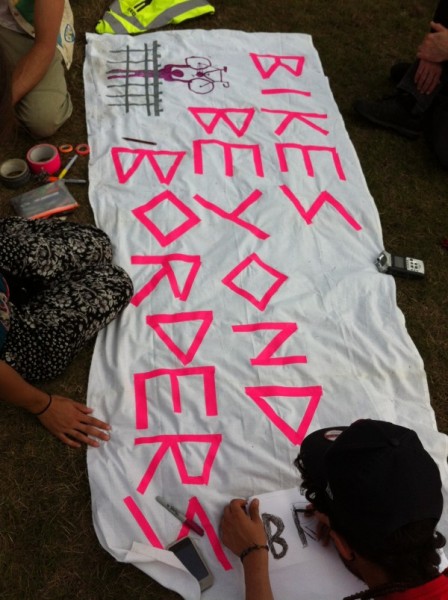 There are many ways to help the people in Calais – visit a camp and meet the people there, join a donation effort for desperately needed items, donate money into a local refugee fund or start up a support group of your own.

On Saturday 12 September there is a Solidarity with Refugees demonstration in London urging the UK government to do more. For more information see the Facebook event.