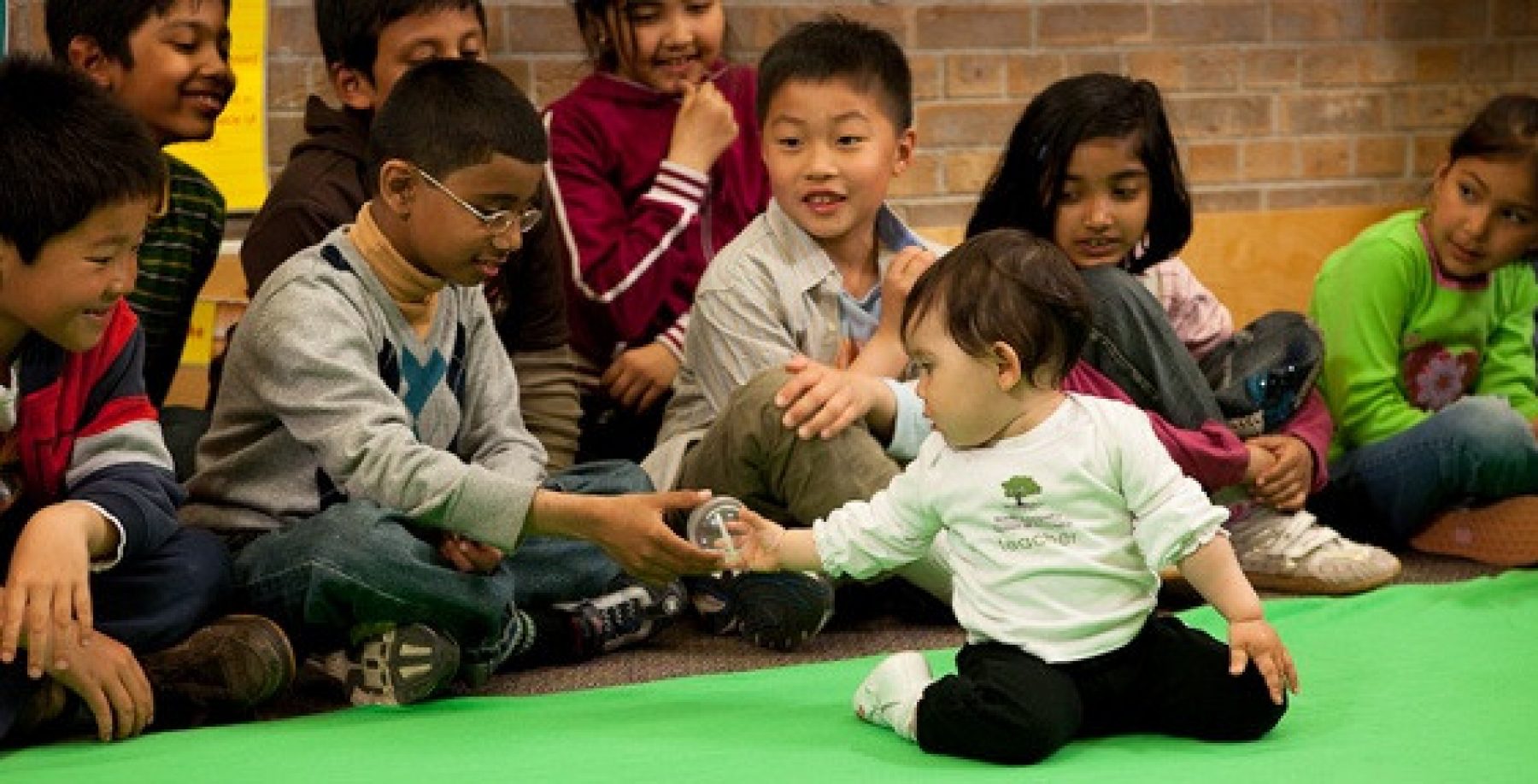 In thousands of schools around the world, children aged 5-12 take lessons from a newborn baby. The result? Increased emotional intelligence, understanding and empathy

It looks like an ordinary year five classroom in the Lucas Vale Primary School in the London borough of Lewisham. Colourful posters and artwork cover the walls and hang from the ceilings. A group of ten and 11-year-olds talk and laugh as they get up from their desks. A woman walks in with a baby in her arms and immediately the chatter dies down. The children gather around a green blanket and burst into a welcome song: “Hello baby Sienna, how are you today?”

I’m witnessing a Roots of Empathy session in action. It’s unusual education on all levels. The subject matter isn’t maths or literacy but empathy, and it’s not a teacher but an infant who guides us. Instructor Suzanna Fix had warned me ahead of the session: “On the green blanket empathy is caught, not taught. The baby’s mood is infectious. Her feelings are recognised and shared by all the pupils, and the boys are just as involved as the girls.”

In the classroom, her words ring true. Some of the boys seem embarrassed to sing and try hard to look disinterested. They succeed only briefly. Sienna’s mother, Lori Knight, makes her way around the circle and holds up her baby in front of each pupil. Sienna smiles and every child in the room smiles back at her.

Since the launch of the programme in Canada in 1996, its mission has been “to build caring, peaceful and civil societies through the development of empathy in children and adults.”

When founder and educator Mary Gordon first brought a baby into a classroom, she was convinced it would help solve what she saw as one of the world’s big problems: the lack of human empathy. Guiding young learners through a journey of personal discovery and a greater understanding of their classmates’ feelings could, she believed, have a lasting effect. Ultimately, she hoped it would create a generation of responsible citizens, responsive parents and emphatic leaders.

“At this age, children can be quite selfish, but I see random little acts of kindness that they never used to show”

Eighteen years on, some of those theories and effects have been confirmed through research. More than half a million school children have followed Roots of Empathy and its little sister programme Seeds of Empathy for toddlers. The programme has spread from North America to New Zealand, the Isle of Man and Ireland, with translated versions being rolled out in Germany and the Spanish-speaking world.

Independent comparative and randomised controlled studies have measured the behaviour of children taking part. Almost 80% of Roots of Empathy students worldwide show “increased peer acceptance” and two in three show “increased pro-social behaviour traits”. Researchers at the University of British Columbia also looked at specific types of aggression, and all studies showed a significant decrease in bullying levels. Data published in Healthcare Quarterly shows that the positive impact lasts for at least three years after the programme ends. The same research team is currently conducting a follow up study in Manitoba province and early findings suggest that Canadian children who took part in the programme six years ago still benefit from the effects. The full results are expected next year.

In the UK, the programme started in 2010 in partnership with the charity Action for Children, which helps support vulnerable and neglected children. Last year, Scotland became the first country to deliver Roots of Empathy in every council area, following £1.2 million of Scottish Government funding. North Lanarkshire Council’s Psychological Service conducted its own study into Roots of Empathy last year, which showed that the programme significantly increased empathy and reduced aggression in Scottish students. It is also being rolled out in England, Wales and Northern Ireland.

The programme is most frequently implemented in schools in resource-poor areas: those with the highest level of children requiring additional academic support or that report problems with bullying or aggressive behaviour. At Lewisham’s Lucas Vale, 43% of pupils do not have English as their first language and 40% are eligible for free school meals (compared to the Department for Education’s national average of 18% of pupils in all state schools in England in 2011).

Today’s session at Lucas Vale is the seventh family visit of the school year, with two more to follow. In the weeks before and after each visit, a trained Roots of Empathy instructor facilitates preparation and evaluation sessions. A different theme is explored each month: from crying to caring and planning, emotions, sleep and safety.

This afternoon baby Sienna ‘teaches’ the group about communicating. When she makes a crying sound, the children are encouraged to discuss why that might be. “She cries because she can’t yet speak to tell us how she feels,” offers one boy. “Or maybe she is hungry or tired,” says another.

Instructor Fix puts two plastic balls in front of Sienna. “Remember what happened when we did this last month?” she asks the class. Many kids raise their hands, keen to share their insights. “She got frustrated because she couldn’t pick up both!” It takes just a few seconds for baby Sienna to grab a ball in each hand and bang them together. The classroom erupts in celebratory cheers. Fix relates the action back to the neuroscience in child development: “She’s making a connection in her brain right now which relates the movement to the sound.”

In Roots of Empathy, students learn that ‘love grows brains’. Through the recurring family visits, the children become interested in the brain development of the baby. Each ‘tiny teacher’ has to be two to four months old at the start of the school year, so that the students can observe the greatest learning period of a person’s lifespan. The parents are found locally to reflect the neighbourhood’s diversity. They can be mums and dads or single parents as long as they are at ease in their parenting role, so they can provide a working model of responsive and responsible parenting to the students.

Year five teacher Juliet Uzur has been with her class for two years in a row. She has witnessed a change in her pupils since the Roots of Empathy programme started last September. “They are more vocal about how they feel. Miss Fix has got a way of getting them to talk about their feelings and that continues after the visit ends. We had one session talking about grief, and a boy who used to get really angry in class opened up. He shared with us that his grandfather had killed himself. The other children were very respectful. At this age, children can be quite selfish, but I see random little acts of kindness that they never used to show. They have become a bit more caring towards each other. It has been really nice.”

“We can see the results in the classroom. The programme has broken down barriers between the students and their teachers”

At the Roots of Empathy headquarters in Toronto, Gordon and her team have developed a research-based curriculum for each primary grade. So far, studies show that the intervention is similarly effective at every grade level. Gordon says that it depends on the preference and objectives of the school as to what year they choose for the programme. “If you want evidence of reduced bullying, you offer the programme to eight to ten-year-olds who have started to bully, so you can see evidence clearly,” she explains. “But if you are interested in pure prevention, then the younger the child, the better. Students will be able to build better friendships and relationships throughout their school life. That is protective to them: it is their bulletproof vest.”

Ultimately, the programme is all about relationships, says Gordon. “What’s comforting and hopeful is that even a five-year-old is able to understand that we all share the same feelings. Roots of Empathy studies the first and most important relationship in life and children completely understand this. It is as adults that we sometimes get lost in other goals.”

Critics of the Roots of Empathy programme argue that using up valuable school time to teach empathy is time away from cognitive and academic skills. Gordon cites a body of research, including studies published in the Journal of Creative Behaviour, on the role of empathy in education that shows that there is a strong connection between the understanding and experiencing of emotion and cognitive ability.

In her book Roots of Empathy, changing the world child by child, which was first published in 2005, she puts it as follows: “Experiencing an emotion by its very nature requires cognitive skills. To arouse your nervous system, you have to be aware that something has changed in your environment and be able to understand and interpret its implications for you. We do this every day, some of us more skilfully than others.”

Earlier this year, an independent advisory group to the UK government conducted a six-month review of England’s education system. In its report, Making Education Work, the committee concluded that the school curriculum needs more emphasis on “team working, emotional maturity, empathy and other interpersonal skills,” which it says are “as important as proficiency in English and mathematics in ensuring young people’s employment prospects.”

World leaders and spiritual leaders alike have been calling for the recognition of empathy as a crucial skill that we should teach our children. President Barack Obama declared a “national empathy deficit” in 2008, while the Dalai Lama approved of Roots of Empathy when he and Gordon met in Canada. His teachings have long called for “true compassion … based on the simple recognition that others, just like myself, naturally aspire to be happy and to overcome suffering, and that others, just like myself, have the natural right to fulfil that basic aspiration. The empathy you develop toward a person based on recognition of this basic fact is universal compassion.”

Gordon’s work has provided some interesting insights into how universal compassion can be fostered. When many years ago she recruited the first parents who wanted to be involved, she thought they must all be exceptional. “But guess what?” she says. “There is something about being a parent that makes you want your loving relationship with your baby to help children develop empathy. It is an incredibly powerful thing.”