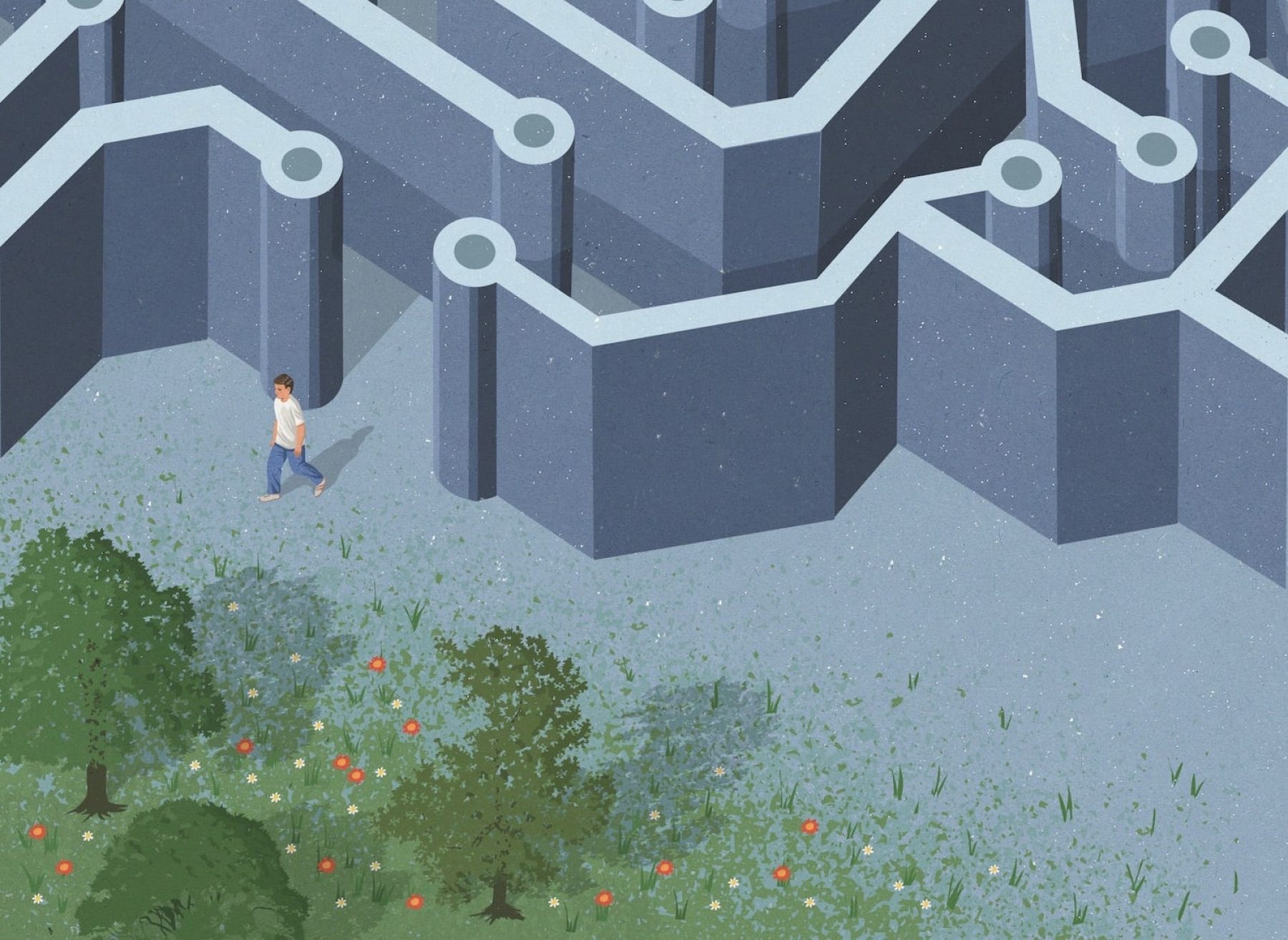 The big disconnect: how to tackle tech addiction

We’re more digitally connected than ever before, and it’s having a chilling impact on our health, wellbeing and relationships. But society is also taking steps to deal with this new and growing problem. How do we save ourselves from internet addiction?

Holed up in his room, half-starved and too wired to sleep, Andrew Fulton spent his first few weeks at university living like a fugitive. Had alcohol or drugs been his poison, the other students might have clocked the danger he was in sooner. But Fulton had been undone by his craving for a different fix: the adrenaline-fuelled highs from online video games.

He had first turned to the internet as a refuge from the anxiety and alienation that lingered throughout his school years. But by the time  he was 19, Fulton became so consumed by his obsession that nothing seemed to matter unless it was happening on his screen.

“Any time I wasn’t on the computer, I was lightheaded, I was angry, I was anxious, I was hungry,” says Fulton, who is now 23. “But when I was back on my computer I felt normal. It was like my IV line; my nutrients.”

He set out on a painful journey of recovery, and eventually managed to turn around his relationship with computers. It was marked by several bouts of avoiding the issue, and multiple setbacks which he concedes nearly killed him. Key to his success was a rehabilitation centre in the US called reSTART.

Nestled in hill country outside Seattle,  about a two-hour drive from Fulton’s home town of Ellensburg, the organisation runs highly structured residential programmes for people – mostly young men – who are battling to escape the seductions of the virtual world. There is a structured routine with time for exercise, recreational activities, group therapy and learning life skills like cooking, cleaning and doing laundry. Participants live together in a house and can stay for months. Already, more than 200 people have attended programmes and the team has received more than 10,000 telephone queries about its work. Demand  has grown so much since the centre opened in 2009 that reSTART has launched a scheme for young people aged 13–18 at a new campus called Serenity Mountain.

Any time I wasn’t on the computer, I was lightheaded, I was angry, I was anxious, I was hungry

While Fulton’s addiction was severe and extreme, technology’s lure is something most of us can identify with. Amid an unceasing torrent of distractions from social media, smartphones and messaging apps, many of us feel enslaved by our devices. Though Fulton only began the hard work of recovery when he realised there was no other choice, there are signs that people are increasingly reassessing their use of devices.

“It’s about asking what our current relationship with technology is and reframing that in a more positive, balanced way,” says Orianna Fielding, founder of the Digital Detox Company in London, which advises companies how to help their employees better manage their digital lives. “It’s about enlarging our offline life by reshaping our online life.” This shift is overdue, particularly in Britain, where young people seem especially susceptible to tech overuse. According to a report by the Education Policy Institute thinktank, more than one in three British 15-year-olds are ‘extreme internet users’ who spend at least six hours a day online. This figure is higher than in all the other 34 Organisation for Economic Co-operation and Development countries, apart from Chile.

The older generation seems by no means immune: just ask the many teachers exasperated by parents who dismiss their children’s bids for attention with an offhand “Yes, dear” as they idly scroll through their phones. Among them is Liz King, headmistress at St Joseph’s primary school in Middlesbrough, who had signs erected at all three entrances to the school last year that read: ‘Greet your child with a smile, not a mobile.’

It’s about reframing our use of technology in a positive, balanced way: enlarging our offline life by reshaping our online life

Part of the challenge, as former tech industry executive Anastasia Dedyukhina points out, is that internet giants pour vast resources  into ‘weaponising’ their apps. In an age when attention is currency, our brains are being hacked to make other people a great deal of money from advertising.

“My clients just think that they are not self-disciplined enough or that they should be trying harder,” says Dedyukhina, founder of the Consciously Digital consultancy. “That’s why  I think we need to raise more awareness about what’s really going on: it’s like trying to stop eating chocolate when it’s being offered to you every minute of every day.”

Dr Richard Graham, a psychiatrist at  the private Nightingale Hospital in London who specialises in internet addiction, notes that the compulsion to constantly check our phones is hard to resist because it feeds the reward centres in the brain, releasing dopamine whenever  we get a new message or notification. “When electronic devices start to have more in influence over behaviour than anyone else or any-thing else, that is the moment when really you need to start changing things.”

Mindful of how difficult it can be for employees to disentangle themselves from online snares, employers are taking action. Some corporations, for example, have declared ‘digital sunsets’ – forbidding employees from sending work emails after a certain time. Others have banned texting during meetings and encouraged people to drop by a colleague’s desk instead of emailing. The market for ‘digital detox’ retreats and ‘digital wellness’ advice is growing.

Tough as it can be to demote technology from master to servant, most adults have at least one crucial advantage: they can remember life before the smartphone took off in 2009. The ‘digital natives’ – those whose first encounter with a camera phone probably occurred seconds after they left the womb – are not so blessed. Fulton traces the roots of his addiction to the age of four, and experts are worried that too much screen in early life makes adults much more vulnerable to tech temptation. “Parents know not to hand drugs and alcohol to children, but they do hand gaming devices to their young children without any concept that this is actually influencing their child’s brain like a drug,” says Hilarie Cash, a psychotherapist and co-founder and chief clinical officer at reSTART. “You’re going to really save these people some tremendous heartache if you can intervene early.”

The heartache manifests itself most commonly at reSTART, explains Cash, in reasonably well-educated adults whose addictions have spiralled out of control in college.

It’s very healing to be with a group of people you feel comfortable with and just having  fun, being childlike and re-exploring what makes people happy

“By the time they come to us, they’ve withdrawn from college, typically. They are depressed, socially anxious and withdrawn — it’s not unusual for them to have suicidal thinking, and they don’t know how to help themselves. Family relationships have deteriorated, and their social life is carried on entirely online in games. They don’t have a clue how to build and maintain healthy relationships, either friendships or relationships of a romantic and sexual nature.”

In Britain, schools are leading the fightback against the corrosive impact of constant texting and Snapchatting on pupils’ social skills. When teachers at Stroud High School in Gloucestershire announced in July that they would introduce a complete ban on phone use for younger girls during the school day, many welcomed the move. They were now free of the pressure to hold simultaneous face-to-face and online conversations. There are also signs of a broader shift. A narrow focus among parents and educators on the dangers of online sexual exploitation seems to have moved towards a more constructive conversation. Now, the keyword is ‘resilience’: how can children be helped to strike the balance between digital technology’s many benefits and its potential costs?  “Every new development of this kind was surrounded by harbingers of doom saying this is the latest risk to our children,” says Emily Frith, the Education Policy Institute’s director of mental health. “Now, there’s more of a focus on wider issues around wellbeing and resilience.”

Fulton once sought solace in online games such as League of Legends and Defense of  the Ancients 2 but now loses himself in a very different kind of network. He has trained as a wilderness instructor and, today, prefers the intimately interconnected ecosystem of the temperate rainforest near the re-START campus.

He now has a full-time job at reSTART, helping people who are on the residential programmes: after all, he can understand better than most what they’re experiencing. He leads walks out into the woods, teaching groups  how to spot edible plants such as Himalayan blackberry, or identify Western hemlock and Black cottonwood trees.

“It’s very healing to be with a group of people you feel comfortable with and just having  fun, being childlike and re-exploring what makes people happy,” he says. “We play a lot of interactive, social games outside – that’s therapy in and of itself.”

Read 5 ways to build resilience in a digital age here