Previously reserved for towns and cities with fewer than 50,000 people, the Cittaslow organisation’s slow city concept is now attracting interest from the world’s largest metropolises

The industrial city of Wenzhou, China, (population two million) is currently known for its rapid development as an economic hub, but some residents hope it may someday be known as a “slow city”.

Recently, a delegation of Wenzhou citizens visited the Tuscany headquarters of Cittaslow, an organisation credited with starting the slow cities movement. The delegation was concerned about the side effects of a hyper, fast-paced life and wanted to learn more about how living slow might preserve cultural heritage in China. The delegation visited local markets and artisans’ studios, including a shop where the Italian art of handmade shoes is still practiced. The artisans they met emphasised the role Cittaslow has played in preserving the value of crafts, like shoemaking, that are only possible with a great deal of time invested and a strong local economy.

The United Nation projects that nearly 70 percent of the world’s population will live in cities by 2050. And indeed, the industrial and economic hubs of the world may be the last places that evoke ideas about living slow. But with inevitable population growth in urban areas on the horizon, many city governments are trying to make their communities more enjoyable to live in and less destructive to the environment.

The beginning of slow cities

Cittaslow grew out of Slow Food, a local food movement founded in 1986 to counter the rise of fast food in Italy. Thirteen years later, Cittaslow became a way to expand Slow Food concepts.

“The ‘slow’ philosophy is applied to not only what you eat and drink, but to all aspects of life in a town,” said Paolo Saturnini, Cittaslow’s founder.

Saturnini created the organisation when he was mayor of Greve, in Chianti, to push back against globalisation and preserve the unique treasures of Tuscany. He was inspired by interactions he saw in Italian piazzas, like the market the delegation from Wenzhou recently visited. He saw value to what happens when people come together face to face, catch up, relax, and take in their surroundings.

Slow city principles stress the importance of things like eating local, in-season food, shopping at locally owned businesses, and preserving cultural heritage and small-operation craftsmanship. Supporters of the movement also emphasise the value of a life where work is not necessarily prioritised above all else, and the importance of making room for natural environments so residents can experience the rhythm of the seasons. Over the years, Cittaslow has sought to prove every city has a unique personality that can be preserved and a local community that can be strengthened.

Currently there are 192 certified slow cities worldwide. Sonoma, California, was one of the most recent additions to the growing list. To be certified, Cittaslow towns must have fewer than 50,000 people.

But that is beginning to change. Pier Giorgio Oliveti, director of Cittaslow, said he has noticed a huge influx of interest from major metropolitan cities over the last five years. According to Oliveti, the technological infrastructure available in bigger cities, such as broad-reaching public transit, is a boon to those who want to simplify. One of Cittaslow’s core values is utilising today’s technological innovations to recreate the slower lifestyle of the past.

“There is no such thing as a slow city that is not also smart,” said Oliveti. “Infrastructure and technology are essential.”

Living at the third story

Although some city governments are just now catching on to Cittaslow’s ideas, individuals have been implementing slow living principles on their own for quite some time. William Powers, a senior fellow at the World Policy Institute in New York City, recently spent a year living slowly in Manhattan, a practice outlined in his new book, New Slow City. Cittaslow and Slow Food provided the foundational concepts, said Powers, for his experiment.

In order to slow down in Manhattan, Powers and his wife uncluttered their lives by giving away nearly 80 percent of their possessions and moving into a 320-square-foot apartment. He also downsized his work week by working more efficiently. Instead of facing a constant stream of consulting, writing, and public speaking, Powers assessed his income-to-time-invested and then squeezed the most strategic tasks into a two-day work week.

Living slow, says Powers, “starts with each of us creating space to … ask the core questions, like: How do we find balance in a world that is changing more quickly than ever before in history?”

During his year-long experiment, Powers used his liberated time to explore New York. As he strolled downtown, flâneur style, he developed his own slow-city principle: “living at the third story.” Every time he walked down the street he made a conscious effort to observe the sky, trees, and birds above him. He noticed that doing that helped him ignore the often-stressful commotion on the city’s ground level and instead observe the hawks stalking pigeons from the Washington Square Arch or the leaves changing on trees growing from the sidewalk.

Thanks to increased interest from citizens like Powers, the world’s biggest cities are taking steps to implement Cittaslow principles and make it easier for residents to work less, build community, and enjoy nature. 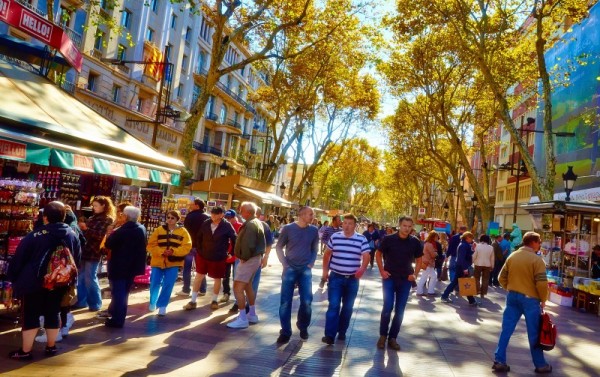 Barcelona’s mayor and the city’s chief architect have both been working with Cittaslow for years, spearheading the organisation’s new project, “Cittaslow Metropolel.” The project, geared toward bringing slow living principles to big cities, has a long list of participating cities including Busan, South Korea; San Francisco, Rome, and Milan. Barcelona’s mayor announced the city’s ambitious goal at the 13th Biennale of Architecture in Venice, saying he wants Barcelona “to be a city of productive neighbourhoods at a human pace, making up a hyperconnected city of zero emissions.”

Inspired by a lecture given by Oliveti on slow living principles, students at the Institute for Advanced Architecture of Catalonia (IAAC) were recently challenged to imagine each neighbourhood in Barcelona as a slow city, with each piece connecting as one giant “smart city.” One idea that emerged from IAAC was to transform typically underutilised urban spaces, like pedestrian bridges, as urban agriculture sites that double as green sanctuaries for citizens. More greenery means cleaner air and fresher food, and aligns with the slow principle of keeping nature within reach. Tokyo, one of the largest cities in the world, is home to its own slow living organisation called Sloth Club. Founded more than 15 years ago, the club’s mission includes minimising “our destructive impact and finding joy in our life without consuming an endless chain of meaningless things.” In admiration of the sloth’s slow style, the club also works to save sloth forest habitat in Ecuador by supporting fair-trade products from the region.

Back in Tokyo, members of Sloth Club follow principles like eating slow, supporting local businesses, upcycling (repurposing something that could have been thrown out), and walking or using public transport. One of the club’s main initiatives is a national campaign calling for residents of Tokyo to turn off electric lights for two hours in the evening during the summer and winter solstices to promote an appreciation of natural light and minimal use of electricity. The “walking school bus,” an original tenet of Cittaslow, is gaining popularity in places like Providence, Rhode Island, and Columbia, Missouri, where thousands of schoolchildren walk to school en masse, guided by an adult volunteer. Last year Molly Rusk wrote an article for YES! Magazine about how the trend benefits student’s health and builds strong community ties. Where: Denver and New York
Population: 649,0000 and 8.5 Million
What: Micro-apartments
Slow Principle: Downsizing

Denver and New York are about to cut ribbons on new micro-apartment complexes, akin to the efficiency apartments that were commonplace decades ago. For people looking to slow down their routine, affordable apartments in downtown Denver and New York City give those who would normally have to commute the ability to walk or bike to their offices.

Residents of these micro-apartments save money, can spend less time working, and minimise their impact on the environment. The units, which tend to average a compact 330 square feet, include a kitchen, bathroom, balcony, and an in-house bike and car-sharing programme.

After spending a year living on the third story in New York City, Powers and his wife have moved to Bolivia and taken the slow habits they learned in one of the world’s biggest cities with them. Beyond cutting expenses and reducing the amount of hours he had to work, Powers designed his routine so he interacts with the people who live and work in his neighbourhood.

Instead of rushing past people every day, he now stops to engage with his neighbours. Of all slow city principles this is perhaps the most important one: reconnecting with your surroundings.

Powers talks about the day’s catch with the fishmonger at the restaurant below his apartment. He has become a regular fan of the jazz group that plays in the park near his house. And he has learned the names of the pigeons from the man who feeds them every day.