Asia Pulp and Paper Group, one of the largest paper mills in the world, is closing its plantations in a bid to protect rainforest and peatlands. Could this unusual move set a new precedent in the paper business?

In a notable shift away from business-as-usual in Indonesia’s plantation sector, forestry giant Asia Pulp & Paper Group (APP) will undertake ecosystem restoration in 7,000 hectares of commercial timber plantations, converting acacia back to native peatland species as part of a broader peatland management programme.

The move, announced at a press conference in Jakarta in August, represents the next step in APP’s efforts to reform its forest management practices, which were long a target of criticism by environmental groups. More importantly, the initiative could have far broader implications in Indonesia by establishing best practices for peat management and pressuring the government and other private sector players to curb ongoing destruction of peatlands across Sumatra, Borneo and New Guinea.

Deforestation and degradation of peatlands are a major source of greenhouse gas emissions in Indonesia and a key driver of the choking ‘haze’ that periodically blankets south-east Asia. Drainage to peatlands is also causing large areas of coastal land in Sumatra to sink or subside, increasing the risk of flooding.

The new initiative is called the Peatland Best Practice Management Programme, which falls under the Forest Conservation Policy (FCP) APP established in 2013 in response to heated criticism from environmentalists. The programme involves a phased approach, the first elements of which are being led by Deltares, a Dutch consultancy with expertise in wetlands-related issues.

The first step involves mapping the vast areas of peatlands in Riau, Jambi, South Sumatra and West Kalimantan where APP has the bulk of its plantations. To do this Deltares used aeroplane-based LIDAR, a remote sensing technology that utilises lasers to construct a highly accurate three-dimensional representation of features including vegetation structure, elevation and water levels in canals to understand the extent and depth of peatlands as well as forest cover. Flying 11,000 kilometres of transects, the effort will produce a comprehensive peat model for 4.5m hectares of land, including APP concessions and surrounding areas.

While the maps won’t be finalised until next year, the initial findings are significant. For example, the survey found that the few remaining major forest areas along the east coast of Sumatra are all on deep peat. And of the five forested peat domes – areas of particularly deep peat – four are in Riau, none of which are formally protected. The fifth is located in Berbak and Sembilang National Parks in Jambi and South Sumatra.

Critically, the LIDAR work showed that APP concessions are present on five forested peat domes, indicating that the company “has a unique opportunity to support peatland forest conservation and emission reduction,” according to Deltares, which recommended that it move to retire plantations in several especially sensitive locations, where peat drainage and degradation is having a substantial impact on forested domes.

APP is taking those recommendations to heart, announcing today that it will move to retire plantations in five areas, including one area in Kerumutan, Riau and four areas in the Berbak-Sembilang landscape in Jambi and South Sumatra.

“APP’s decision to retire these areas of commercial plantation is an important milestone in the delivery of our forest conservation policy and we believe it is an unprecedented commitment,” said Aida Greenbury, managing director of sustainability, in a statement. “The retirement of active plantations is not an easy decision for any business to take, but we believe that taking urgent steps to protect remaining areas of peatland forest, as well as reducing and avoiding climate emissions from peatlands, must be a priority. While there is still a long way to go, and we have much to learn, this announcement today represents a major breakthrough.” 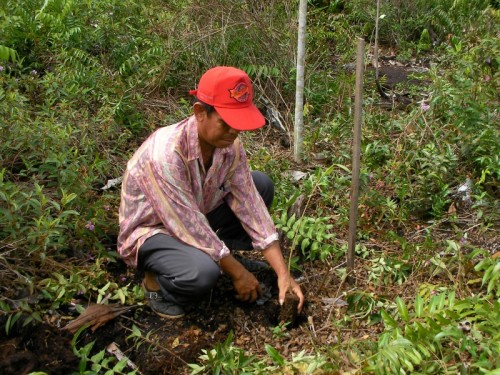 But it may not be as easy as simply blocking drainage canals and letting water levels rise and forest recover. For one, APP will first have to conduct a Free and Prior Informed Consent (FPIC) process with local communities to ensure their wishes are respected. Greenbury noted that some communities might oppose APP blocking canals that are used for transport and access.

Secondly, some of the areas are highly degraded, meaning that dams will need to be carefully planned and the restoration process potentially facilitated by active replanting. APP says the effort is intended to be a pilot so lessons can be drawn on what approaches work best under given circumstances. In some areas APP will use enrichment planting with native swamp trees, while in others it will let nature take its course without intervention other than felling the acacia trees.

That work could eventually inform other projects that aim to rehabilitate peatlands. More broadly, the mapping component of the programme could help the Indonesian government and other companies identify peatlands that should be restored or put off-limits to development.

The timing of such information is critical: the Indonesian government is currently weighing a measure that would weaken peatlands protection, while a number of plantation companies – ranging from palm oil giant Wilmar to APP’s biggest competitor APRIL – are making commitments to better manage, and avoid conversion of, peatlands.

“This project is very important for Indonesia,” said Bustar Maitar, global head of Greenpeace International’s Indonesia Forest Campaign. “Peatland is one of the biggest opportunities we have to address climate change but so far no one has a good idea to manage peatlands. This will provide a strong view of how to tackle peatlands emissions and how to deal with existing plantations on peatland – both timber and palm oil plantations.”