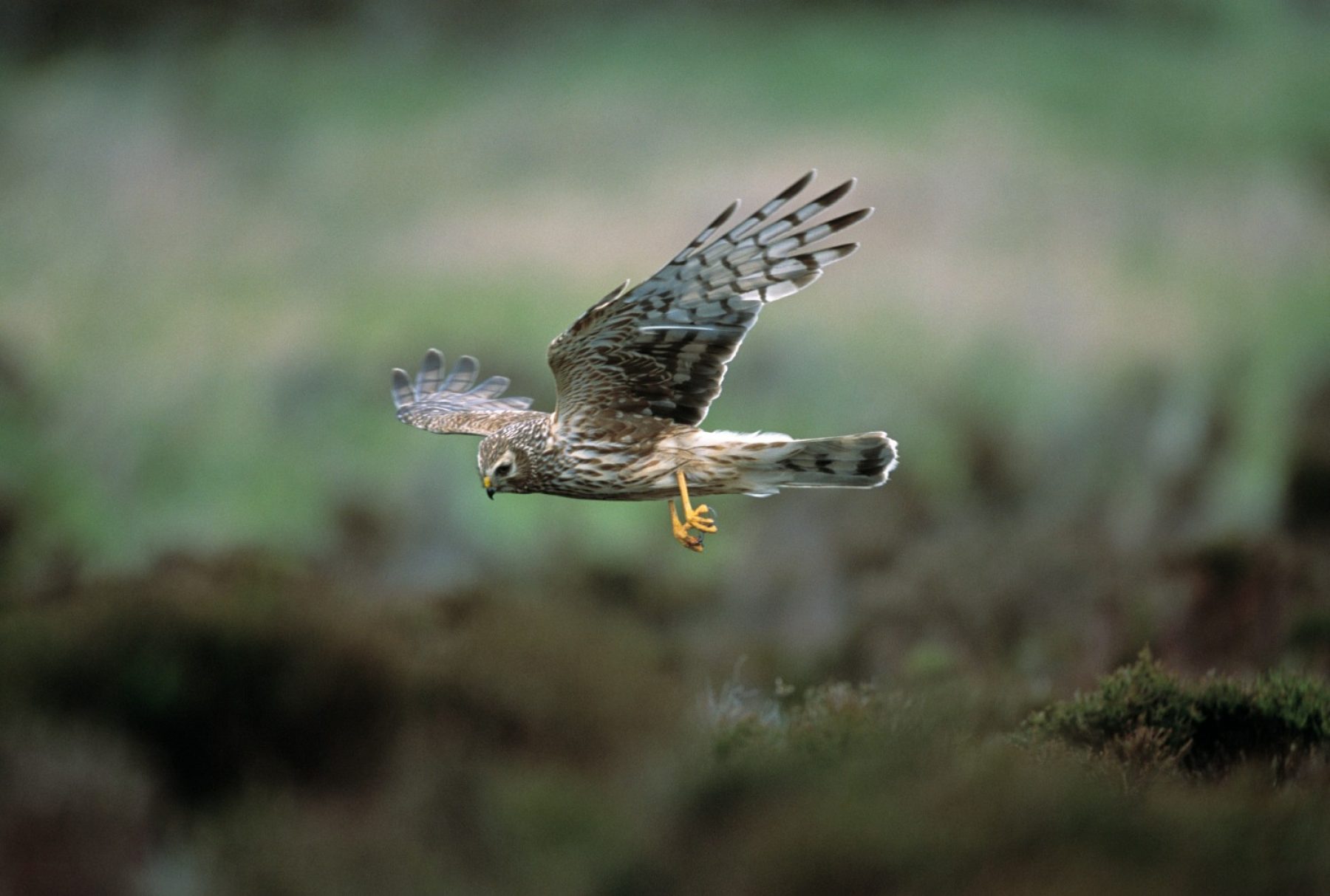 Environmental blogger and campaigner Findlay Wilde, 15, was shocked to hear about the illegal killing of hen harriers, one of the UK’s most vulnerable birds of prey. He teamed up with Ecotricity to try to save the species from the brink of extinction

Words by
Lucy Purdy January 17, 2018
Conservation Environment
Positive News partners
This article has been created by Positive News and supported by Ecotricity

Environmental blogger and campaigner Findlay Wilde, 15, was shocked to hear about the illegal killing of hen harriers, one of the UK’s most vulnerable birds of prey. He teamed up with Ecotricity to try to save the species from the brink of extinction

Dodging rain and mud at Womad festival in 2015, Findlay Wilde spotted his chance. As one of the speakers in the Young Green Briton Chat, the then 13-year-old had just come off stage when he seized the opportunity to pitch an idea to Ecotricity founder Dale Vince. Could the green energy company, which hosts the slot at the festival, help fund a hen harrier tagging programme, Wilde asked?

Clad in waterproofs against the Wiltshire summer weather, the teen launched into an impassioned account of the plight of hen harriers. He explained how these beautiful birds are being shot, poisoned and trapped by some moorland managers who want to ensure that red grouse, which hen harriers occasionally eat, are instead available to shoot for sport. Wilde told Vince how the killers often go unprosecuted and how it is having a devastating impact: there are now just three breeding pairs left in England and numbers are declining elsewhere in the UK too.

Impressed by the teen’s infectious passion and dedication to protecting the birds, Vince agreed on the spot to fund the tagging of a chick.

“Findlay’s optimism and ambition were striking and that’s something that young people bring – they can see that the world needs to change and it’s our job to give them the encouragement and opportunity to make that happen,” said Max Boon from Ecotricity.

With the help of an RSPB team, Ecotricity funded the satellite tagging of a hen harrier chick – named Finn after Findlay, despite the bird being female. Finn was tagged on Forestry Commission land in Northumberland in the summer of 2016 and has since been monitored and protected by the Northumberland Hen Harrier Partnership. Tagging is particularly useful for hen harriers because the birds travel so widely – they need protecting wherever they go. The RSPB’s Life team combines tagging with nest protection, investigations projects and working with volunteer raptor field workers, landowners and residents to protect hen harriers across northern England and southern and eastern England.

Findlay was one of that year’s finalists in the Young Green Briton: a competition by Ecotricity for young people aged 11-16. Entrants must write, video or record their ideas about how Britain could be greener. “All of our Young Green Britons have real enthusiasm for environmental issues, but Finn stood out with his passion for hen harrier conservation,” says Boon. “He approached Dale with a deliverable idea that fitted with our principles and so we were only too happy to support him. It’s fantastic to be a part of the project and support the conservation of such an important species.”

Wilde, who lives in Cheshire, has felt passionate about hen harriers since he first saw one near his grandmother’s house in Wales. “I was immediately captivated by them,” he tells Positive News. “When I heard about their persecution I thought, how on earth would anyone want to hurt them? Tagging means that it’s possible to know where a hen harrier is all the time. In the past, tags have suddenly ‘disappeared’ over grouse moors and there has been no further sign of a harrier which is very suspicious. The tags are expensive and really difficult to come by, so the funding has been amazing. It gives us loads of data. Our bird, Finn, fledged in August 2016 and I’ve been constantly in touch with the people monitoring her. It’s been amazing.”

The team had some great news in August 2017: Finn herself had had a chick, and the bird fledged successfully: a pretty rare achievement for a one-year-old hen harrier. Finn is now raising her chick in south-west Scotland.

And though the situation for the hen harriers in the UK remains dire, there was encouraging news from Northumberland in August last year. Five pairs of hen harriers attempted to nest there last year and three were successful, fledging 10 young. Last spring, local campaigners noticed an increase in activity too with more birds performing their spectacular courtship displays known as ‘sky dancing’.

Findlay’s dedication to the cause has proved infectious to other people too. He raises awareness through social media and his last campaign, a ‘thunderclap’ raising awareness about the Inglorious 12th, (the so-called Glorious 12th of August sees the start of grouse shooting season in the uplands), reached more than 11 million people. Through his impressive social media and blog following, he helped attract more than 100,000 signatures to a petition that called for a ban on driven grouse shooting. Despite it being debated in parliament in October 2016, the sport was not banned. A hen harrier chick being tagged by the RSPB. Image: Mark Thomas (rspb-images.com)

The same year, there were 81 confirmed incidents of British bird of prey persecution but, for the first time in decades, there were no prosecutions for the crimes. In Scotland, the RSPB even got hold of video evidence of a hen harrier in a nest being shot. But the footage was deemed inadmissible by prosecutors. Why? A technicality that people have the right to roam on private land but not to “investigate crime”.

We need more prosecutions: more evidence to engage people because once they know what’s going on, they really care

“Going forward, we need to keep on engaging people who are currently oblivious to what’s happening,” says Wilde, frustrated but undeterred.

“We need more prosecutions: more evidence to engage people because once they know what’s going on, they really care. I volunteer at Parkgate Marsh [a nature reserve on a saltmarsh in Cheshire] where hen harriers spend their winters after breeding and once they see them, people feel really angry about what’s happening to these incredible birds.”

Agreeing to help tag a hen harrier chick doesn’t seem immediately obviously linked to green energy. How does the project with Findlay and the RSPB resonate with the vision at Ecotricity?

“Ecotricity launched as the world’s first green energy company over 20 years ago, as it is the biggest single source of carbon emissions in Britain,” says Boon.

“But it’s not the only one of course, and since then we’ve branched out and aim to target the big three – energy, transport and food, all while making room for nature. Reducing our carbon emissions helps to preserve and protect our natural world and that’s what we’re doing through our work with Finn and the RSPB. “Nature runs throughout everything we do, whether that’s with our wildflower meadow at our football club Forest Green Rovers, by giving land back to nature through our mobile phone network Ecotalk or by creating wildlife habitats in our wind and sun parks. Before building any new green energy generation we’ll work with local and national conservation groups to minimise any environmental impact and ensure that all of our sites are good neighbours to wildlife.”

Most recently, Wilde took his campaign to 10 Downing Street after being invited to visit by Sir John Randall, a special adviser on the environment, along with the group of other young environmentalists. The teen is also working hard to move the natural world higher up the political agenda. He’s promoting the new project on social media using the hashtag #Think500YearsAhead, a timely reminder of the bigger picture in an age of short term-politics.

Because time is not on our side. As Wilde reminds: “We all have a responsibility to protect our wonderful wildlife and the hen harrier is one of our most vulnerable. The way I see it? That we should do all we can to make a difference – before it’s too late.”