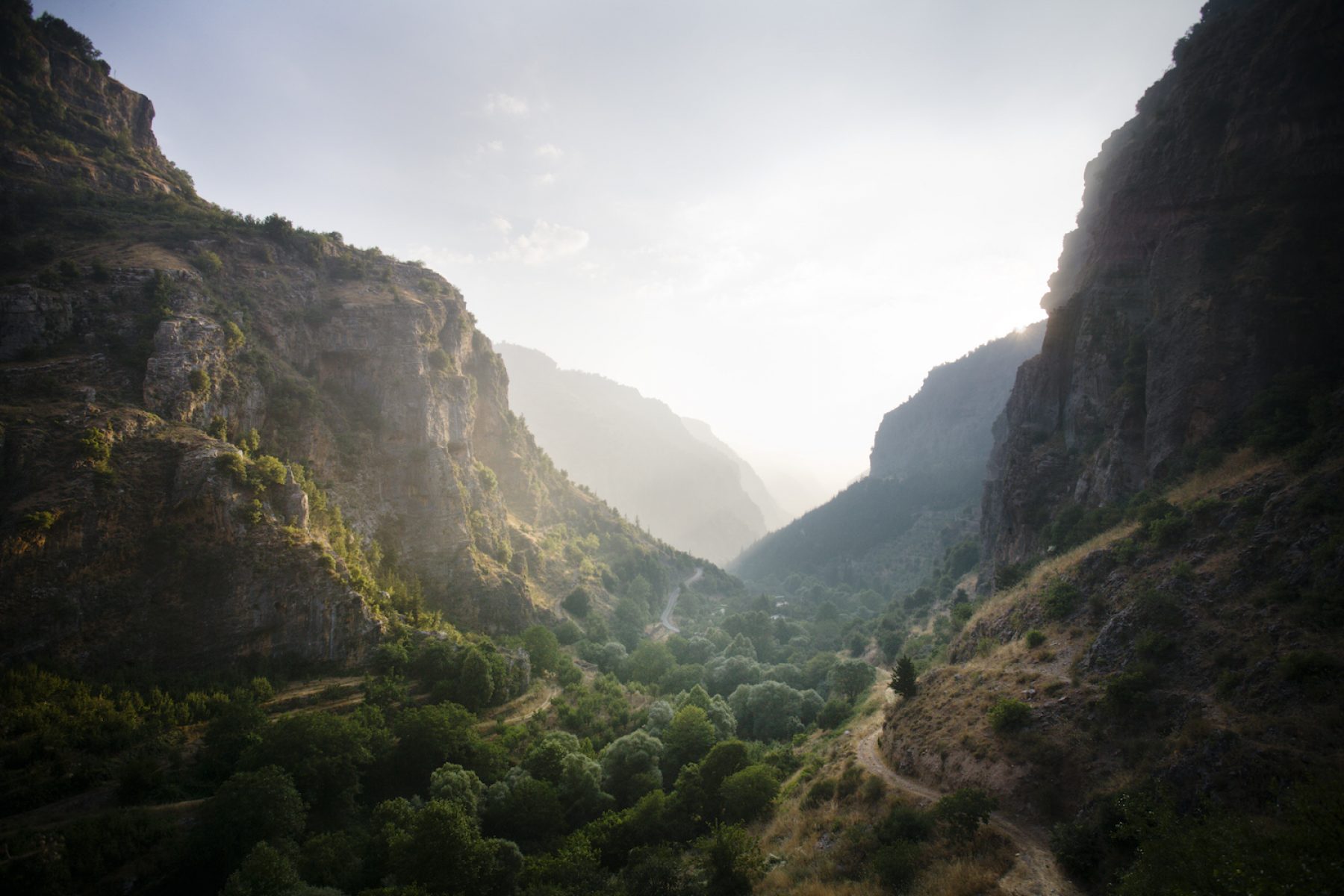 Lebanon: beauty on the border with war

Conflict, debt and dysfunction often cloud progress in Lebanon, which shares a border with Syria. But as Martin Wright discovers, this is only part of the story

Conflict, debt and dysfunction often cloud progress in Lebanon, which shares a border with Syria. But as Martin Wright discovers, this is only part of the story

Lebanon is a small sliver of a country, barely 50 miles at its widest point, sandwiched between Syria and the sea. In calmer times, you could leave Beirut after a leisurely breakfast, and drive over the hills to Damascus in time for an early lunch.

The cradle of several ancient civilisations, including the Phoenicians, it’s been through the wars, literally and metaphorically, for much of the last 50 years. Its own brutal civil conflict flared sporadically through the 70s, 80s and 90s, bringing the economy to a bloody standstill. Then, as peace finally seemed to have taken root, fighting erupted in Syria, occasionally spilling across the border itself. Despite the turmoil, the Lebanese stepped up to take in a million Syrian refugees. Given the fact that its own population is barely six times that, this would be the proportionate equivalent of the UK accepting a cool 12 million people.

The influx hasn’t always been welcomed by people struggling to get by themselves in an economy beset by deep-seated corruption and a sclerotic political system. But their own all-too-recent memory of the ferocity of war has also stirred compassion for their neighbours. While many young Lebanese have sought out opportunities in Europe or the US, others are staying and getting stuck in, like one of the winners of last year’s Hult Prize, a competition for international innovation around social challenges. Heatechs is a startup that was formed by engineering students from Beirut’s Rafik Hariri University.

Adam Choufi, one of Heatechs’ founders, said they were moved by reports of refugees, including children, dying from stove fires left burning overnight. They had been lit in the cramped camp huts in an effort to keep warm through the bitter winter. So the students used their expertise in phase-change materials to design a simple mattress warmer. Placed on a stand near the stove in the evening, it absorbs enough heat in an hour to keep a mattress warm through the night – sparing refugee families from both the bone-chilling cold and the risk of fires.

It’s just one example of the sort of determination and ingenuity that crop up repeatedly across this ancient land – but which typically go unreported by a media fixated only on the region’s endless conflicts.

Above Lebanon’s Beqaa Valley rise the Shouf Mountains, and in among them stand the legendary cedar trees – the country’s national symbol. Like the wines of the Beqaa, the cedars of Lebanon have an ancient history. They are described as the realm of the gods in the Epic of Gilgamesh, the 4,000-year-old poem generally regarded as the world’s earliest surviving literary work.

The cedars, too, became casualties of war, cut for firewood, cleared or neglected amid the anarchy of conflict, their hilltop habitat used as a convenient launch platform by rival militias targeting their artillery on Beirut below. Now they are at the heart of the Shouf Biosphere Reserve, and the focus of a careful regeneration programme run by local experts. It is not only safeguarding the cedars, but also bringing new opportunities to people in the surrounding villages.

Cedars of Lebanon became casualties of war. Now, they are the focus of a careful regeneration programme

The reserve’s manager, Nizar Hani, talks Positive News through an array of initiatives, ranging from ecological corridors and nature trails to the production of briquettes: a more sustainable source of fuel for village fireplaces on chill mountain nights. Goats and ibex are being used to create natural firebreaks through their hillslope grazing.

Villagers are encouraged to open their homes to eco-tourists via homestays and pop-up ‘restaurants’ (essentially a simple but delicious – and often absolutely enormous – meal in a local village house). Local farmers are helped to revive ancient terracing techniques that conserve water and soil – an ever more pressing need in these days when climate change means increasingly violent rainstorms – and to produce honey, olives, jams and other products, many of them organic, which can thrive as a result. 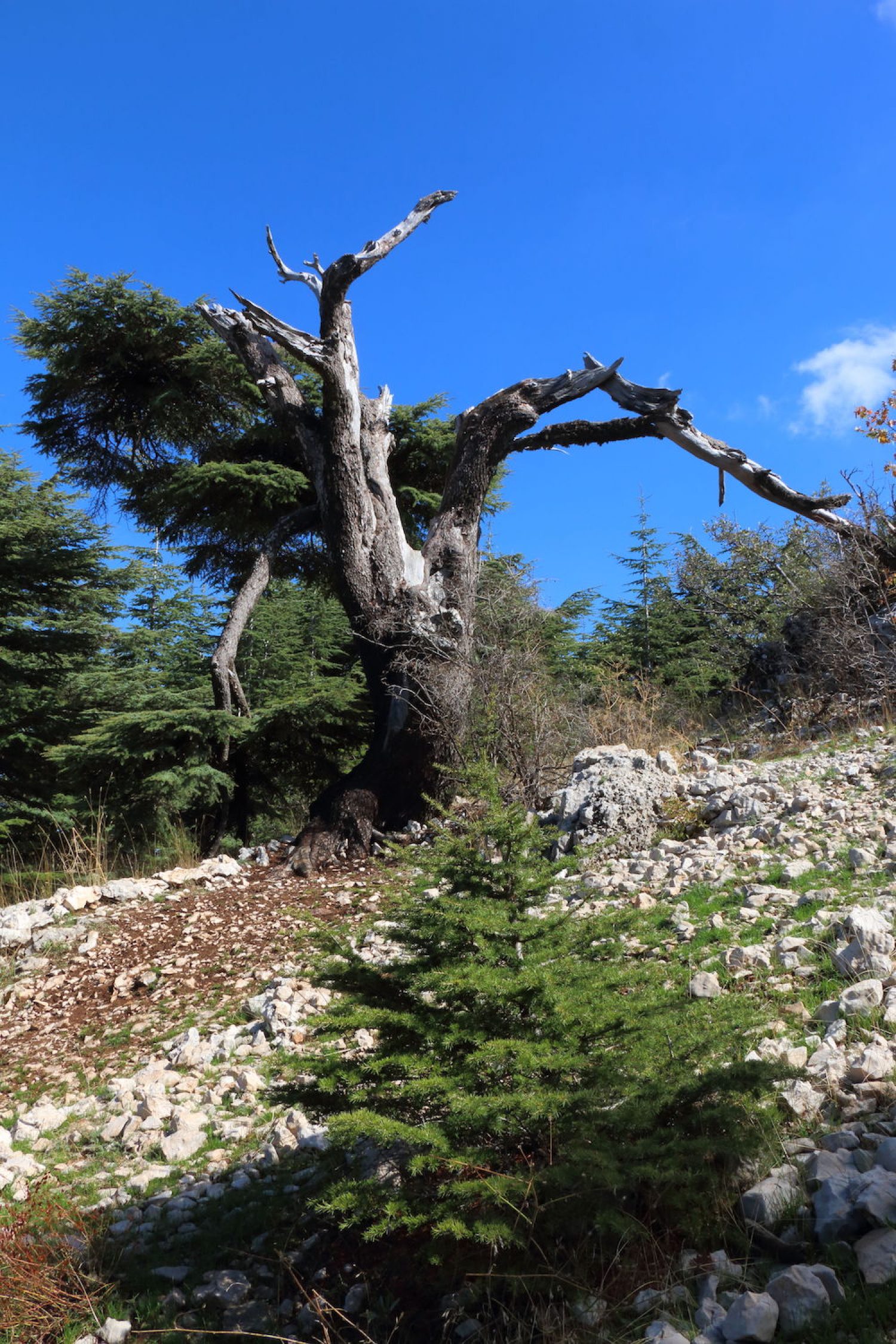 An ancient cedar tree in the Barouk Forest, with younger cedars growing nearby. Image: Martin Wright

Elsewhere in the Shouf, a remarkable trio of brothers, the Assafs, sculptors and gardeners, have also adopted terracing to create a mini-ecological haven on a hillside with distant views of the sea.

As children, the Assafs lost their home in a bombing raid. Now, as Mansour Assaf explains, they aim “to persuade the Lebanese to rediscover our traditional architecture. Cement and concrete have destroyed our ability to build.”

The Assafs’ own house, which is made of local sandstone and lime mortar, with natural insulation and a grass roof, is living proof that tradition can trump modernity when it comes to both comfort and cost. It is warm in winter, cool in summer, and beautiful all year round.

Beyond organic in the Beqaa Valley

Picture this: a lazy sweep of vines under a soft afternoon sun, sloping away across a valley beyond a wildflower meadow. There’s nothing here to suggest you’re on the edge of a war zone. Yet those hills a few miles to the east are in Syria, “and when the shelling starts, the noise makes the windows vibrate – even the wine vats, a little. I don’t think it interfered with the taste though!”

So says Fabrice Guiberteau, the winemaker at Chateau Kefraya, a vineyard in the heart of the Beqaa Valley that is both a lesson in the finest organic-style winemaking techniques, which have won Kefraya’s vintages a cascade of prizes, and a study in persistence against the odds.

Wine has been cultivated in this region since the days of the Phoenicians, and Kefraya was founded in 1951 by the late Michel de Bustros. Astonishingly, he contrived to continue winemaking right through the civil war – even with Syrian or Israeli-backed militias camped all around. 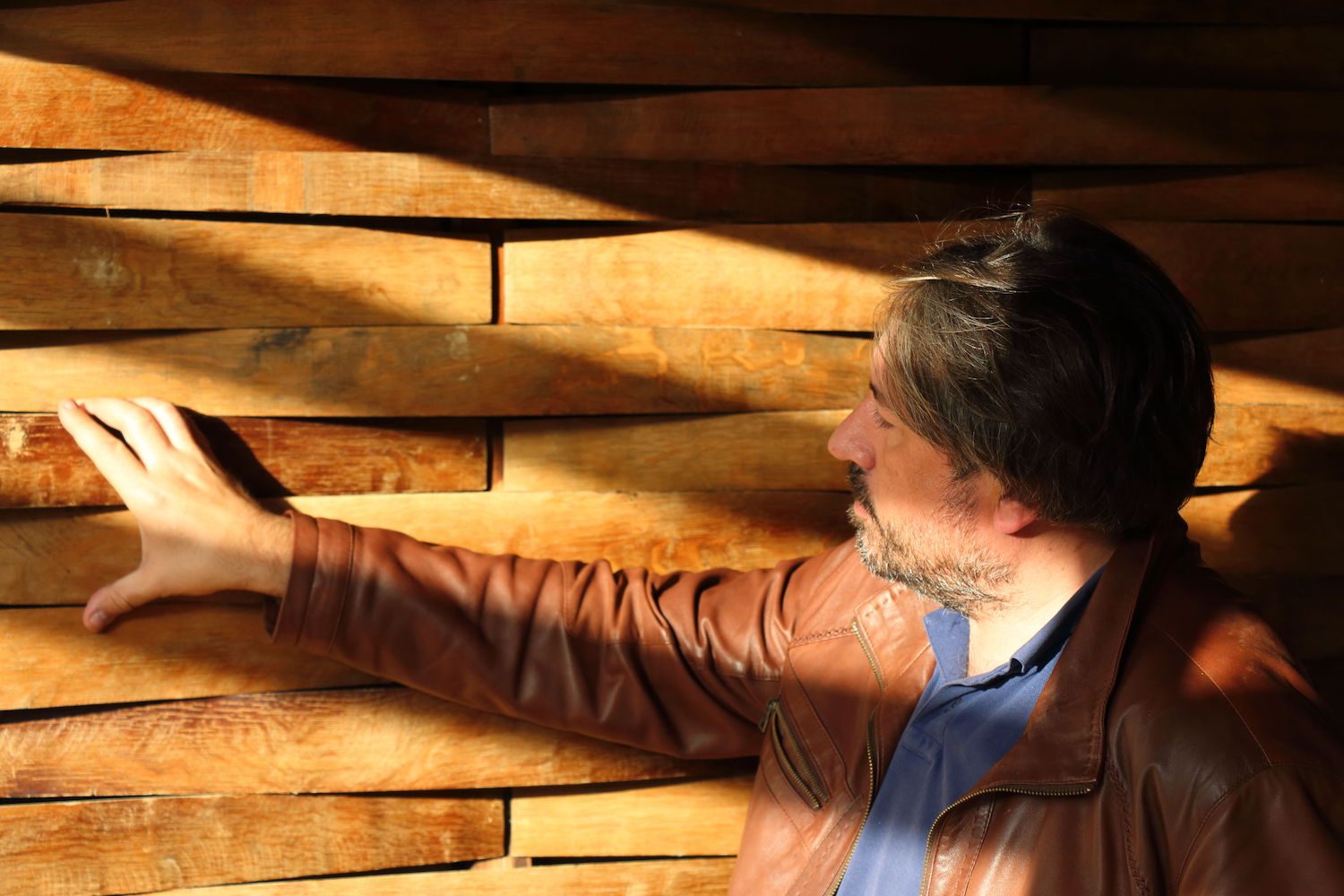 Today, under Guiberteau’s guiding hand, it is pioneering “better than organic” practices, with a mixture of traditional and super-modern techniques. Drones are used to map the precise contours of the vineyard, while last year’s vines are used as compost. Its roof hosts Lebanon’s largest solar array, which saves 60 per cent on the cost of diesel for the generator. “Better for the environment, better for the wallet,” says Guiberteau laconically.

He is particularly proud of avoiding all herbicides, notably copper sulphate, even though that is permitted (and widely used) under organic standards.

And down in the cellars, some of the wine is being matured in vast, elegant clay jars – a technique first used by the Phoenicians, way back in Lebanon’s past.

Working with, not against, the forest

To the north of Beirut, stretching over hills above the ancient port of Byblos, lies a gorgeous tangle of oak and juniper forest on the slopes of Jabal Moussa – ‘Mountain of Moses’. Home to Phoenician, Roman and Ottoman remains, it is a rare example of a Mediterranean forest ecosystem that has all but vanished from the region under pressure of development.

It too is under pressure – from illegal hunting, grazing and quarrying. Now a determined group of volunteers, led by Pierre Doumet, are starting to turn the tide. They established a local NGO, the Association for the Protection of Jabal Moussa, which succeeded in having the forest declared a UN Biosphere Reserve, and are now enthusiastically engaging the seven villages within the reserve to see it as a valuable resource to be conserved, rather than one to be exploited. That’s not an easy ask of people accustomed to taking what they want from their surroundings, but they are slowly making progress, adopting similar techniques to those under way in the Shouf Mountains – albeit with a fraction of the resources. 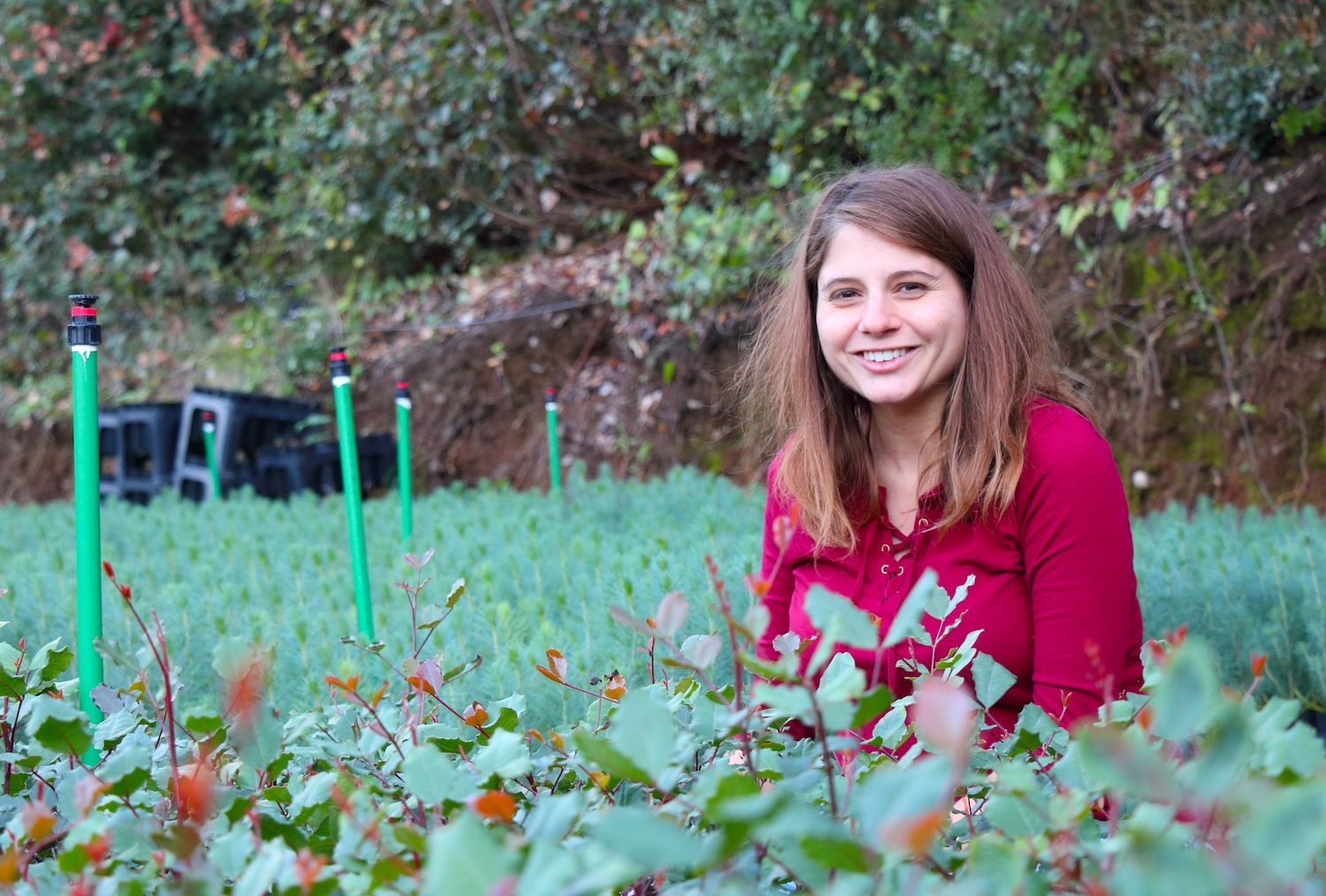 They support local women in producing everything from honey to handicrafts, “often allowing them to earn their own income for the first time”, explains the association’s conservation manager, Joelle Barakat. They run tree nurseries to provide both seedlings for forest restoration, and an economically valuable species for local farmers, and they encourage homestays and home lunches for visitors.

And they have laid out hiking trails, to encourage Beirutis in search of fresh air and exercise to discover the forest jewel on their doorstep. Some 28,000 did so last year alone. “The more people who come and fall in love with the place, the more support there will be to keep it intact,” says Doumet.