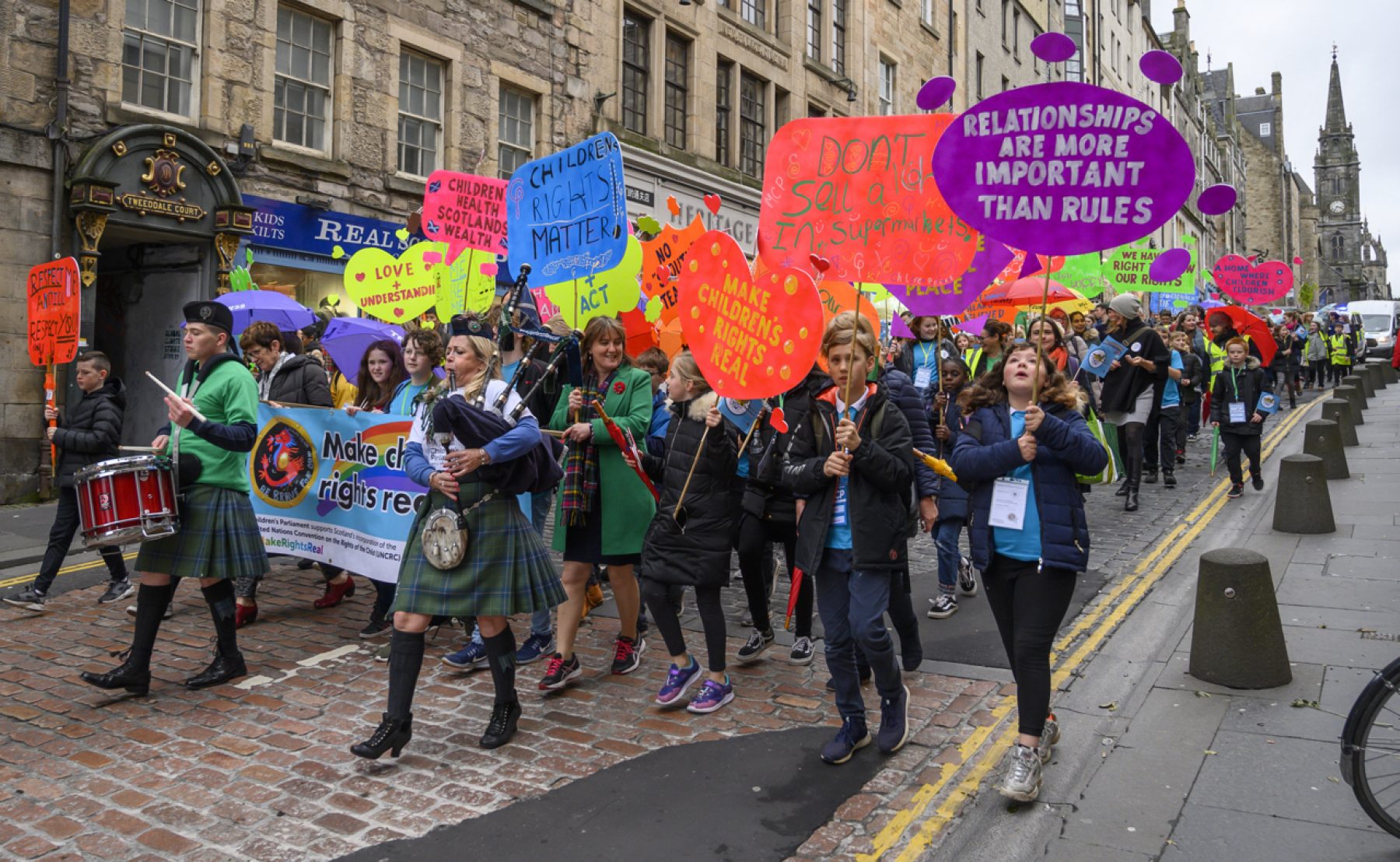 Children march for their rights in Scotland

On a chilly November morning, children from across Scotland travelled to Edinburgh to take over the Scottish Parliament and talk to ministers – or as 11-year-old Rory put it: “We just kind of snatched MSPs and said ‘listen to us!’.”

The friendly takeover was timed to mark the 30th anniversary of the United Nations Convention on the Rights of the Child (UNCRC), which acknowledges that every child has the right to life, the right to their own identity, and the right to express opinions and have them heard.

The UNCRC remains the most widely ratified human rights treaty, but millions of children are still waiting for its promises to be fulfilled, including many in Scotland. First Minister Nicola Sturgeon has pledged to enshrine the UNCRC in law by 2021, which would make Scotland a world leader in children’s rights.

Among those marching to Holyrood were members of the Children’s Parliament, a charity that gives children from all backgrounds the opportunity to share their experiences of growing up in Scotland to influence positive change in their homes, schools and communities.

“The majority of the children we work with in our programmes, projects and consultations are referred by teachers, social workers or youth workers,” said Cathy McCulloch, co-director of the Children’s Parliament. “It’s wonderful to see the penny drop when children realise they are valued and respected.”

Members of the Children’s Parliament are encouraged to examine various social issues through the lens of storytelling and play, and to present their findings to the relevant decision makers.

We just snatched MSPs and said ‘listen to us!’

“We had a project in Edinburgh where children worked with the council to embed children’s rights into local services, looking at what kind of Edinburgh would enable children to grow up happy, healthy and safe,” said Katie Reid, children’s voices project worker.

Haris, 11, was one of the children who took part in the project, which highlighted poverty, smoking near schools and “shouty teachers” as obstacles to children’s rights. “Poverty is a big thing that can stop you going to school and doing the best thing you can do,” he said, adding that he’d like to see smoking bans enforced near schools. “Outside our school there are quite a few smokers.”

Asked what it would mean to have the UNCRC adopted into Scots law, 10-year-old Folake, who is also a member of the Children’s Parliament, said simply: “We are going to have a happier life.”