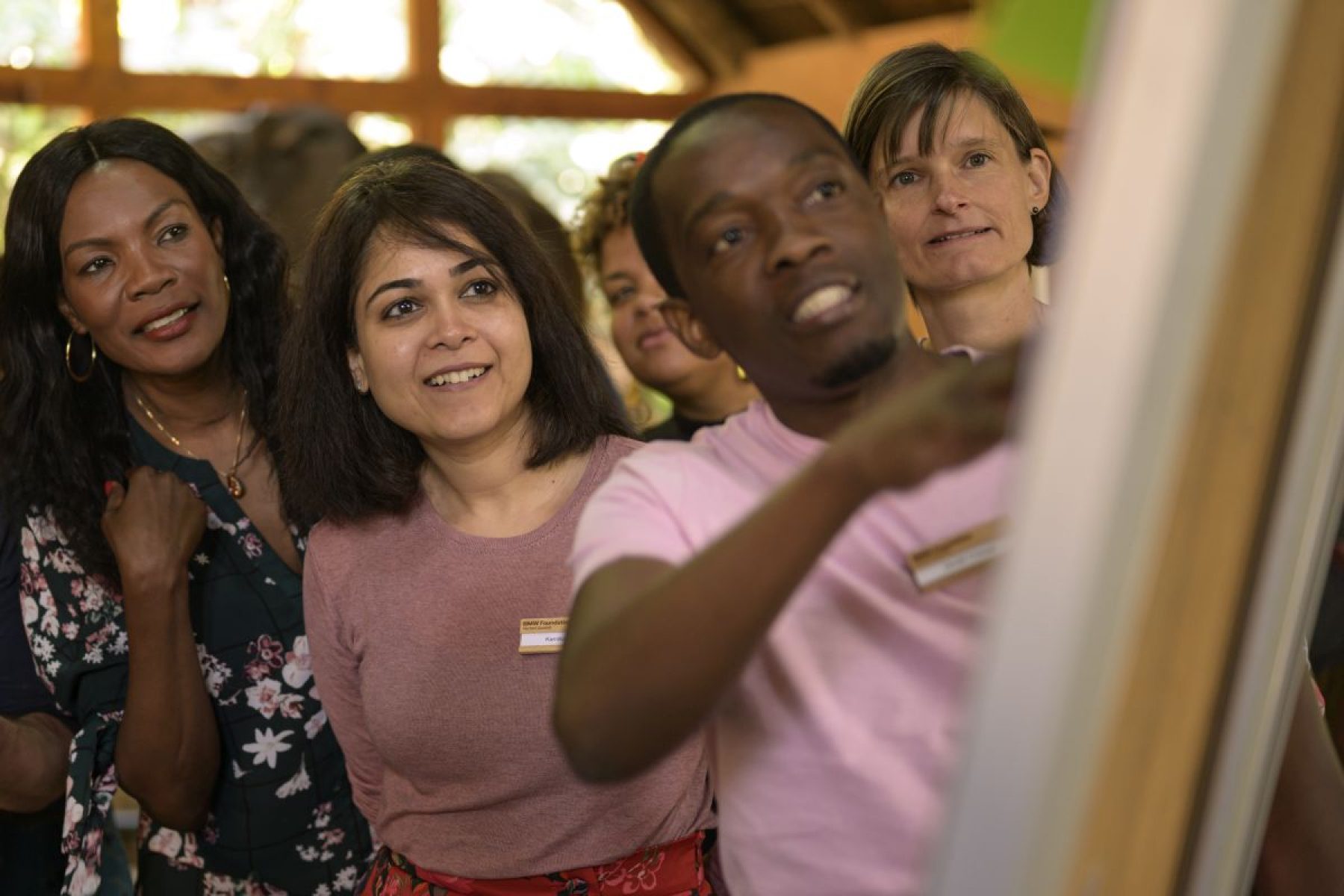 Sustainability goals and serendipity: the recipe for responsible leadership

Think of the word ‘leader’, and what’s the first image that comes to mind? A man standing at a podium making a speech? A captain of a sports team, urging her players to one last push? A chisel-jawed CEO, rallying the troops at an AGM?

Yeah, me too. OK, maybe you were more imaginative. Even so, I bet the mental image wasn’t one of a disparate bunch of thousands of young people, hunched over laptops at their kitchen tables or on their beds, chatting and Slacking away into the night.

Well, maybe it should have been. Because that’s exactly what one of the most remarkable exercises in leadership in response to the Covid catastrophe looks like. Back in March, while most political leaders were still wrestling with how best to respond to the pandemic, a cool 27,000 people, mostly in Germany, combined in the world’s largest ever hackathon.

Under the hashtag #WirVsVirus (Us against the Virus), they pooled ideas and resources at lightning speed to come up with a range of 130 practical solutions – from 3D printed ventilators to emergency food distribution – and won the backing of the German government to take many of them forward. 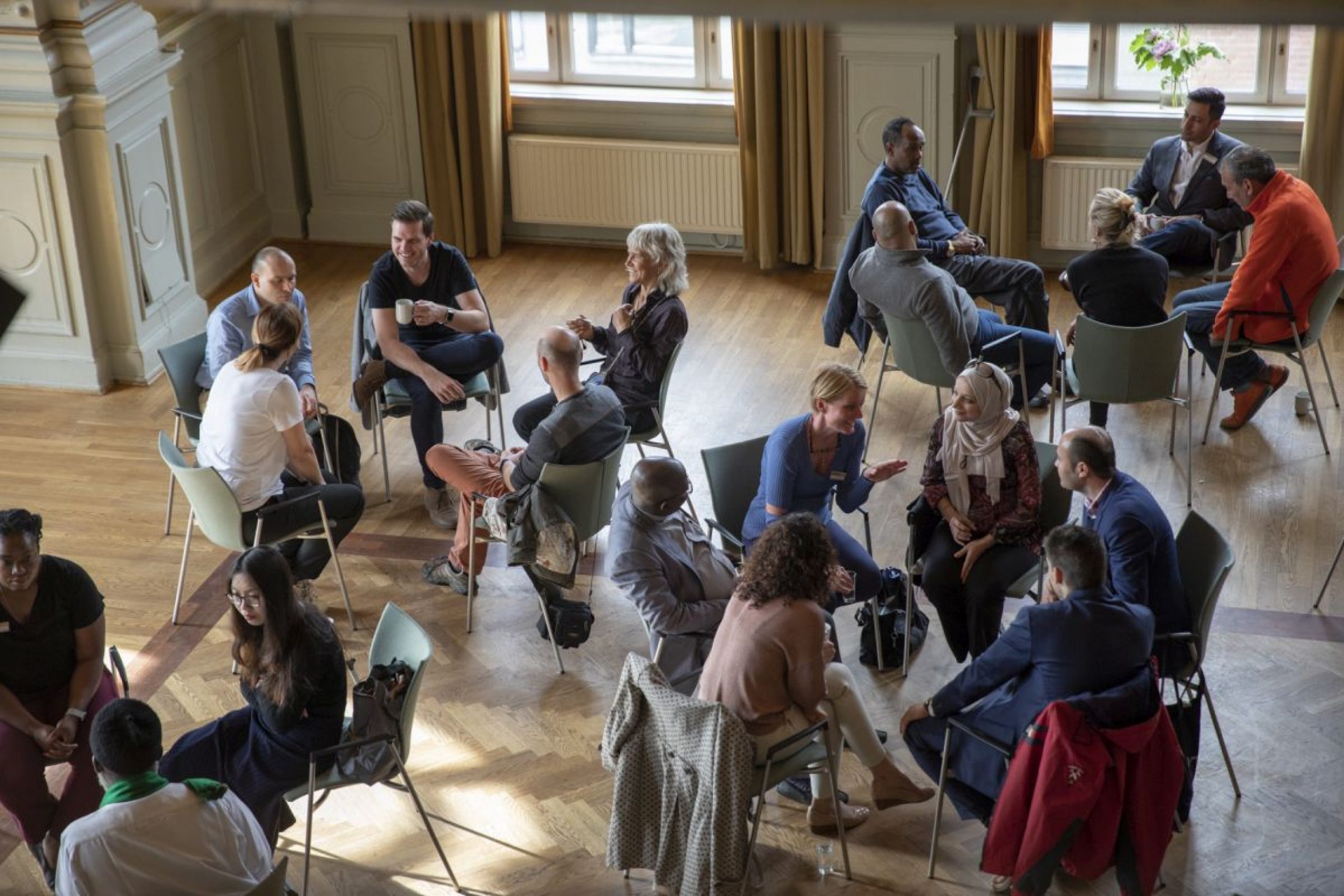 The project was supported by the BMW Foundation and drew much of its inspiration – and some of its prime movers – from the foundation’s Responsible Leaders Network. It exemplifies much of what the network’s about: bringing together smart, dynamic, imaginative people from all kinds of backgrounds – way beyond the ‘usual suspects’ of conventional high achievers – in a “radical diversity”, as board member Markus Hipp puts it. And then letting the sparks fly.

“It’s creating a space for serendipity to happen”, says Hipp. And when you do so, he adds, the results can be extraordinary, as #WirVsVirus showed. Indeed, the initiative so impressed the German government that it’s declared it wants such an approach to be part of its problem solving toolkit from now on.

‘Responsible’ carries with it connotations of care and caution, of one step at a time. But those aren’t necessarily the ideal attributes of a responsible leader in a time of crisis, whether triggered by Covid-19 or the slow rolling menace of climate change.

In the old days, a responsible leader was supposed to be all about “command and control, stiff upper lip, in charge and on top”, says Katie Duckworth, who specialises in coaching leaders of purpose-driven organisations. But such an approach was rarely ideal, and even less so in an age when being responsible means being open to radically new approaches.

When you show that you’re not invulnerable, you actually come across as more authentic

“Really responsible leadership is messy”, she says. “And it has to be. Because if you’re going to create an environment where you can take bold, innovative, creative action, you have to show you’re willing to take risks. And that means acknowledging that you can’t control everything.” And when you do that, she adds, “when you show that you’re not invulnerable, you actually come across as more authentic – and so, ironically, you command greater respect.”

Veteran sustainability guru John Elkington, himself a member of the foundation’s Responsible Leaders Network, talks of the need for leadership that “comes from the edges”. At a time when “everything is breaking loose”, he says, the best leaders won’t necessarily be those “with their MBAs, who’ve gone through a process which has turned them into something that the old system recognised and rewarded – the people who prospered in times when we were all following straight line trajectories and thought we knew what we were doing.”

He points instead to disruptive, inspirational people such as Malala Yousafzai or Greta Thunberg, “who picked up the world by the scruff of its neck”. Responsible? Certainly. Cautious? Not a bit of it.

Markus Hipp agrees: “We can’t expect to solve these new global challenges by operating within the same systems that created them.” Hence the foundation’s backing for initiatives like the League of Intrapreneurs, which champions disruptive thinking from within companies and organisations, or the Impact Hubs, which have evolved from a new type of workplace to a whole new way of working and collaborating (they were, incidentally, also key players in #WirVsVirus). 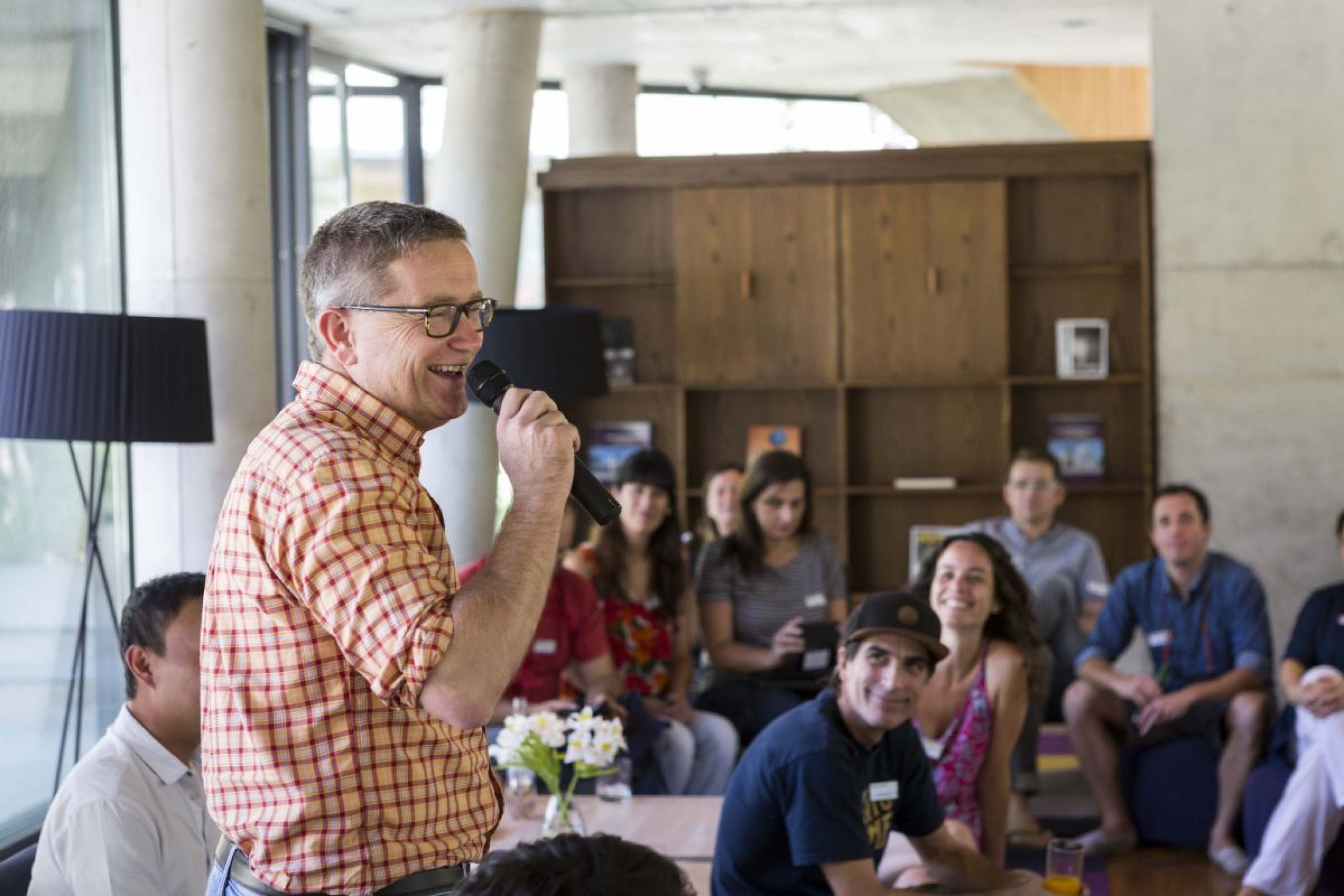 SDGs: A compass for leaders

The hubs use the UN’s Sustainable Development Goals as the “lens to view their impact on the world”, and the SDGs are also at the core of the foundation’s responsible leadership programmes. As Hipp explains, the goals provide a “concrete framework” for responsibility in practice “and we want our leaders to help drive them forward, to provide a real historical momentum for change”.

That’s reflected across the initiatives that the foundation supports, such as Cities Can B – a global movement originating in Latin America, helping cities become more inclusive and sustainable – and a raft of programmes on impact investing and sustainable finance.

Some might raise an eyebrow at all this sustainable experimentation carrying the name of a company which, despite some impressive commitments, still generates much of its revenue from petrol- and diesel-powered vehicles. But Hipp insists that, while strongly backed and funded by the BMW Group, the foundation operates wholly independently. And he adds that the corporate brand’s reputation can help it be taken seriously in both the political and business worlds, opening doors that might remain shut to a conventional NGO. At a time when urgency is everything, that’s a hugely valuable asset.

Sustainability overall, meanwhile, is an area rich in potential for new kinds of leaders, says Elkington. He points to the extraordinary progress made by disruptive entrepreneurs in just one of the SDG target areas: renewable energy. Its rapid rise has confounded experts to the point where the combination of solar and wind power with dramatic improvements in battery storage are poised to “elbow aside” conventional alternatives, and “turn the utility sector inside out”.

This kind of progress, which is highly responsible but rarely cautious, always carries with it the risk of failure. Indeed, a willingness to fail is crucial to its success. Such an attitude is actively celebrated in the gloriously titled Fuckup Nights, another initiative backed by the BMW Foundation. Its operating principle is stark but simple: each month, in events across the globe, three to four people get up in front of a room full of strangers to share their own professional fuckup. “The stories of the business that crash and burn, the partnership deal that goes sour, the product that has to be recalled, we tell them all,” explains their website.

And if that sounds like an exercise in exhibitionist masochism, the reality is very different. As founder Julio Salazar puts it: “The more vulnerable you are, the more powerful you get.” The playful, irreverent approach can take the personal shame out of any given fuckup, explains Hipp, and so help distil the learning from it, “so that second time around, things can go better”. 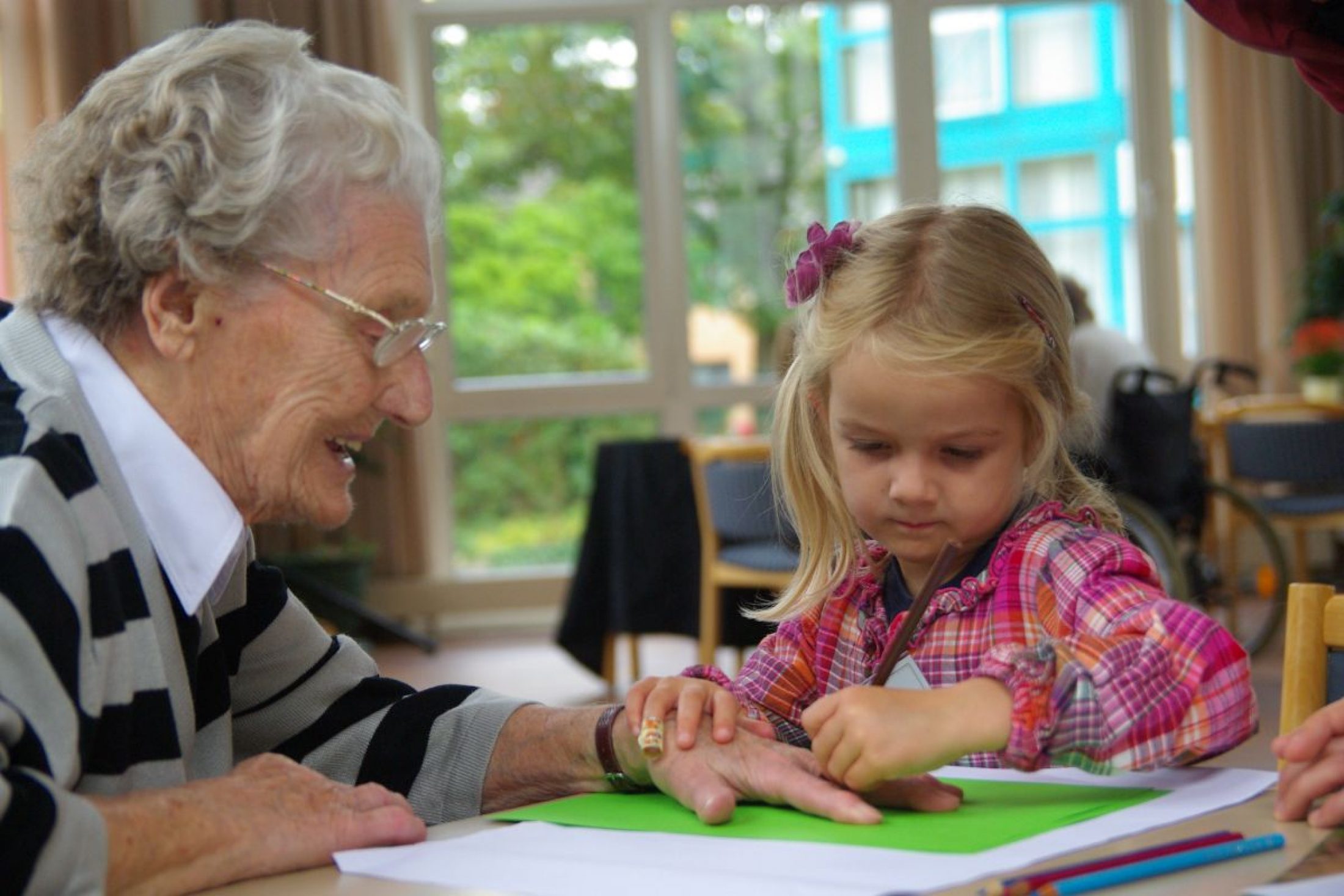 Hands across the age divide – the ‘generation bridge’ in action. Credit: Generationsbrücke

Most of the ideas that surfaced in the hackathon were failures. But the freedom to fail liberated people to be fearlessly creative and that creativity brought about the successes.

It’s a spirit which runs through much of the Responsible Leaders Network. Simply bringing bright sparks together, without any set agenda or task list to work through, sounds like a leap of faith. But it’s one that brings results, says Hipp.

He cites the example of the Generationsbrücke (‘Generation Bridge’), a scheme that brings together elderly people in nursing homes with school-age kids, enriching the lives of both. A simple enough idea, but one never before achieved at such scale, it now covers a large number of homes in Germany alone and has spread across Europe as far as Russia. And all as a result of bringing one man – Horst Krumbach, manager of a nursing home in Aachen – and his inspirational idea in contact with others in the network, whose shared enthusiasms and skills brought it to life.

“When you bring remarkable people from diverse backgrounds together for three or four days, somewhere pleasant, without business cards or to-do lists, they can go away and make something beautiful happen.”

This article is the first in a series looking at responsible leadership in action.