‘It’s the most ecstatic thing, to just be yourself’

Seán Dagan Wood discovers how a new series of innovative workshops run by the award-winning filmmaker, musician and ‘creative catalyst’ Jamie Catto, is inspiring people to realise their potential

For seven minutes, I look deep into the eyes of the person opposite me. Not a word has passed between us. Ever. We are complete strangers. Or, at least we were.

Now, after 420 poignant seconds of unbroken eye contact, I don’t yet know his name or anything about his personality, but a connection has been made and I feel a deep sense of this person. It’s a beautiful, disarming experience.

And that’s how it begins… Jamie’s Catto’s journey into the reality of who we are. I’m in Islington, London, for a transformative weekend workshop, titled What About You?, which aims to help people unleash their personal and professional potential.

A musician and filmmaker, Jamie was a founding member of Faithless – the most successful name in dance music in recent decades, but is perhaps best loved for his landmark music and film project 1 Giant Leap. Exploring “the predicament of being human,” he and Duncan Bridgeman travelled the world recording the finest musicians and interviewing thought-leaders from different cultures, revealing “the unity within the diversity.”

Combining his experience from projects such as 1 Giant Leap with a passion for personal evolution, Jamie began delivering workshops last year in places ranging from Devon to Berlin, Seattle to Thailand.

“I think we’re living in a world where we’ve all agreed a massive compromise through the pursuit of approval,” Jamie tells me. “We get addicted to the ‘crack’ of approval very early on in life. Because of this, we edit ourselves incrementally until we’re these crippled 30% versions of ourselves. On a date or job interview we’re brochure versions of ourselves, tailored perfectly for the part.

“What I want in life is intimacy; for you to show me all of yourself and for me to feel free to show you all of myself”

“What I want in life is intimacy,” he continues, “for you to show me all of yourself and for me to feel free to show you all of myself. The journey from that 30% back to 100% is the point of life to me. It’s where unity lies and it’s where the fun lies.”

Jamie is on a personal mission to liberate us from the burden of hiding our fears, our insecurities, our insanities. The energy wasted in denying our ‘shadows’ is pure gold ready to be harvested for creativity, he believes.

But first, we need to be in the right state for our energy to be put to good use. That’s where the unbroken eye contact and the focused conversations about it afterwards come in, as a ‘full-bodied listening’ exercise.

“Creativity is a listening process,” says Jamie. “When I’m writing a song I listen for it, twiddling around on the guitar. If you relax and receive, let yourself be penetrated by reality – rather than being busy doing and controlling – it’s already there.” 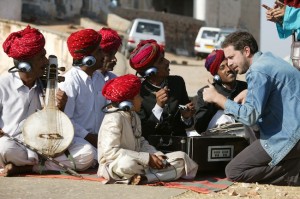 Jamie Catto recording in India for the 1 Giant Leap project

With the group’s social awkwardness eroding rapidly, Jamie introduces a series of games designed to help us identify our inner critics, the masks we wear, and the parts of ourselves we avoid. While also bringing out our strength and unique genius, the games allow us to connect authentically as a group.

Blending discussion, sharing, drama and role play, writing, meditation and visualisation, it’s liberating – and at times moving – to be able to explore my ‘shadow self’ in the company of others as we realise how benignly imperfect we all are. It’s also hilarious – finding myself in a room of 30 people all acting out their ‘demons’: the martyr offering to do anything anyone wants, while the control freak tries to tell everyone where to walk and sit, and the person embodying arrogance barges around interrupting conversations.

Jamie’s explanation for using these games is simple: “It’s the quickest and funniest way. I don’t want to do 20 years of Buddhist meditation, I want to do it quick and I want to do it funny; that’s the criteria I have for my evolution.”

The speed at which he cuts to the chase in getting us to open up could be unnerving for some. Yet the humour and playfulness of his approach – alongside the caring intentions behind it – makes the workshop feel entirely safe. We’re also encouraged by the fact that he sets the example for how to be ourselves in all our absurdity.

“That’s what I want us to do: laugh at what unbelievable divas we are, throw up our hands and go ‘yeah, me too.’”

“I don’t want to be like the guru at the front,” he explains. “I’m part of my own versions of everything we’re working on, I’m part of my own egocentricity especially – and I’m cracking up at myself most of all. That’s what I want us to do: laugh at what unbelievable divas we are, throw up our hands and go ‘yeah, me too.’”

With different flavours of contemporary psychology and spirituality, grounded in practical tasks and mixed with a healthy dose of cynical comedy (the “dash of evil” as he calls it), Jamie’s workshops are unique and accessible. They would probably appeal, in fact, to people who don’t usually like workshops.

Jamie cites the spiritual teacher Ram Dass, author of Be Here Now, as one of his main influences, but distances himself from spiritual terminology: “It’s so unusual for us to just be honest and visible and transparent and unpretentious for each other, that it’s called a spiritual experience. For me it’s just being as normal as can be. It’s actually the most exciting loving hilarious brilliant ecstatic thing in the world to be as visible and plain and as just yourself as you can be. This is what all the best so-called spiritual teachers say: ‘just be yourself.’”

And so, having harvested the energy of our shadows and ignited our geniuses, the second day of the What About You? workshop brings a masterclass in project building. Whether our projects are something creative, work-related, or just an aspect of ourselves, we’re given a trove of principles and tools for bringing our visions to life, drawn from Jamie’s experience designing and directing film and music projects around the world and collaborating with figures ranging from Billy Connelly to Yoko Ono. 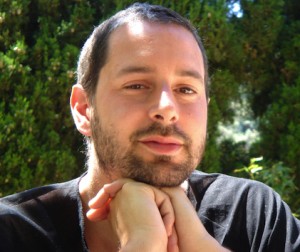 All the practical advice links back to his understanding of how the universe works: that reality is set up to reflect you and is affected by the lens you look through. By being fully present as our “unapologetic, big, whole selves,” he believes, we can interact consciously and intimately with life.

For Jamie, enlightenment is a realisation, not an attainment. “It’s always available and you dip in and out of it depending on your state of being,” he explains. “With discipline, your state of being can be such that you respond to your experiences with the viewpoint of ‘wow, this is a gift’, not ‘everyone is against me.’ That’s a choice, and it takes massive discipline to be a free spirit.

“If everyone does what we do on the workshops,” he concludes, “people would have a much bigger percentage of their lives feeling connected and relaxed, therefore not feeling the alarm of the lie of separation and individuality, therefore not pissing everyone off and being a drama queen. Everything exponentially goes from there to having a much more fun and juicy life.”

Jamie Catto runs workshops throughout the year, across the UK and globally, payable by donation. He is also offering a new free advice service for people’s projects, missions and personal thresholds, called FrEEDBACK, whereby if you email him at freedback@jamiecatto.com asking for specific advice in 99 words or less, he or a member of his team will respond in 99 words or less, usually within 24 hours.