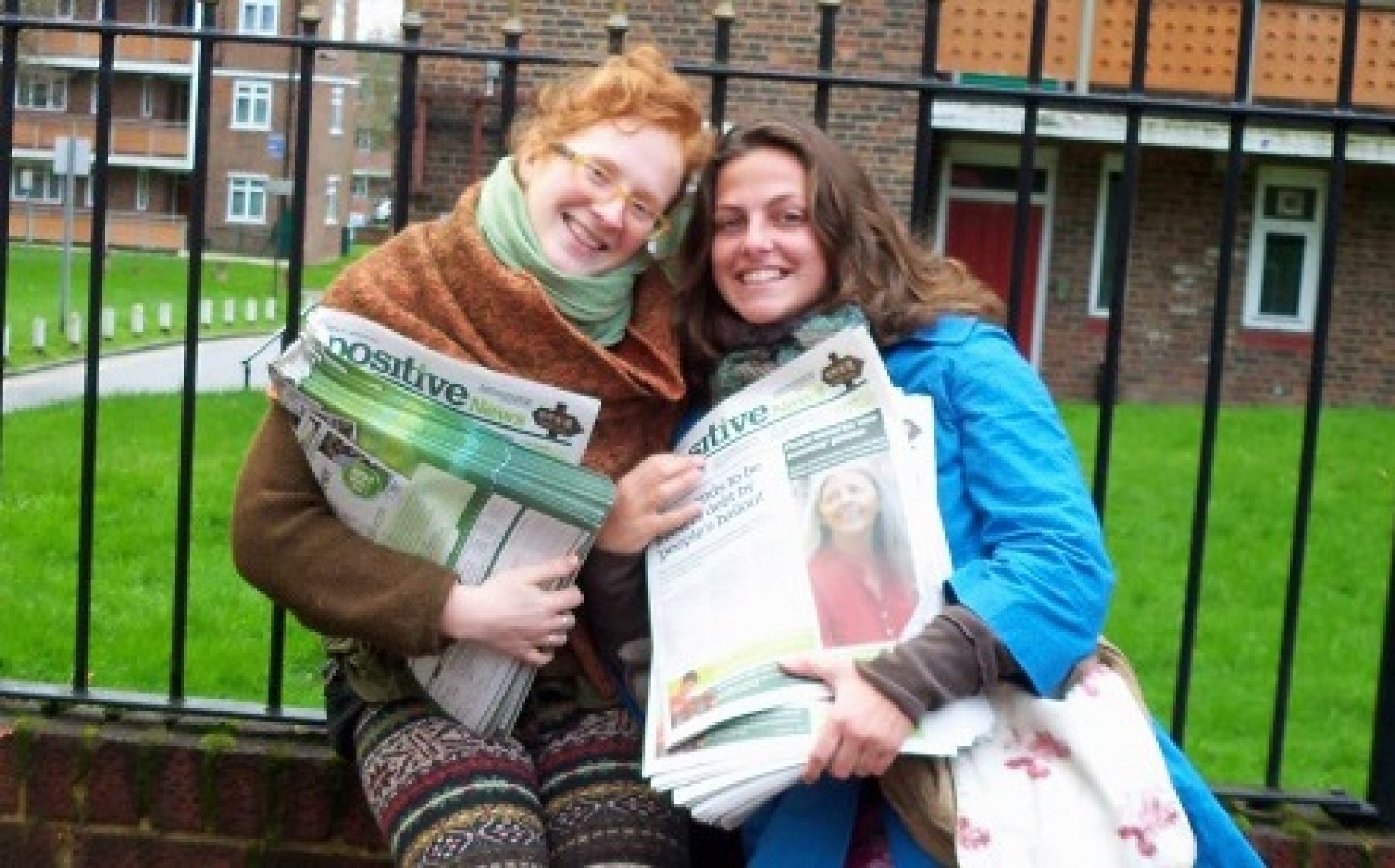 Taking a look back at how it all began and discovering their ambitions for the future, Lucy Purdy talks to the people behind the newspaper that’s redefining the news altogether

When Shauna Crockett-Burrows founded Positive News 20 years ago, in 1993, it was a bold expression of her desire to bring about positive change in the world. Zealously proactive, she knew scores of individuals and groups who were working in all sorts of different ways to improve the world we live in.

At a time before the internet dominated communication, her wish was to connect these inspiring, like-minded people and tell their stories. From a simple newsletter called Link-Up, which Shauna pieced together on her kitchen table, this powerful seed of an idea grew into Positive News – a blueprint for how journalism can inform, inspire and empower people.

The first editions came off the press around the same time that BBC broadcast journalist Martyn Lewis began urging the media to rethink its judgment on what constitutes news and for positive developments and solutions to be given a “fair hearing.”

Two decades on, the publication has adapted with time, undergoing a re-branding, re-design and website re-launch two years ago, and is now run from London and Shropshire, with an expanding network of journalists across the country.

Following Shauna’s death in 2012 at the age of 81, having been appointed as editor the previous year, Seán Dagan Wood then took over the reins as director of the organisation. Joining the paper in 2008, he had worked closely with Shauna to help shape the future of her vision.

“I remember the feeling I had when I first read a copy of Positive News,” says Seán. “It was an electrifying sense of possibility. I realised the sheer volume of people who were doing incredibly inspiring things in the world, and how we could all be a part of that. It was a whole different story about reality, one that I wanted to be part of.”

The paper’s ethos – its driving force – has remained the same since its inception. Seán explains how he sees the role of Positive News: “I firmly believe in the value of investigative, critical journalism that holds power to account and exposes wrongdoing, inequality and the problems we face. But at the same time we should also look at the solutions.

“The world is facing massive crises: the breakdown of our economic system, or climate change, for example. If we draw attention to potential solutions, successes and achievements, we can catalyse the change we need to ensure a better future.

“We also need positive news on a personal level, because we need to believe in ourselves and what we’re capable of. This is what gives me most hope and motivates the work I do: my belief in the human potential.”

Oliver Sylvester-Bradley, head of marketing, adds: “The world needs inspiration, we need positive stories; the stories that cultures tell themselves define who they are.”

A team of around 30 freelance journalists regularly write for Positive News in print and online, while hundreds more have written for Positive News over the years. The newspaper has a circulation of 40,000 copies and is printed quarterly, meaning it does not try to compete with the pressure of the 24-hour news cycle, but plays a different role

“We join the dots between all the undercurrents of positive change in different areas of society and show the bigger, long-range view of how the world is transforming,” says Seán.

“We see journalism as a service to society; that has to be the foundation. For us to run a story, the information needs to be constructive or about something that’s benefiting people or the planet. And of course the writing needs to meet the same journalistic principles that any other respected publication would recognise.”

“I’ve become increasingly proud to say I work for the paper at a time when people are turning away from the mundane, irrelevant news being put out in much of the rest of the media” – Claudia Cahalane, journalist

New writers, many who have grown disillusioned with working in the mainstream press, regularly get in touch to express an interest in getting involved.

“I’ve been really pleased to see Positive News go from a publication on the fringes to something that more and more people see as a snapshot of the genuinely important stories of the day,” says Brighton-based journalist Claudia Cahalane.

“Positive News doesn’t talk blindly about economic growth being a good thing, for example, as most other publications do; it shows the initiatives trying to realign the economy into something more equal and sustainable. Working for Positive News feels ‘right’ for me. I’ve become increasingly proud to say I work for the paper at a time when people are turning away from the mundane, irrelevant news being put out in much of the rest of the media.”

Subeditor Rachel England points out that Positive News goes “way beyond” the typical ‘waterskiing squirrel’ type of good news piece that gets tacked on the end of traditional news reports “in the name of frivolity.”

“It means reporting stories – all kinds of stories – in a fair and balanced way, addressing the issues and problems at hand but also, crucially, giving proper attention to the work that’s being done to counteract them.”

Carol Hudson was just 16 years old when she began working for Positive News in 1996. She is now membership and distribution manager and runs the Shropshire office, overseeing the newspaper’s unique, grassroots reader distribution network.

“When the print copies are delivered here, we have two packers who come in: one is a local girl and the other is my mum!” explains Carol. “We parcel up all the bundles by hand, which takes about three days in total. But it’s all made worthwhile when someone phones up to say that reading the newspaper has brightened their day. It’s so nice to hear those things. I feel passionate about what we have set up here and how far we have come.” Bundles of Positive News at the Shropshire office

Support from readers remains at the heart of the paper’s success. As well as the copies that are sent directly to members – individual subscribers who support Positive News financially – there is also a nationwide network of volunteer distributors who pay a small postage and packaging charge to receive bundles of Positive News. They then take these to local outlets – including shops, cafes, libraries and doctors’ surgeries – where the paper is picked up free of charge by the public.

In this way, Positive News has grown organically, with no third-party distribution necessary: community-supported media at its best.

Distributor Sheri Burt says: “My friend is a keen distributor for Positive News, so I joined her one day and it seems there is nothing better to do on a quiet Saturday afternoon than spread positivity. Just knowing that uplifting good news is being shared is brilliant.”

A movement for positive media

And what of the future? While Martyn Lewis was criticised for speaking out against the media’s imbalance 20 years ago, the concept of positive news is now being more readily accepted. 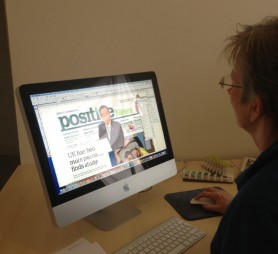 “Increasingly, editors, journalists, radio producers and others are getting in touch to find out about what we’re doing,” says Seán. “And there are now good news websites cropping up on every continent, in all kinds of places where you wouldn’t necessarily expect them: Afghanistan, Pakistan, Africa and America, as well as Europe.

“In France, Reporters d’Espoirs, an NGO, is partnering with national papers and TV stations to publish supplements and bulletins of good news. Or the LA Times, for example, now has a good news twitter feed.

“Today we’re aware of everything ‘going wrong’ like never before – a real oversaturation of negativity. It’s got to the point where people are turning away in droves from the news altogether and are looking for alternatives.

“There is a movement for a more positive and constructive media that is beginning to emerge. We want to continue to lead and inspire this.”

One of the Positive News team’s goals for the future is to work with journalism training bodies to teach journalists to write quality, constructive and positive content.

Tom Lawson, who started at Positive News as an intern in 2012, received much of his training at the paper and is now editorial assistant there.

“In an ideal world, Positive News wouldn’t need to exist,” he concludes. “The mainstream media would include solutions-based stories for a more balanced view of the world. For every problem going on in the world, there are usually people out there doing something about it. However, until these stories are recognised fully, Positive News fills a vital gap in news reporting.”

To help us understand our readership and decide how best to develop and expand, we need your feedback. Please take the survey and be in with a chance of winning some super ethical prizes from our carefully selected sponsors.

Up for grabs are £150 worth of ethical clothing from People Tree, a case of organic wine from Vintage Roots, £50 worth of pies from Higgidy, and a fair trade hamper from Suma. Plus, the first 100 people who enter online will each receive a free bar of Divine chocolate!

Take the survey now to help Positive News grow and for a chance to win a prize!