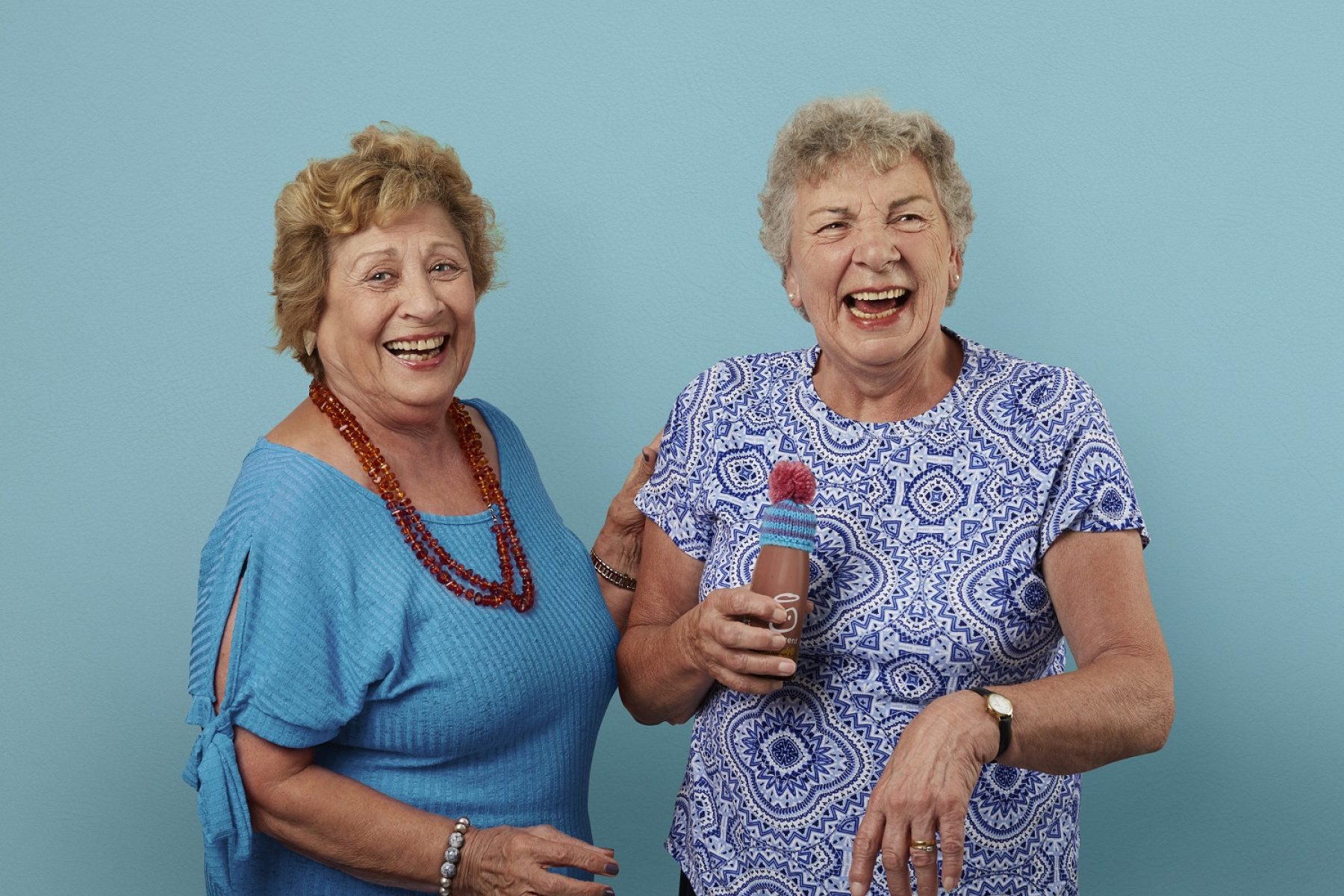 Since 2003, dedicated crafters up and down the UK have been knitting miniature woolly hats to sit atop bottles of innocent smoothies. More than six million hats later, the Big Knit has raised more than £2 million to help Age UK be there for older people. We unravel the story behind a cosy solution to the very real problem of social isolation

Words by
Lucy Purdy October 12, 2017
Lifestyle Society
Brands of inspiration
This article has been created by Positive News and supported by Innocent – the big knit

Since 2003, dedicated crafters up and down the UK have been knitting miniature woolly hats to sit atop bottles of innocent smoothies. More than six million hats later, the Big Knit has raised more than £2 million to help Age UK be there for older people. We unravel the story behind a cosy solution to the very real problem of social isolation

From unicorns to badgers, and from toadstools to Tyrannosaurus rex, creativity knows no bounds when it comes to the Big Knit knitters. In the past 14 years, inventive volunteers have knitted and purled more than 6 million tiny hats, all destined for the top of bottles of innocent smoothies up and down the country.

For each behatted bottle sold, innocent gives 25p to Age UK to help fund vital local and national services that combat loneliness. More than £2 million has been raised to date, and this October’s Big Knit is set to be the biggest ever.

It may seem a distant problem as you grab your lunchtime juice or smoothie, but social isolation is a huge issue for people in later life. In the UK, 3.9 million older people say TV is their main form of company, while 200,000 older people report that they haven’t had a conversation with friends or family for a month.

Over the years, we have received a range of really amazing hand-knitted hats through the doors of Fruit Towers

Age UK is the country’s largest charity dedicated to helping people make the most out of later life, and tackling loneliness is among their priorities. As innocent’s PR manager Eleanor O’Leary explains, the partnership made complete sense: “The Big Knit helps to fund Age UK centres where older people can enjoy things like quizzes, group lunches and dance classes. They are a social lifeline to thousands of older people, providing them with something that everyone, young or old, can relate to – the joy of friendship – and we wanted to share that with as many people as possible.”

June, one of the real-life stars of a video created to spread word of this year’s Big Knit, explains how loneliness crept in when her husband passed away. “My husband and I had been together since we were kids,” she says. “I was 13 when we met, he was 15. Very soon after I moved here [the house in which June lives now] my husband was taken ill, and passed away. If you’ve never been on your own, it’s very difficult.”

She discovered company at an Age UK centre where she and likeminded friend Eleonore chat over a pot of tea, share jokes and occasionally have a dance.

“Having company, to share things with and have a giggle with, makes life sweet again,” says June. “We have a ball. We have a really good time. With Age UK, you’re never alone.”

The knitting community, from experienced needle-clackers to novices, has risen to the Big Knit challenge with enthusiasm. Their designs range from the cosy to the quirky: from striped bobble hats in all colours of the rainbow, to fox and monkey hats, designs made from crocheted ‘granny squares’, post boxes, pumpkins, and even a woollen Usain Bolt, complete with his signature victory pose.

“Over the years, we have received a range of really amazing hand-knitted hats through the doors of Fruit Towers,” says O’Leary, “including Mr Men characters, emojis, ‘woolter-melons’ and even unicorns. Every hat makes a difference and goes towards helping Age UK with the very important work they do.”

They are a social lifeline to thousands of older people, providing them with something that everyone, young or old, can relate to – the joy of friendship

Important work it is, and Age UK is not the only group tackling it head on. There are face-to-face and telephone befriending projects, such as those run by the Royal Voluntary Service, British Red Cross and the 24-hour, free helpline for information and companionship, The Silver Line. The Campaign to End Loneliness is a network of national, regional and local organisations and people who want loneliness to be acted upon as a public health priority. They campaign on issues connected with loneliness, as well as collecting and sharing research. As the group points out, many people are already working to end loneliness across the country, neighbours, families, friends, charities, businesses, post offices, pubs and hobby and sports groups, whether they’re aware of it or not. The Big Knit is also, in itself, a way of getting people together: many people meet up to take part in sociable crafting sessions, with some groups producing hundreds of hats in total.

“We’re so proud of everything it’s achieved,” says O’Leary, “and incredibly grateful for the support we receive from the brilliant knitting community.”

The Big Knit hats are sold in shops throughout October. Find out more here

Gemma: “It’s a huge community effort. Everyone gets involved” Gemma runs a shop in Oswestry, Shropshire, which has been a collection point for Big Knit hats for the last three years. She hosts a knit-along in her shop to get things started, and each year the challenge is to beat the previous year’s total – they’ve gone from 827 hats in 2011 to a whopping 2,800 in 2013. The hats come in from all over: from knitting groups, from a lady in a nursing home, and last year from a seven-year-old boy, who contributed his first ever bit of knitting. Retired teachers Ali and Marion knit together in Gosport, Hampshire, and between them they’ve contributed 2,500 hats for The Big Knit over the years. “I’m not an expert; I never knit tension squares,” admits Ali, and Marion adds that they make up the patterns as they go along. The ladies are members of the Priddy Purlers knitting group. When not knitting hats, you’ll find Marion attending music festivals with her husband in their motorhome, and Ali whipping up another sweater for her husband, ‘Jumper Joe.’

Hina: “The Big Knit is a way to give back to the community” Hina is the director of Bluebird Care Lambeth, based in London. She introduced her team to the Big Knit last year, and she’s even managed to get her 10-year-old son into knitting. Hina learned her skills from her mum, who always made her sweaters – “with zig-zag patterns and bobbles all over, my friends were always well jel”, she claims – and this year she started early, recruiting all of her staff to create 100 little hats.

Marjorie: “I like the Big Knit because it provides an income for Age UK Bromley and Greenwich Marjorie’s been knitting for 75 years. She attends local knitting groups and always has her knitting with her, so she can whip up a little hat on the bus on the way to the shops. She’s knitted hundreds of hats over the years, including snowmen, cups of tea and owls, as well as hats embellished with pompoms, bells and beads. These days Marjorie goes into a school with her local Age UK and teaches children to knit, something she loves to do.

Jo: “I’m obsessed with knitting. I’m rarely without my needles” Jo knitted a lot when she was younger, but had got out of the habit. She’d do “an occasional baby jacket, but nothing really” – until she found out about The Big Knit through Facebook in 2011. Since then, there’s been no stopping her. She’s made close friends through knitting the little hats, and shares her knitting patterns with friends online. Her favourite hat pattern? Ollie the Octopus. “I immediately fell in love with him.” A collaboration between mental health charity Mind and the Craftivist Collective, A Positive Note asks stitchers to send messages to their MP, asking them to help improve the lives of people with mental health problems. But these are no ordinary missives: the notes should be positive and constructive in tone, and stitched – which is a great way to get your message noticed by busy MPs, says Sarah Corbett from the Craftivist Collective. “The collaboration is a ‘gentle protest’ approach to craftivism,” she says, “encouraging quiet, reflective crafting to produce something beautiful and useful to give to your MP to encourage them to use their power for good.” Knit for Peace matches knitters with good causes. ‘Send us your knitting, and we’ll put it to good use at home and abroad,’ say those at the London-based charity. As the winter draws in, the team is particularly in need of warm adult clothes, bed socks, scarves, adult hats and large blankets, either knitted or crocheted. They offer patterns on their website, but also welcome knitters’ own designs. Donations are sent to hospitals, women’s refuges, refugee drop-in centres, community groups and hospices, and donations of yarn and needles are passed on to allow people on low incomes to knit.

A Heart for Your Sleeve Climate change can feel overwhelming, and impossible to solve. Crafting is one way to be an ‘eco warrior’ rather than a ‘weary worrier’. A Heart for Your Sleeve urges people to hand stitch green hearts to celebrate planet Earth in support of The Climate Coalition’s #fortheloveof campaign.

“Our world is amazing,” says Corbett from the Craftivist Collective. “It blooms with remarkable people, with art that can make us laugh, cry and even change our world view, with technology that can connect us to our loved ones on the other side of the world. To make and wear your green handmade heart on your sleeve is a small, positive, beautiful and therefore influential and powerful act.”

You Are So Very Beautiful A campaign that was sparked on the internet, but manifests itself in real life is You Are So Very Beautiful. Crafters are encouraged to make a small sign that contains an affirmation beginning with the words ‘You are…’ before leaving it for an unsuspecting recipient to find. Signs can be placed on window ledges, bus seats, under the edge of flower pots – anywhere you feel needs an injection of goodwill. The challenge has already been taken up in the UK, US, Canada and Australia. Challenge injustice – and nurture its champions of tomorrow – via bunting, recommends Sarah Corbett, the ‘queen of craftivism’. She came up with Solidarity Bunting as a way to get kids thinking about how they can be in solidarity with people to improve our world. “It is a way to encourage the new craftivists to think about or discuss ways they can show solidarity for everyone from a child being bullied at school to the farmers who grow the bananas they might eat for breakfast,” she says.