Prior to 1994, South Africa received a lot of financial aid from other countries in the hope that it would be used to combat the apartheid system, but after a democratic government was established funds ceased, meaning lots of NGOs evaporated.

According to Dr Johann Graaff, a lecturer in development studies at the University of Cape Town, much financial aid had returned by the early 2000s, only to go dry again due to the world financial crisis. Private funders have cut back on their corporate social investment (CSI) and local government funds have become less reliable.

Dr Graaff points out that South Africa no longer qualifies for international aid, however, “it is never a whole country that is poor, but certain areas,” he says. “Even New York has its slums.”

Such is the case in Cape Town. A 20 minute drive from my suburb and you will be in a township that is home to a third of the city’s population. Cramped quarters, made from a patchwork of wood offcuts, slabs of tin, old crates and pieces of billboard hold families of up to 16, most of which do not have a steady job or income.

But who is to say happiness cannot be found here? Anyone from my country will know that it is in the nature of Africa’s people to laugh, make light of things and carry on regardless. We are a country of survivors, a place of innovation, motivation and finding the light where others may see only desolation and despair.

For every bit of suffering in Cape Town, there is an opportunity for hope. We may have children begging at traffic lights, we may have poverty, tension and train strikes, but we have a passion that holds us together and a determination to build from our ashes a society we are proud of, despite our differences, our past.

Despite the financial scenario, there are a number of fantastic NGOs working in Cape Town today, which are making headway in addressing its social issues. I found three gems whose work is proof of what’s possible. It wasn’t difficult to be touched as I witnessed their work driven by love, and saw how South Africa is abundant with a potential that we reach a little more each day.

The Cheali Campaign was started in 2004 by Chaeli Mycroft – an inspiring young girl with degenerative neuropathy, and four other girls, all between the ages of 6 and 12, who came together to raise money to buy a wheelchair for Chaeli, which would allow her more independence.

Working in collaboration with the South African government, this organisation now runs nine programmes nationally that are working to support and mobilise children with disabilities. It assists 3,000 children each year, providing wheelchairs, physical therapy, educational workshops or sports like wheelchair dancing. The Chaeli Campaign believes in output rather than focusing on what is ‘wrong’.

“Every child has light inside of them, but sometimes people don’t care to look,” Chaeli, now 17, said in her acceptance speech for the.

South Africa still has a way to go before those with disabilities are fully accepted and encouraged as an integral part of their communities, but the Chaeli Campaign is at the forefront of making this happen.

Mdzananda has been providing the 1.5 million residents of Khayelitsha Township with cheap or free veterinary services for the last 15 years. Up to 50 pet-owners a day receive consultation at the clinic on subjects such as de-worming, vaccination and blood diagnosis. They can also be referred to the onsite vet, who has the equipment to operate on the property. 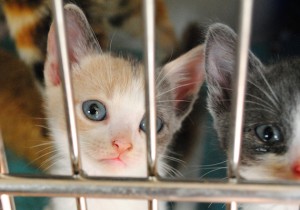 Kittens of a cat brought in to Mdzananda after being bitten by a dog. Photo: © Grant McPherson

“The biggest threats to domestic animals in the area are road accidents, Biliary or being poisoned by criminals,” explains Jane Levinson, head of Mdzananda Clinic.

Surviving on corporate donations, Mdzananda is at present the only animal clinic in the area – while onsite I chatted to a man who had walked for 40 minutes that day to bring his dog to the clinic.

Renovated wendy houses and ship containers make up most of the clinic, with enclosed garden areas for roaming animals. The staff is made up of local and international volunteers as well as some paid full time employees.

Working with local clothes retailers, The Clothing Bank sorts, repairs and distributes waste and damaged items. Empowering disadvantaged women, the organisation runs a 2-year training programme, which is attended mainly by unemployed, single mums who are taught important skills such as running a business and financial management.

Their scheme allows these women to buy stock at a low price, which they can then sell on at a reasonable profit. Those students who show high potential also stand a chance to be enrolled into another more prestigious business course.

“Most of these women come to us in debt, but the transformation is almost instant,” says Tracey Gilmore, partner of this corporate-sponsored venture.

The women they have helped now each make an average of R2,700 (approximately £220) a month. Research has shown that these women experience an increase in living standards and around 80% are able to pay off their debts.

Established only 2 years ago, The Clothing Bank are inundated with applications and are currently in the process of setting up another branch in a different part of the city.