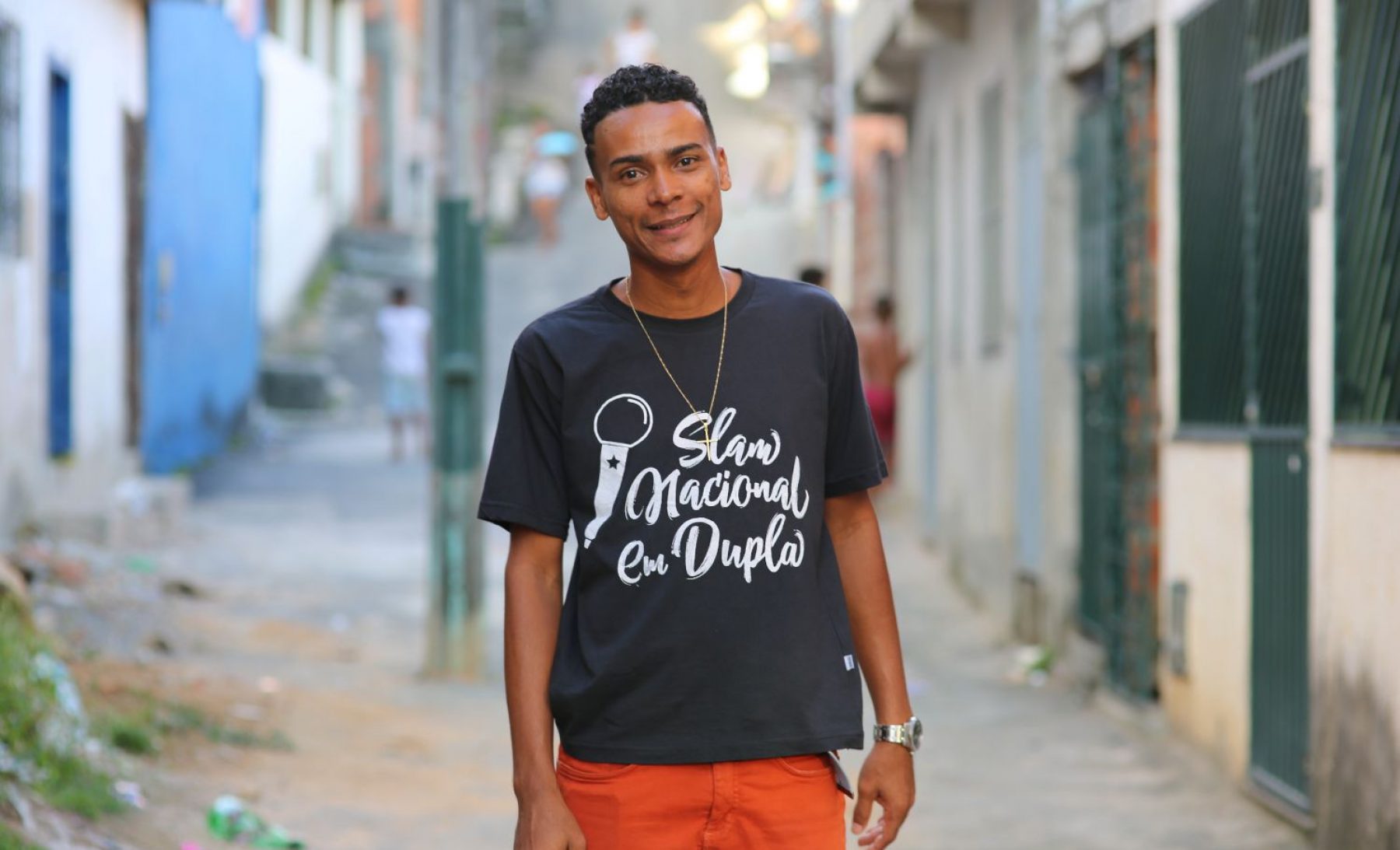 ‘Through poetry, I show there is more to my city than murder and trafficking’

‘People think my neighbourhood is a place only of homicide and trafficking. I use poetry to show them otherwise,’ says poet Evanilson Alves, from Salvador, Brazil

‘People think my neighbourhood is a place only of homicide and trafficking. I use poetry to show them otherwise,’ says poet Evanilson Alves, from Salvador, Brazil

A group of friends from Salvador in north-east Brazil are using spoken word to transform the way people see their city. From creating a cultural space in their community to working with women in prison, the collective Sarau da Onça also uses poetry to educate people about their rights. Collective member Evanilson Alves explains how

Poetry changed my life and I chose the pen as a way of sustaining it. Growing up, I didn’t have an outlet, but when I went to school, I started expressing how I felt through poetry. I am 29 now. You could say I’ve been a professional poet for eight years.

People think my neighbourhood is a place of homicide and trafficking, but poetry is a way to contradict its public image. I’ve lived that reality. I’ve been robbed, I’ve seen young people harassed and my friends have got caught up in trafficking. It’s a fast life; one where you end up dead or in prison.

I chose to live a longer life. I took internships that paid me 250 Reals (£49) per month. My friends asked why I was working for so little, but I knew this path would guarantee a future for me.

Art and poetry are my saviours. I am proving I can be a poetry teacher and make a living from it. Trafficking doesn’t impede the fact that we still build communities, that cultural groups are still prevalent in my community.

In May 2010, in a bid to contradict the image given to my community and show the different social movements here, four crazy friends got together to form a creative space, known as Sarau da Onça.

It’s a space of freedom, transformation and love. It’s a space where, when we get together, we hug each other and welcome one another. We can be ourselves, write our own stories and make them real through poetry and spoken word. Open mics are a huge tool of transformation in the peripheries of Salvador and beyond. We tackle topics such as valuing women, police violence, racism, prejudice, homophobia and black feminism. We also talk about love.

As a collective, we’re spreading our message far and wide. People outside Salvador know about our work and we’ve become a reference point at a national level. When we started, we had no idea our work would make such an impact. We have good relationships with schools and our aim is to make people see that poetry isn’t just an ‘event’ – it’s consistent and can be practiced anywhere.

As part of my activism work, I’ve been working in a female detention centre. Meeting these women for the first time was strange, weird and awkward, but I wanted to make life on the inside less painful. It took seven days to convince them to participate in a poetry workshop. Many of them had a low level of schooling. They weren’t in the habit of reading or writing, so it was about overcoming these obstacles and showing it’s possible to write.

I invited female leaders from across Salvador to come and work with these women. It was a place to exchange ideas and explore new possibilities. Despite being a hostile place, the most gratifying part of this experience was seeing how it turned into a space of reflection.

As the women started writing poems, they would call me over by my last name. “Alves! I wrote a new poem!” “Alves! I just wrote seven more poems!” I was like, “Girls, how are you writing seven poems in one morning? That’s crazy!” 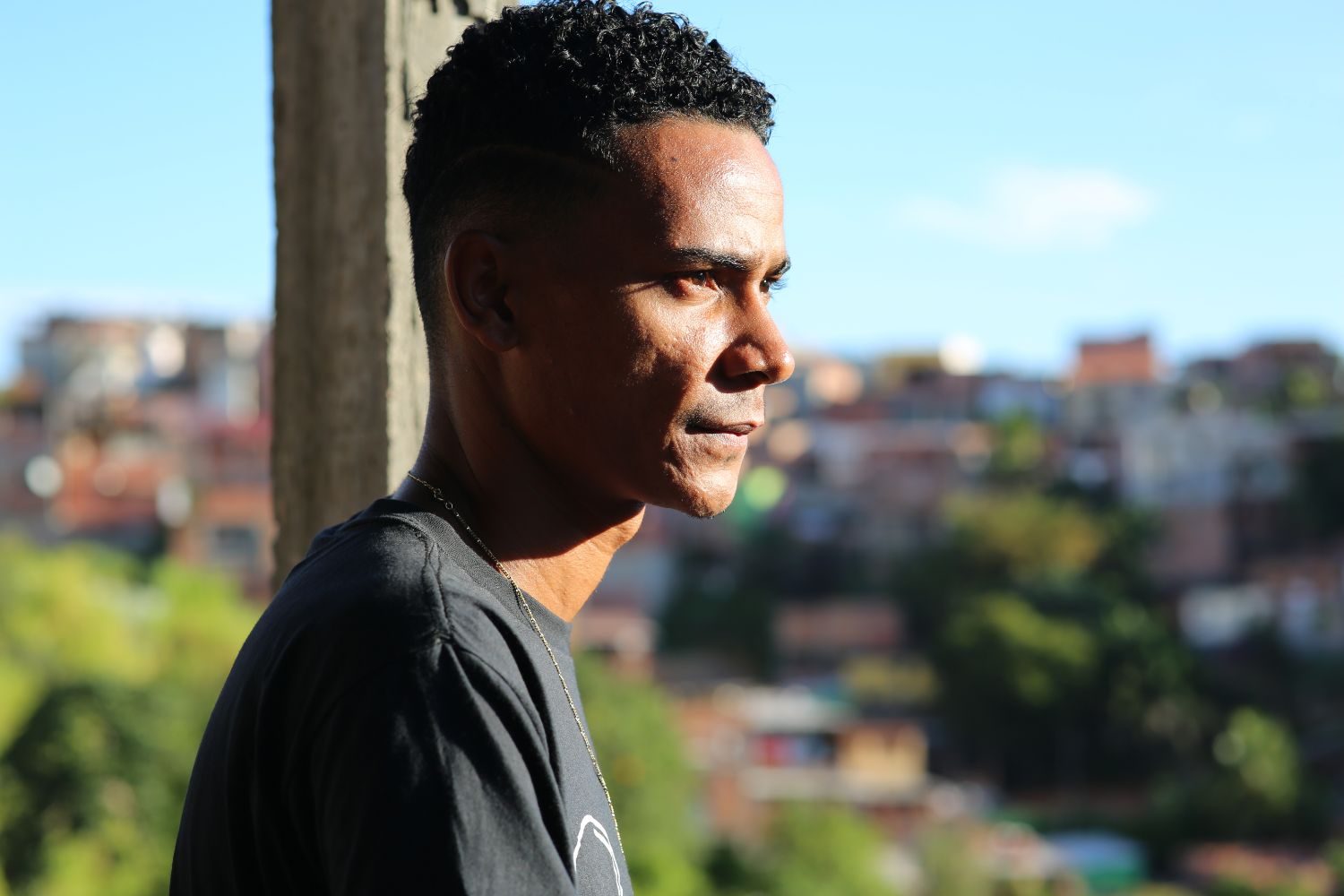 ‘Writing has such a transformative power. Poetry is a powerful tool for change. Now is the time to move forward,’ says Alves

Although pens weren’t allowed in the detention centre, it didn’t stop them from finding other sources of ink. Nowadays you’ll find a girl reading or writing in every corner of the detention centre. Others have become classroom monitors within the prison as a way of working towards their freedom.

Education must be prioritised in Brazil. When people are denied education, their rights are violated. Brazil has an interest in building more prisons, when they should be spending more money on building more schools and maintaining those that exist.

Amnesty International is helping ensure our work continues to educate others, too, thanks to the Quilombox. It’s a box containing educational materials [such as worksheets and leaflets on a range of activities, including dance and spoken word,] which doubles up as a projector.

The transformational materials provide an opportunity to discuss human rights through spoken word, dance and hip hop. The box was created by different human rights activists around the country. It’s simple, creative and appeals to a lot of people we work with, such as kids, teenagers and other young people. 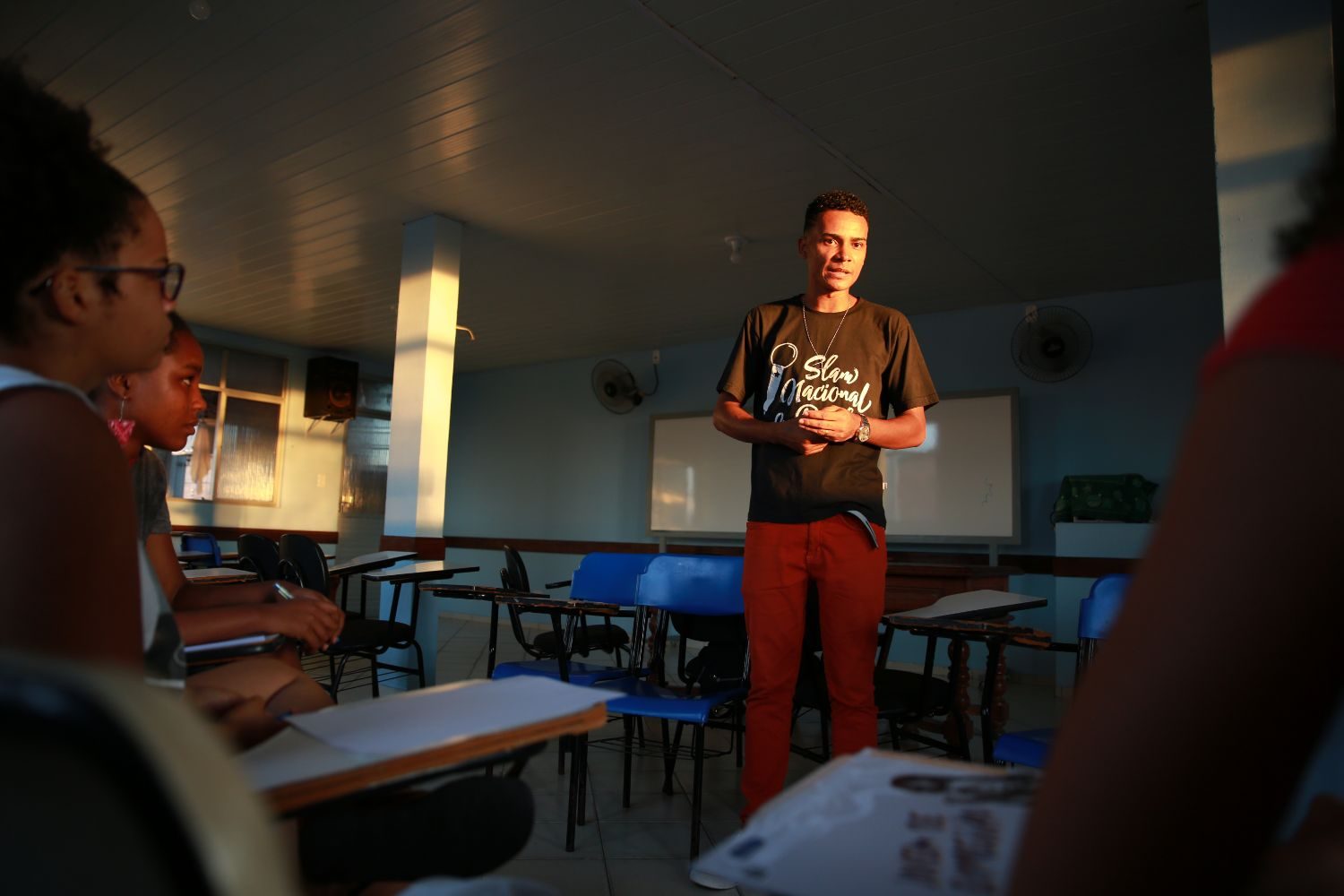 ‘Trafficking doesn’t impede the fact that we still build communities, that cultural groups are still prevalent in my community,’ says Alves

Our collective is going from strength to strength. We’ve released several books so far. Each launch has been an adventure. During one of them, we encountered so many problems, but when the event kicked off, people bought 20, 50, 70 books at a time. It was so unexpected. We’ve launched another book through my collective, called Poetry Creates Wings. Within four months of its release, we were invited to present it at one of the biggest book exhibitions in the world.

We try and sell our books face-to-face as much as possible and we also distribute them to schools. Writing has such a transformative power. Poetry is an addiction, a powerful tool for change. Now is the time to move forward. It’s time to arm young people with political thinking and show that change is up to us. Together, we can write our own future. 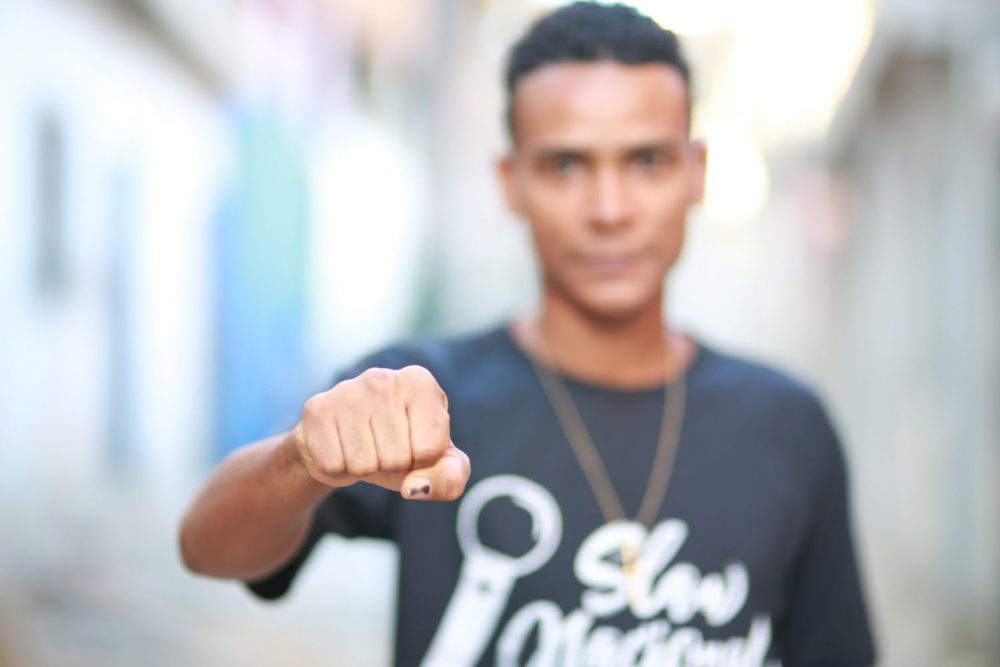 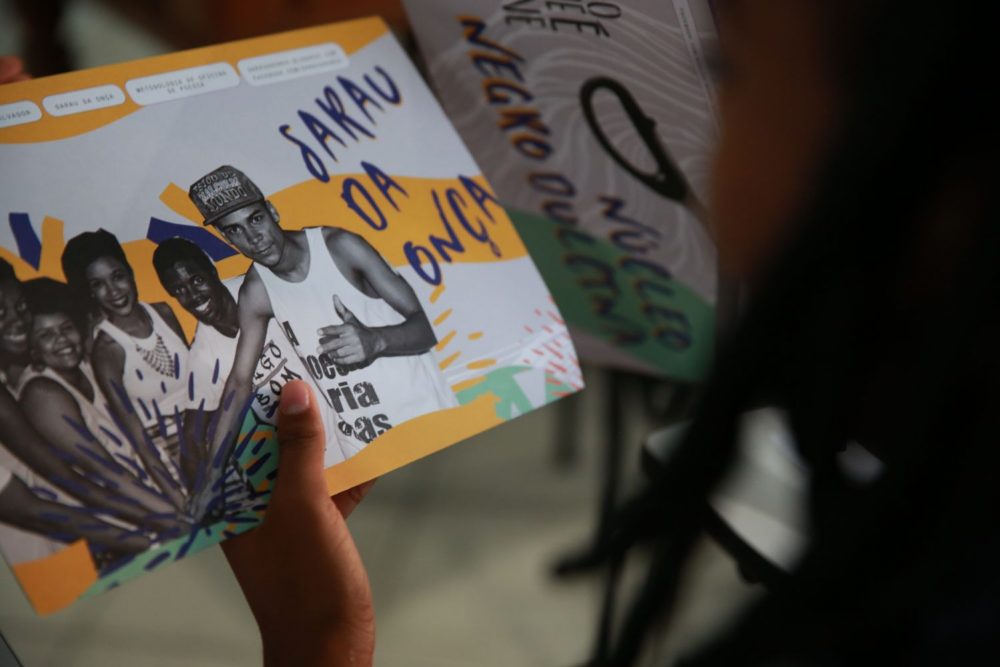