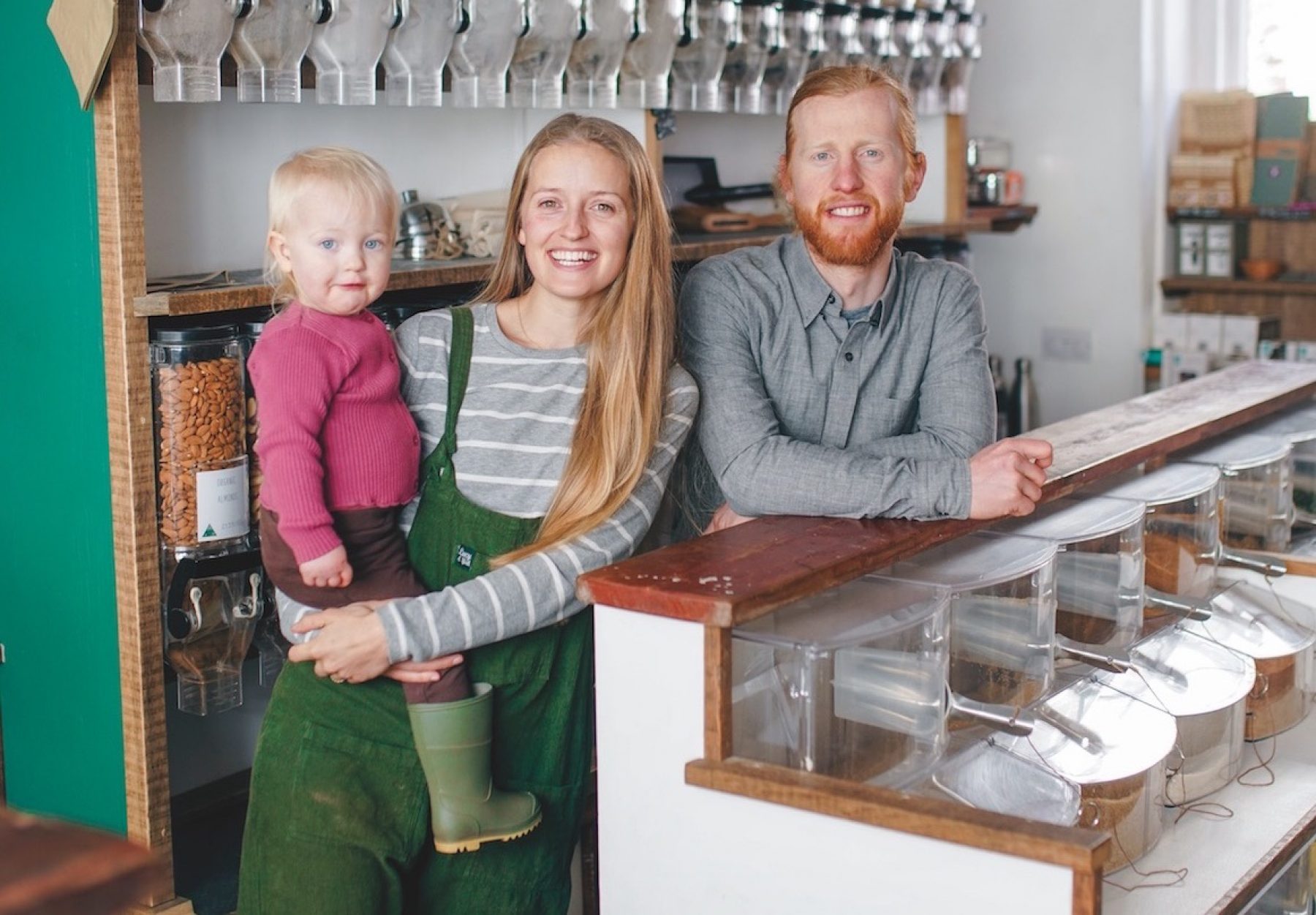 Zero heroes: the couple behind the UK’s first zero-waste shop

Nicola Eckersley and her husband, former professional footballer Richard Eckersley, run Earth.Food.Love, a zero-waste shop that stocks only ethical goods and where packaging is banned

Nicola Eckersley and her husband, former professional footballer Richard Eckersley, run Earth.Food.Love, a zero-waste shop that stocks only ethical goods and where packaging is banned

Free from packaging, adverts and robotic beeping tills, Earth.Food.Love offers a decidedly retro experience – but its owners think this is the future of shopping.

Nicola and Richard Eckersley were living in a flat in the centre of Manchester, when they became frustrated at the amount of plastic waste they were creating. “There were no recycling facilities, so we’d pile it up outside our front door,” says Nicola. “We read about a zero-waste shop in Berlin and thought ‘Wow – why aren’t they everywhere?’”

Their daughter – Willow, now 21 months – had just arrived, which made them re-evaluate things. “We wanted to feel proud of what we were doing,” says Nicola. “We wanted to do something towards a more sustainable future for Willow and future generations,” adds Richard.

They settled in Totnes, a Devonshire town with a greenfriendly reputation, on a hunch that locals would be receptive to the idea. And in March 2017, Earth.Food.Love opened its doors. Its 200 or so products are all vegan, organic and packaging-free, and customers are encouraged to bring their own containers, which are weighed before being filled. The shop sells mostly food but also products such as bamboo cutlery, canvas bags, wooden toothbrushes and mason jars.

Recycling is a popular buzzword among people keen to reduce their environmental impact but, says Nicola, avoiding waste in the first place is even better. “Plastic can never actually get recycled,” she notes, “it just gets down-cycled, eventually becoming a ‘lesser’ plastic. So even if you recycle, it ultimately ends up in landfill or the ocean.”

As awareness of plastic pollution has soared in recent months, the Eckersleys say it is no longer only committed environmentalists who show up in search of a cleaner way to shop. “We’re seeing people of all nationalities, careers and ages,” says Nicola. “Kids come in to eat organic dried fruit as their after-school snack. It’s such an exciting time: a new wave of people are realising they don’t want toxic packaging around their food. It’s definitely going mainstream.”

It’s such an exciting time: a new wave of people are realising they don’t want toxic packaging around their food

The shop’s electricity comes from green energy company Ecotricity; the business is part of the sales donation scheme 1% For The Planet; and the Eckersleys accept the local currency, the Totnes Pound. But it’s not a holier-than-thou approach, more about simplicity and common sense. The shop is a gimmick-free zone, says Nicola. “We don’t feel we need to entice people to eat our products. The colour of this lovely, pure, organic food is the attraction: it speaks for itself.”

Despite its ethical underpinning, the shop has a tangible sense of fun. Among the most popular attractions are two grinding machines that customers can use to make their own nut butter. “It’s peanut and almond every day, and we swap the almond for cashew on Tuesdays,” says Richard. “It tastes better, because it’s fresh and hasn’t been sitting in a jar for six months, and it’s cheaper too, so it’s a win-win.”

The weirdest container a customer has turned up with? “Someone brought in a huge compost bin – clean, obviously – that they filled with oats. Another filled up loads of jars and bags, then took them away in a suitcase. One lady in her 80s brought in a yoghurt pot to buy the tiniest amount of almond butter to take to her friend to try.” At Earth.Food.Love, customers are encouraged to bring their own containers

Outside the Totnes bubble though, or the clean-living Instagram version come to that, is zero waste really attainable? The Eckersleys are well aware that, in many areas, people have very little choice but to buy plastic-covered produce. And they are emphatic that ordinary people should not have to carry the packaging burden alone.

Their top tip for people keen to embrace zero waste? “Don’t be too hard on yourself,” says Richard. “Our process was slow and gradual. But remember that you cast a vote every time you spend money. Every time you ask a shopkeeper or a manufacturer about their plastic, you’re planting a seed of change.”

“Take little steps and try to plan as much as possible, so you don’t end up relying on the convenience of ready-made meals, plastic cutlery or plastic bags and bottles,” suggests Nicola. “Life is so fast-paced, especially in cities, but try to make time to respect your food and prepare in advance.”

Every time you ask a shopkeeper or a manufacturer about their plastic, you’re planting a seed of change

Business is booming, say the couple, and they have been inundated with requests from people who want to launch their own zero-waste shops. They have uploaded a free pdf containing guidelines to their website to help.

“Shops are now going to be popping up in Bristol, Birmingham and Cardiff, which is fantastic. We’ve even been helping out people in New Zealand and in Cape Town,” says Richard. “We make ourselves laugh,” says Nicola. “Are people really taking business advice from us?!” Launching a shop while bringing up Willow hasn’t been easy – “We’re knackered!” says Richard. But he adds that their mantra throughout has been: “We’ll figure it out”. And they have. Nicola mentions a quote the couple came across when they were still in Manchester and pondering what to do next. It was: ‘If not me, who? If not now, when?’

“That just really resonated with us,” she says. “Cool! There’s no time like the present. Let’s do it.” 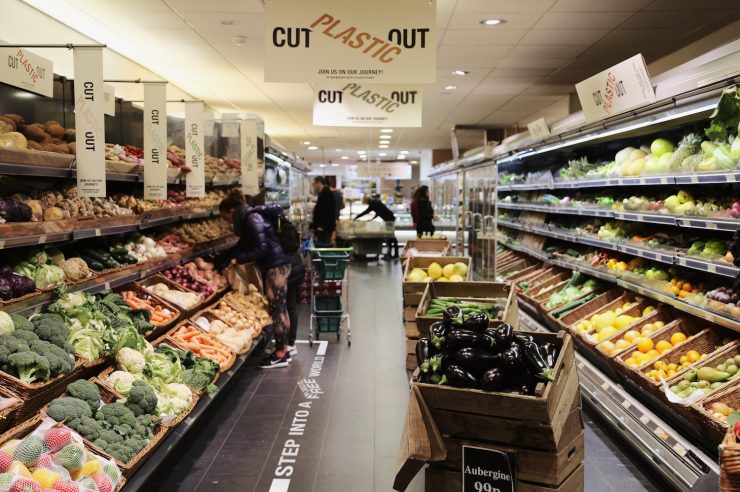 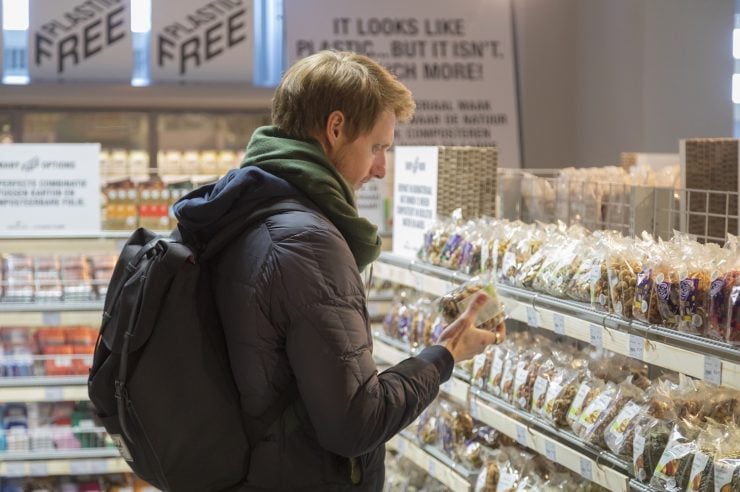