Not all that’s gold glitters

The biochar debate may have quietened down in recent years, but entrepreneur Craig Sams – founder of Green & Blacks chocolate – says his research is showing promising signs of biochar’s potential in the battle against climate change

Three years ago a substance called biochar emerged and divided the environmental movement. Some environmentalists and scientists claimed it to be the future of agriculture and an answer to all our climate change prayers, while others said it was a disaster waiting to happen.

The idea behind biochar is that by cooking natural waste materials from forests and other land at high heat, carbon that would normally be released into the atmosphere when the matter decays would instead be locked inside the charcoal produced. If this is then dug into soil, it improves the soil’s fertility. This means that plants, trees and crops – which naturally draw in carbon from the atmosphere – will grow faster, resulting in more carbon being absorbed while agriculture benefits from better yields.

Doubters, like the Guardian’s respected environmental columnist George Monbiot, believe biochar fans are glamourising a form of charcoal. And, while he and others of like mind do see the potential virtues of biochar, they have concerns – primarily that masses of land and habitat will be cleared to create it.

While the debate has now dampened, one man – the founder of Green & Blacks chocolate, Craig Sams – is keen to pursue the possibilities of biochar. Having set up a company called Carbon Gold in 2008 to develop biochar commercially, he now sells biochar kilns and the material itself with good success, he says. 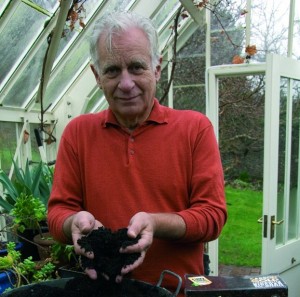 Being an environmental science graduate and curious to know more, I visited Sams at his test site in Hastings.

A serial entrepreneur with a focus on ethical and health products, Sams’ first venture was a macrobiotic restaurant in London during the sixties. He then went on to found Whole Earth Foods and two independent bakeries before setting up his famous Fairtrade chocolate company in 1991 – eventually selling it on to Cadbury in 2005 for £20m.

Now living in Sussex, after leaving London with his wife and co-founder of Green & Black’s, Jo Fairely, the 67-year old American, says: “I moved down here to have a quiet life…until I started to get excited about biochar.”

Sitting in his idyllic garden with a Fairtrade organic coffee, he tells me he was inspired after reading a book by Charles Mann called 1493. It describes how early explorers to the Americas discovered 3,000-year-old terra preta, or ‘dark earth’, in the Amazon.

“Farmers made the notoriously poor jungle soils workable with biochar,” says Sams. “They took their agricultural and forestry waste, smeared it with clay and set fire to it. They would block off the air and that would turn it into biochar. That really triggered my interest and it was around the time that people were getting the buzz about biochar – about five or six year ago,” he recalls.

In his 2006 book The Revenge of Gaia, James Lovelock, a former NASA consultant and creator of the Gaia theory, claimed that biochar was the world’s only hope of mitigating catastrophic climate change. Monbiot’s 2009 article in the Guardian, however, described the material as: “A low-carbon regime for the planet that makes the Atkins diet look healthy.”

As well as his main concern – that whole swathes of forest would be cut down to burn for biochar, Monbiot also said: “In some cases, charcoal in the soil improves plant growth, in others it suppresses it. Just burying carbon bears little relation to the farming techniques that created terras pretas. Nor is there any guarantee that most of the buried carbon will stay in the soil. In some cases charcoal stimulates bacterial growth, causing carbon emissions from soils to rise.”

Sams remains convinced of the material’s benefits. He takes me to a small coppice woodland where he first started experimenting with making biochar using highly-efficient iron kilns.

He reaches into a sack and crumbles a piece in his hand. “It’s hard to see, but for microscopic organisms that’s a big space…that’s a castle,” he says, commenting on the porosity – just one of the many claimed benefits of biochar for soil. Porosity helps mycorrhizal fungi grow, which feeds nutrients to plants. It also helps retainwater and reduce nutrient run-off. In theory, all of these factors should help to improve plant growth, which in turn helps sequester more carbon.

Organic market garden manager Jez Taylor has been using Carbon Gold’s product for the past year. In Horticulture Week magazine earlier this year he said: “Germination rates have been much better this year. You don’t get drying out or shrinkage – it sustains the plant quality over time.”

“Ultimately, what we see is that an awful lot of this will be done on a small and local scale”

In Sams’ own greenhouse I see some biochar in action. The plants all look healthy in their beds of GroChar, Carbon Gold’s mix of biochar, seaweed and coir (fibre from coconut husks). By combining these ingredients, the entrepreneur believes biochar is more efficient than peat-free compost and could replace peat as a growing medium in horticulture.

“By mixing biochar with coir, we’re getting as close to peat as possible,” he explains. “Peat is also very cheap. At the moment it’s five pence per litre more for biochar than peat. But one litre is enough for forty plants, so the price difference is nominal.”

Despite its benefits, peat takes thousands of years to form and its extraction causes habitat loss and high levels of greenhouse gas emissions. The government’s environment department Defra is aiming to phase it out entirely by 2030.

By contrast, biochar has the potential to be carbon negative, according to some experts. “The biochar process captures 70% of the carbon that would otherwise have been released in the atmosphere by burning or decaying,” says Sams.

He is keen to prove the technology further and is currently running 27 research trials in collaboration with Edinburgh University and Duchy College in Cornwall with Carbon Gold’s biochar.

The kilns range from a half a tonne capacity to three and a half tonnes and cost £3,500-£20,000. Though standard charcoal-making kilns cost less at around £1,000, only 10% of what goes in comes out as char, and according to Sams they cause 80-90% more emissions than biochar kilns. In the Carbon Gold kilns, the gases are fed back into the main chamber and burned off rather than being emitted. “The whole process takes a day and 25% of the material input is turned into biochar,” he says.

Stuart Haszeldine, a professor at the University of Edinburgh’s UK Biochar Research Centre, says the material will hold carbon in the soil for thousands of years and claims it is “one of the carbon pumps we need to develop right now to take carbon back out of the atmosphere.”

As well as selling processed biochar in the UK to gardeners and growers, Carbon Gold is also looking at potential benefits to agriculture in the developing world. Ten kilns were shipped to Green & Black’s cocoa producers in Belize four years ago to enable farmers to produce their own biochar from agricultural waste. So far feedback has been positive.

“Normally it takes six or seven years for a cocoa tree to fruit. All of the trees that were planted with biochar were producing fruit within three years,” says Sams. “These farmers are excited – it makes a big difference to the economics of growing cocoa and will make farming more of an attractive proposition for young people.” 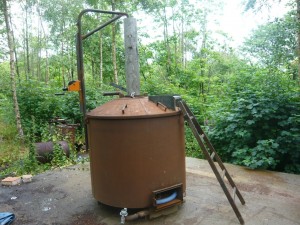 So what does he say to critics like Monbiot and anti-biofuels campaign group Biofuelwatch, who fear huge swathes of farmland and wildlife habitat could be cut away for biochar, as has happened for biofuels?

“It’s perfectly legitimate; I don’t disagree with Biofuelwatch,” he tells me. “Where they’ve gone over the top is in criticising the value of biochar. Ultimately, what we see is that an awful lot of this will be done on a small and local scale. Our vision is that people will have a truck with a kiln on the back and they’ll go to farms when they’ve just trimmed the hedgerows or coppiced the woodland.”

Even George Monbiot believes that there could be some merit in using biochar in this way. At the end of his article in the Guardian, he says: “None of this is to suggest that the idea has no virtues. Nor does this mean that charcoal can’t be made on a small scale, from material that would otherwise go to waste.”

However, there have also been questions about whether the waste biomass used for biochar should be used to create energy instead. When I question him on this, Sams doesn’t hesitate to answer: “There are lots of ways to generate energy, but only one to take carbon out of the atmosphere and that’s photosynthesis. Trees have been taking carbon dioxide out of the atmosphere for millions of years, so it’s a tested technology.”

It’s apparent that Sams has a different vision of biochar than the mass-scale scenario feared by critics, and his company has been involved in pushing for industry standards for sustainability – which will be published by the International Biochar Initiative (IBI) later this year.

Compared to that of environmentalists who see biochar as a silver bullet for tackling climate change, Sams’ vision is perhaps also a more realistic one. Most importantly though, if he’s right about biochar’s potential, the technology is simple, relatively cheap and available right now.