Drylands in the Tigray region of Ethiopia, home to more than 4.3 million people, are being restored on a massive scale. Villagers volunteer for 20 days each year to help make it happen.

Drylands in the Tigray region of Ethiopia, home to more than 4.3 million people, are being restored on a massive scale. Villagers volunteer for 20 days each year to help make it happen.

‘We are people who live through work.’ OK, as national anthem lyrics go, it may not be the punchiest. But Ethiopians are a pragmatic people. Poetic sentiments are all well and good, but star-spangled banners and long lives for noble monarchs don’t put food in your stomach. Hard work does.

And hard work is precisely how rural communities in the country’s mountainous north kicked off this new year, just as they have every year in recent decades. In Ethiopia’s Tigray province, hundreds of thousands of villagers – the vast majority of whom are subsistence farmers – leave their fields in January to join together in a mass conservation effort.

Over 20 consecutive days they head out with spades and picks and build hillside terraces, construct soil bunds (embankments), install basic irrigation systems and create micro-scale dams. In September, the process is repeated, only this time they plant seedlings on the province’s denuded hillsides.

On visiting the region, the need for such interventions is immediately obvious. Located in the far north, close to the border with Eritrea, Tigray has always been a dry, mountainous, tough place to live. Today, due to increasingly erratic rains and decades of gradual deforestation, eking out a living there is harder than ever. But Tigray is also now greener than it has been in the last 145 years. At a time when hundreds of millions of people around the world are directly threatened by land degradation, could the region become a blueprint for change?

“Fifteen years ago, this whole valley was absolutely barren. There was no irrigation and very little drinking water. Much of the water, we had to bring in from elsewhere,” explains Gebre-Egzabihir Gebre Washid, a village council leader in Merere, a remote community in central Tigray.

He stayed, but many of his neighbours didn’t. Having once been proud producers of food, they joined the queues of food aid migrants in far-off towns and cities.

The scene is very different today. Looking down from his hillside plot, its earth freshly ploughed, Gebre Washid points to the verdant valley floor below. Rich grazing land gives way to neat fields of barley and the grain teff, a much-loved staple of the Ethiopian diet. Beyond, the thick canopy of a newly planted wood encircles a Coptic church. As with the rest of the province, the transformation was not immediate. Nor is it complete. Dozens of stone terraces and sink wells have been built by Gebre Washid and his remaining neighbours over recent years, but dozens more are planned. Also on their to-do list is extending a narrow irrigation ditch that currently snakes along the contour of the hill. It is 9km long: they plan to double it.

“As a community, we’re used to cooperating. It is part of our culture,” he explains. “If a neighbour needs an extra pair of hands at harvest, we help him. This is the same. It is something that we do.” 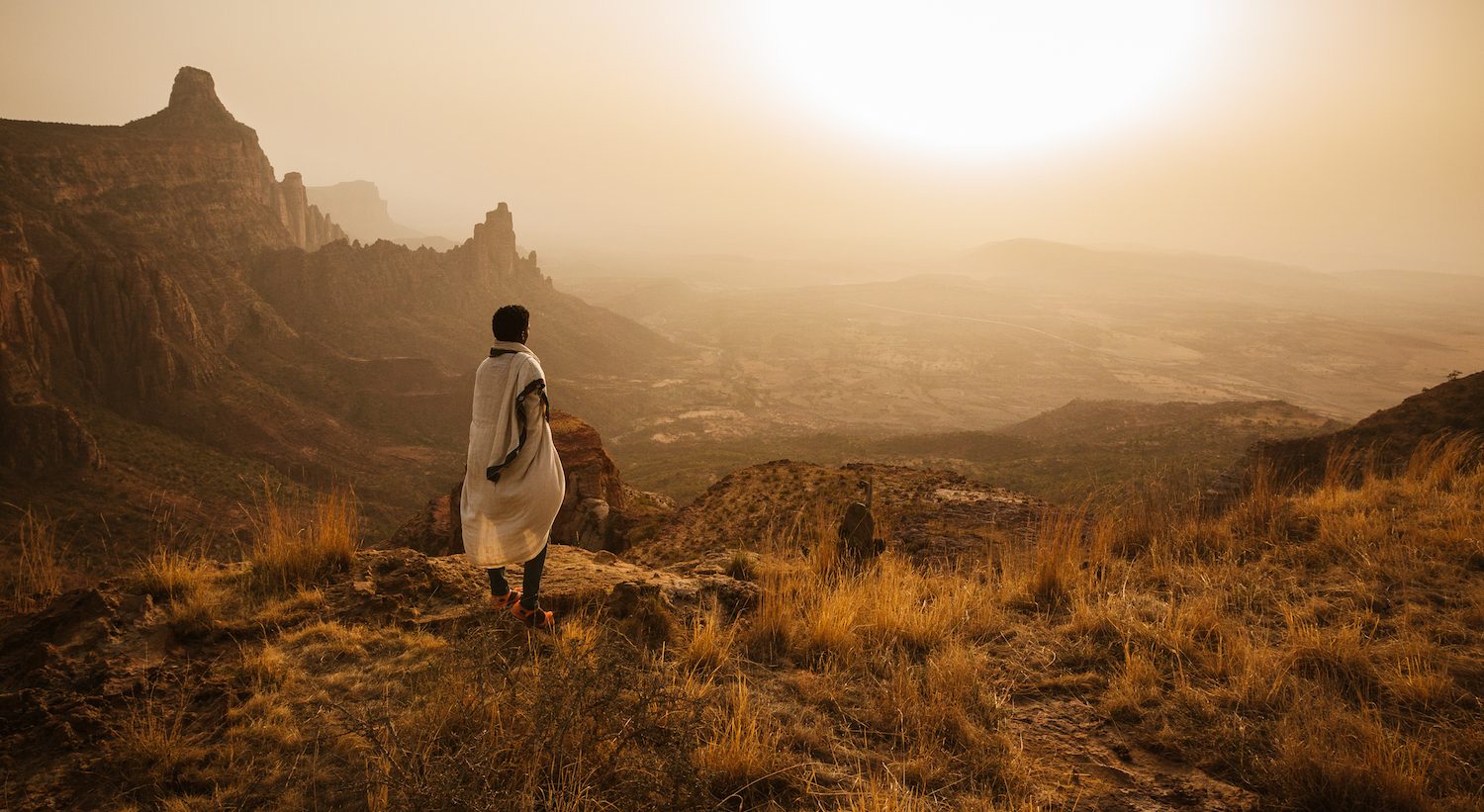 With the help of volunteers, drylands in the Tigray region of Ethiopia are being restored. Image: Barcroft Media / Getty

Tigray’s 30-year experiment in collective mobilisation isn’t quite as spontaneous as his words imply. The provincial government employs an army of officers who are on hand to train, advise and organise villagers into work groups. Nor is the ‘free’ labour entirely voluntary. Ethiopia operates a food-for-work programme for the very poor, which obliges recipients to carry out public works in exchange for a small daily subsidy. The land rehabilitation project is on the list of required activities.

Right now, it takes place against a backdrop of political crisis. In February, Ethiopia entered a state of emergency after prime minister Hailemariam Desalegn announced his intention to step down. The ruling EPRDF coalition’s council imposed emergency rule, the latest development in years of political unrest there.

We’re used to cooperating. It is part of our culture. If a neighbour needs an extra pair of hands at harvest, we help him

But the work groups aren’t an echo of the old coercive days of Stalinist Russia or Maoist China. The majority of Tigrayans give their time willingly. Why? Because, as pragmatic people living in an unforgiving environment, they know the benefits of working together. Put bluntly, it’s the difference between feeding their families and going hungry.

So affirms Gidey Gebrekrstos. A 64-year-old farmer, he has seen the Enabered watershed where he lives alter hugely over the last decade, thanks to his community’s joined-up efforts.

Before, a 12-metre gully ran like a scar down the middle of the watershed. Flash floods happened regularly. Now, thanks to terracing on the higher hills and a multitude of stone-filled gabion dams, the gully has transformed into a gurgling stream with a regular water flow. “The soil before was red and bare, like raw meat. Now, it gives me fodder for my cattle,” Gebrekrstos says. “If people work together, change is doable. Everything is possible.”

The soil before was red and bare, like raw meat. Now, it gives me fodder for my cattle

On 2 March, the country’s national anthem blared from televisions and radios. The annual celebration marks Ethiopia’s routing in 1896 of an Italian colonial army near Adwa, a stone’s throw from Gebrekrstos’s home.

The unprecedented victory later became a rallying call for nationalist movements across Africa. Today, the situation is different. It is the climate, not colonisers, that threatens Tigray’s soil. Now, as then, the source of their success – and of their ongoing inspiration to others – centres on their willingness to act collectively.