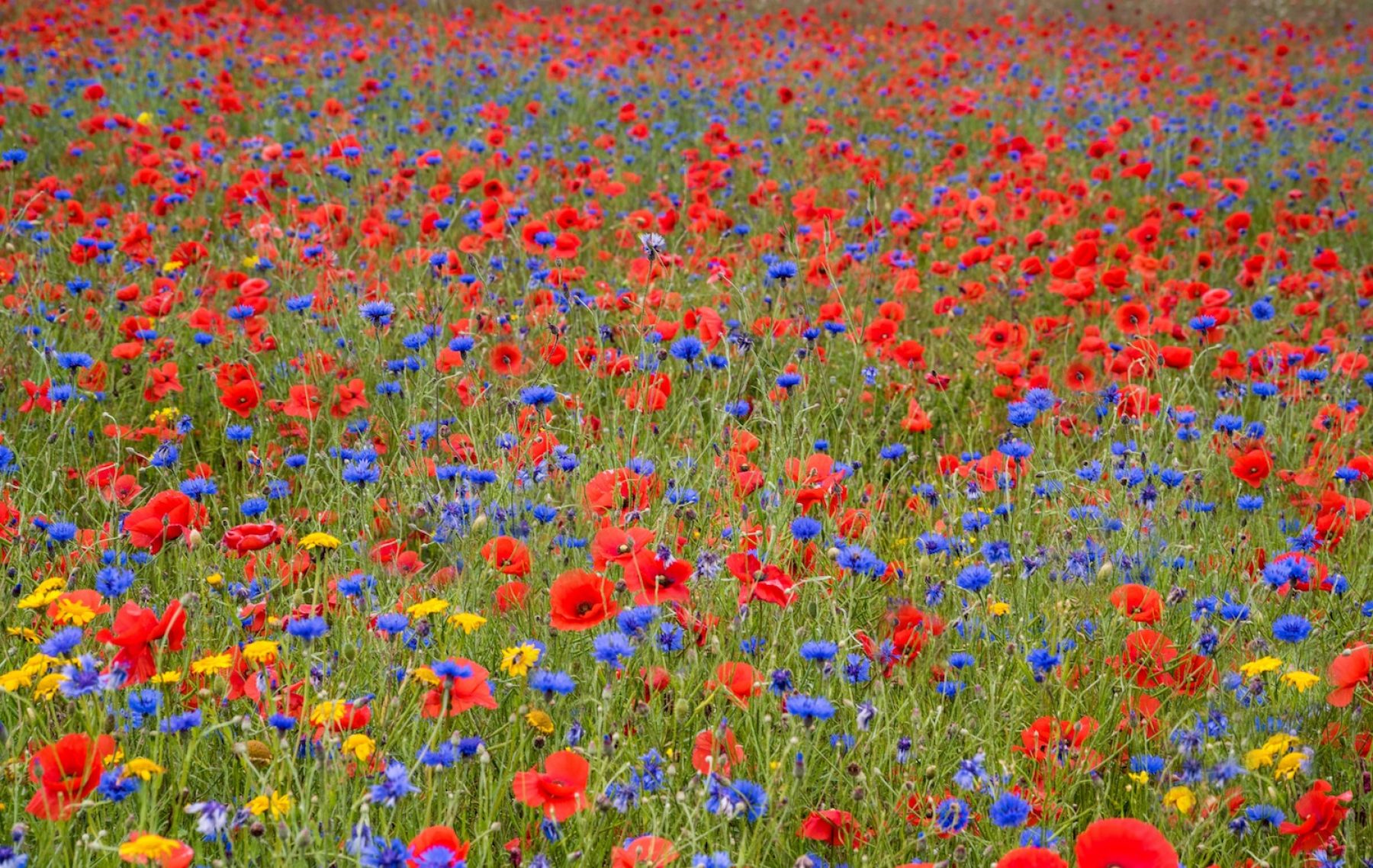 Maps reveal the ‘people’s choice’ wildflowers: one for each UK county

Read on for a guide to the wildflowers that represent each UK county, as chosen by members of the public, and their often-fascinating stories

Read on for a guide to the wildflowers that represent each UK county, as chosen by members of the public, and their often-fascinating stories

When you think of the counties of the UK, your first thought might be of the boundaries we’ve drawn, the accents to be heard, the county coats of arms or mottoes. But how about, more simply, what you find underfoot as you tread the land?

In 2002, conservation charity Plantlife International decided to award a new symbol to each of the UK’s counties: a wildflower chosen by the public of each region. While pollution and intensive farming contributes to the loss of a species of wild plant every year, there are also hundreds of conservationists who are dedicated to protecting them.

“Those who stop to appreciate our gentle but resilient little neighbours are treated to a parallel world of myth, beauty, and science,” said Bonnie Payo who helped compile the information.

“But perhaps most valuably, wildflowers are a source of refuge and pollination for countless species of wildlife – as many as 40 different species per square metre – making them a vital part of keeping the British Isles and the wider world in motion. And they’re right there under your nose.”

Marketing agency NeoMam Studios has created a map showing the flowers chosen by each county. See below for the wildflower selected for where you live.

Nottinghamshire has embraced the non-native Autumn crocus (Crocus nudiflorus) as its county flower: most likely these leafless lilac flowers found their way to the UK as a cheap substitute for saffron in monastery herb gardens. They escaped, and once covered the flood-meadows of the River Trent, making them a common sight at Nottingham markets. Much of that land has now been developed, but the autumn crocus flourishes still at roadsides and on commons. 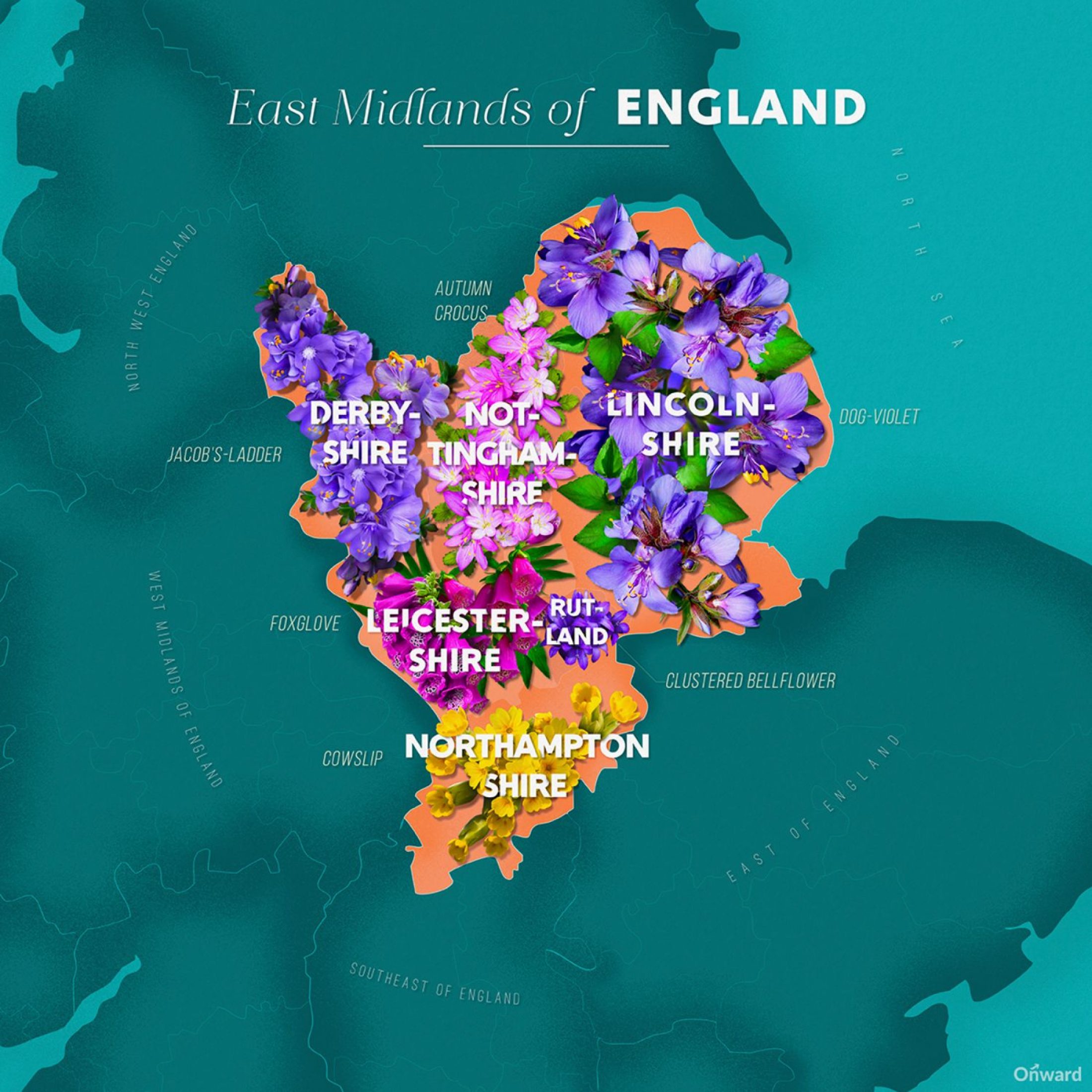 Although there are many wildflowers at risk in the UK, most of those chosen to be county emblems are in good health – perhaps because voters were more familiar with more common blooms. But in the East of England, a couple of ‘vulnerable’ and ‘near-threatened’ plants were chosen: the Pasqueflower (Pulsatilla vulgaris) of Cambridgeshire is one example. Its rarity is no surprise if it springs from the blood of Viking warriors as legend suggests. Not so many Vikings seen around Cambridgeshire lately though. 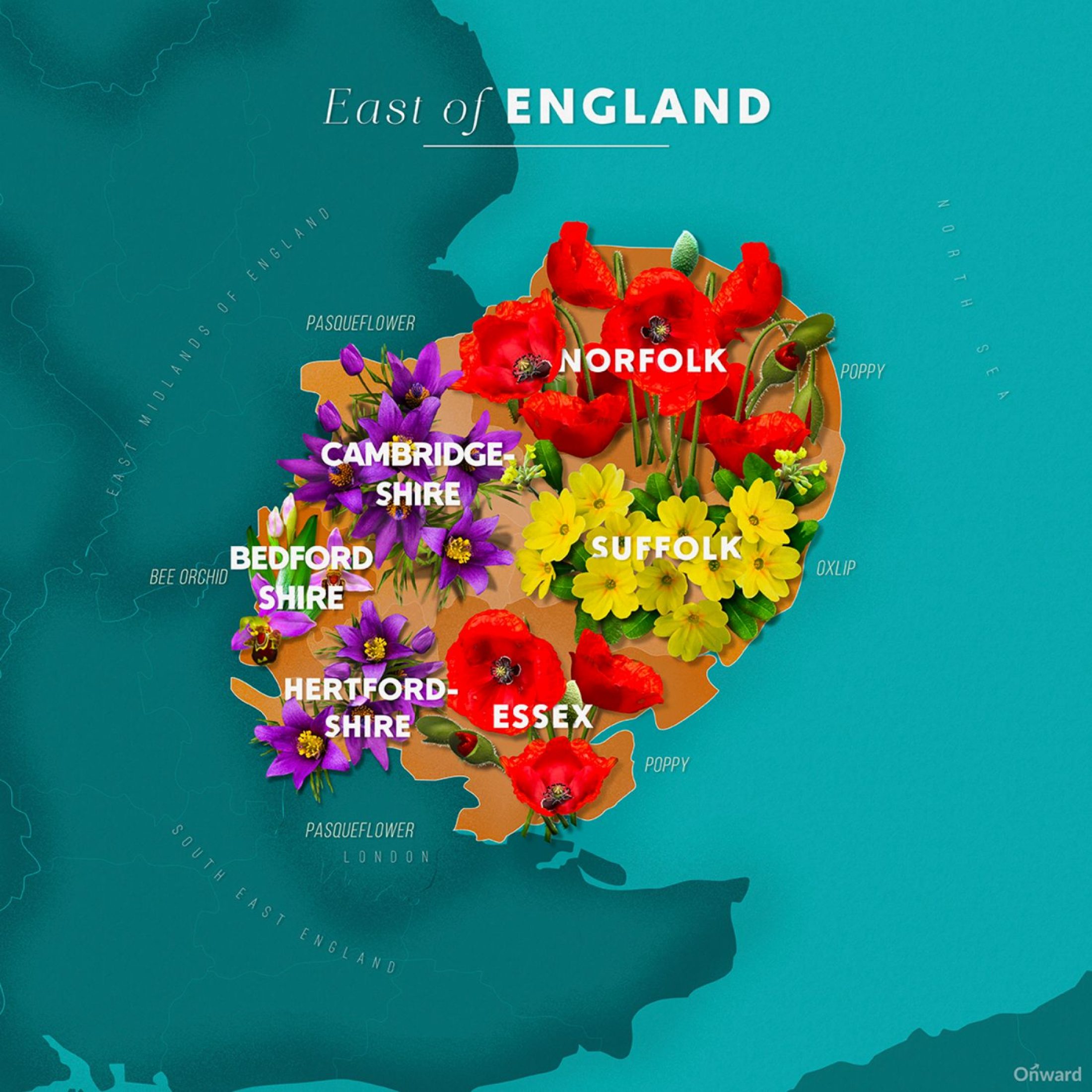 Londoners chose the pink-purple Rosebay willowherb (Chamerion angustifolium), which was commonly seen around town after the London Blitz. It actually thrives on scorched and otherwise barren land – it has even been nicknamed bombweed. As such, rosebay willowherb is a hopeful plant, adding colour and the potential for new vegetation in areas ruined by war or industry. It’s also very useful, and is often used to make fabrics, medicines, and sweetly spicy foods such as sweets, syrups, and tea. 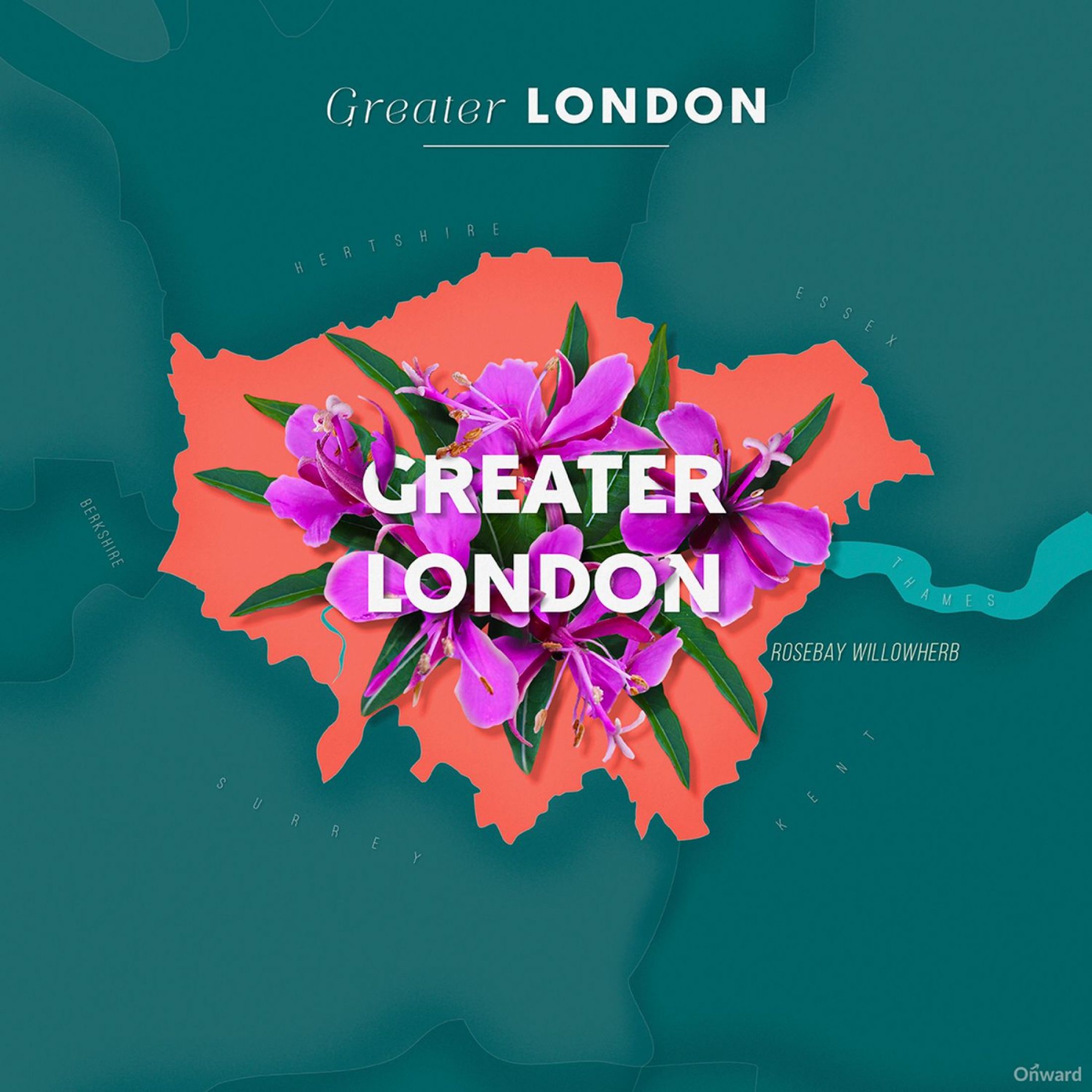 The very small, very bright blue Spring gentian (Gentiana verna) adopted by the county of Durham – the species reportedly can’t be found outside of Teesdale – is under threat due to its rarity and the overgrazing of upland areas. Beware, because if you take it indoors you may be struck by lightning (according to folklore). Elsewhere in the region, you’ll find the Bloody crane’s-bill (Geranium sanguineum), the county flower of Northumberland. The crane’s bill of its name refers to long red stem rather than the magenta leaves. 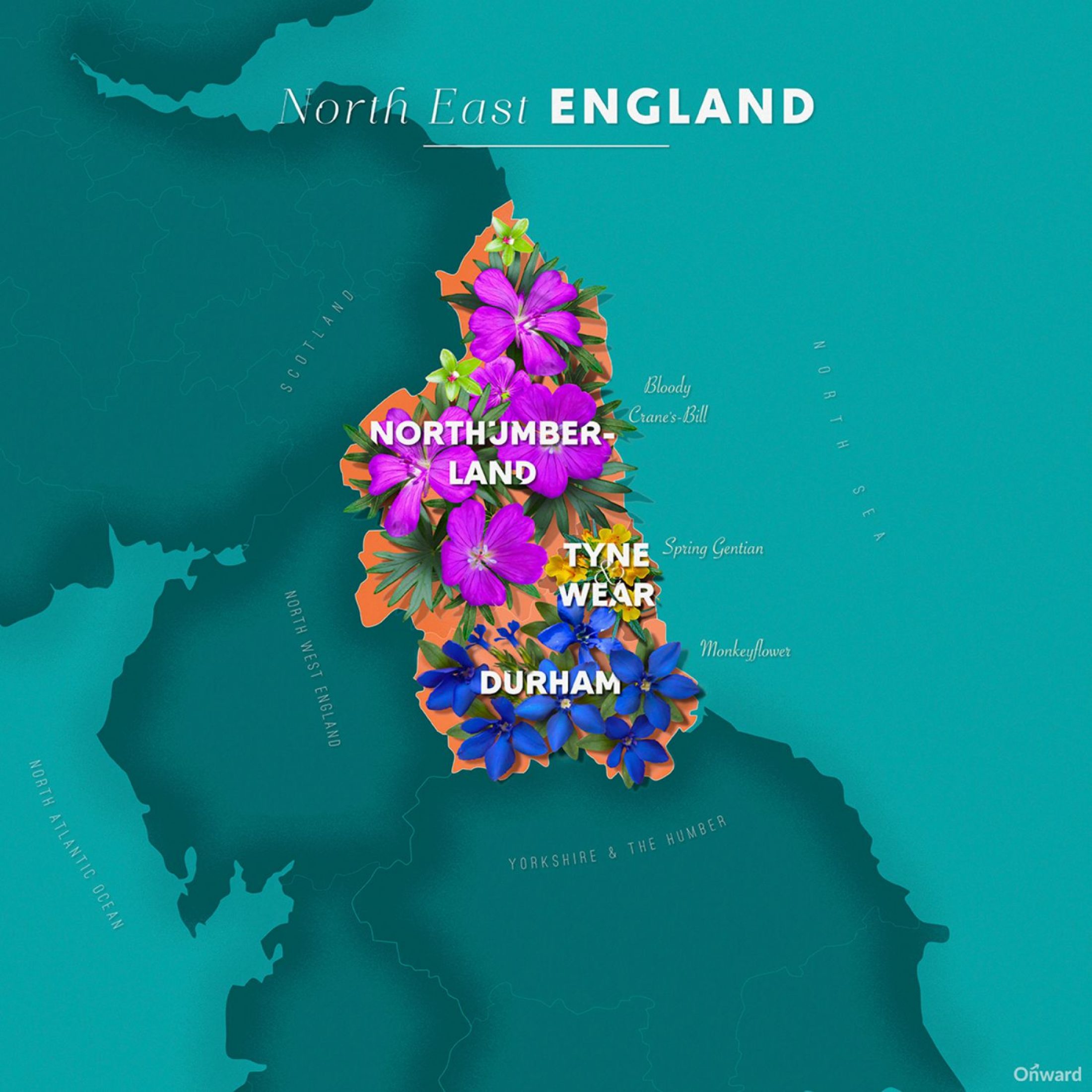 The wildflower choice of Greater Manchester reflects the region’s history: the fluffy white flowers of cotton-grass (Eriophorum angustifolium) resemble the textile that powered Manchester through the dark days of the industrial revolution, when the city was nicknamed Cottonopolis. While cotton-grass is mostly unusable for textiles, the seeds and stems can be eaten and have even been used in the treatment of diarrhoea – giving a double-meaning to its alternative name, bog cotton. 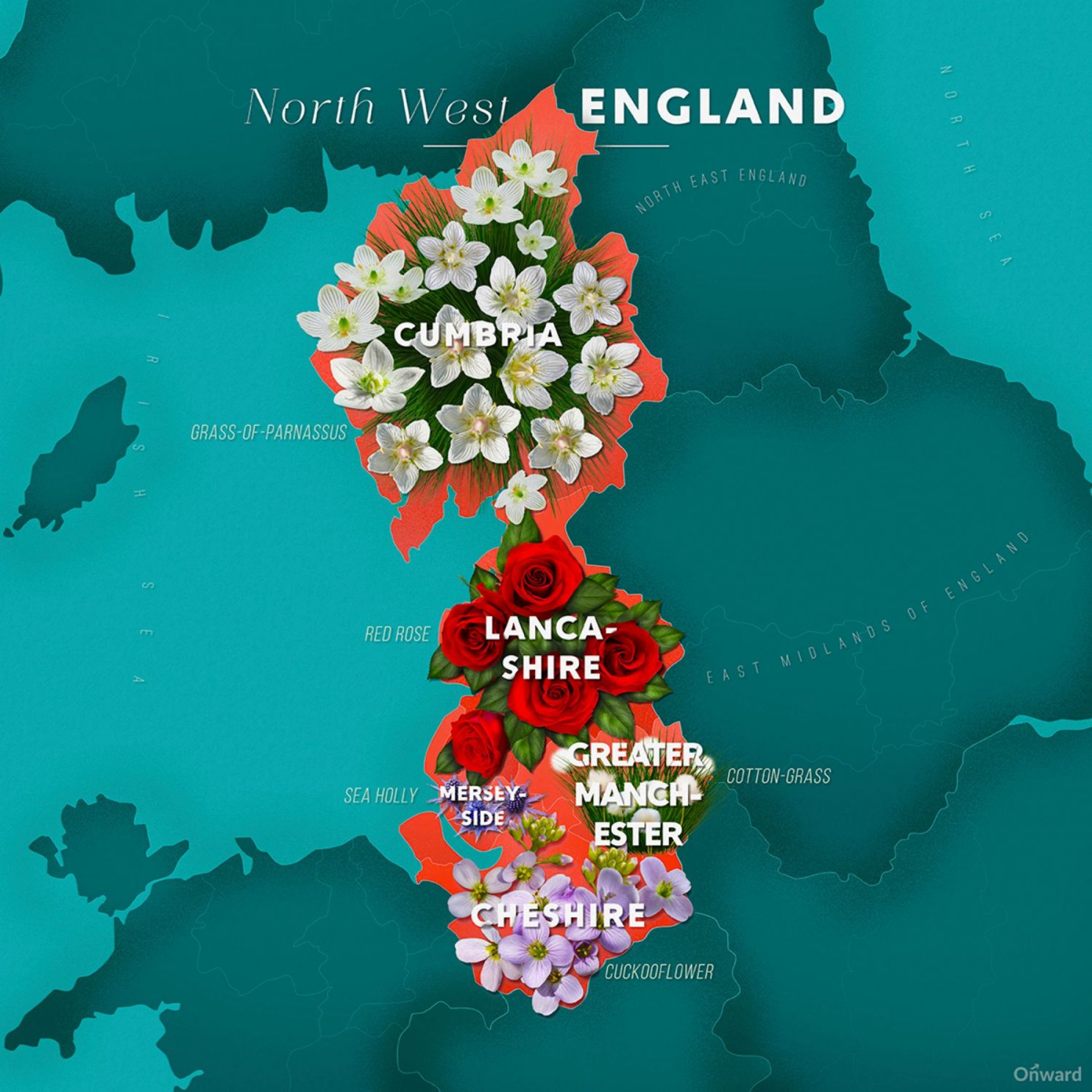 The Dog-rose (Rosa canina), adopted by Hampshire, has a rich cultural history in the UK. Celebrated by Shakespeare in A Midsummer Night’s Dream (back when it was known as eglantine), it also features in a folk riddle used to tell it apart from other flowers of its family: “On a summer’s day, in sultry weather/Five Brethren were born together/Two had beards and two had none/And the other had but half a one.” In other words, two of the dog-rose’s five sepals are whiskered, two are smooth, and one has follicles on just one side. 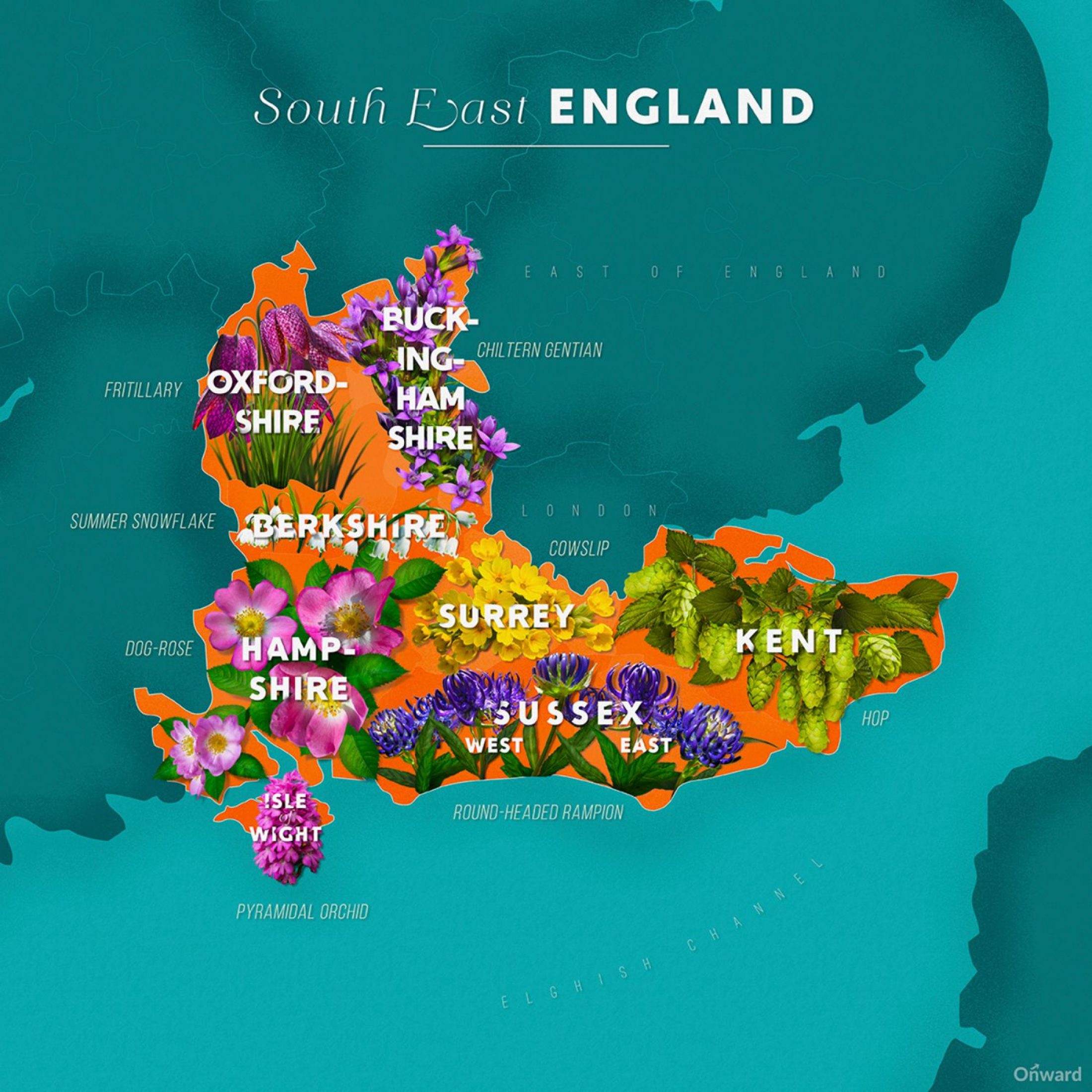 Primrose is another flower with special significance in the UK. Queen Victoria used to send bunches of them to British prime minister Benjamin Disraeli. They were his favourite, and the date of his death – 19 April – has become known as Primrose Day. It was also namechecked by Shakespeare, and has been chosen as Devon’s county flower, where it goes in abundance and signals the start of spring. While it remains stable at the moment, the primrose suffered in the heatwaves of the 1970s so the outlook for the flower as global warming advances is not favourable. 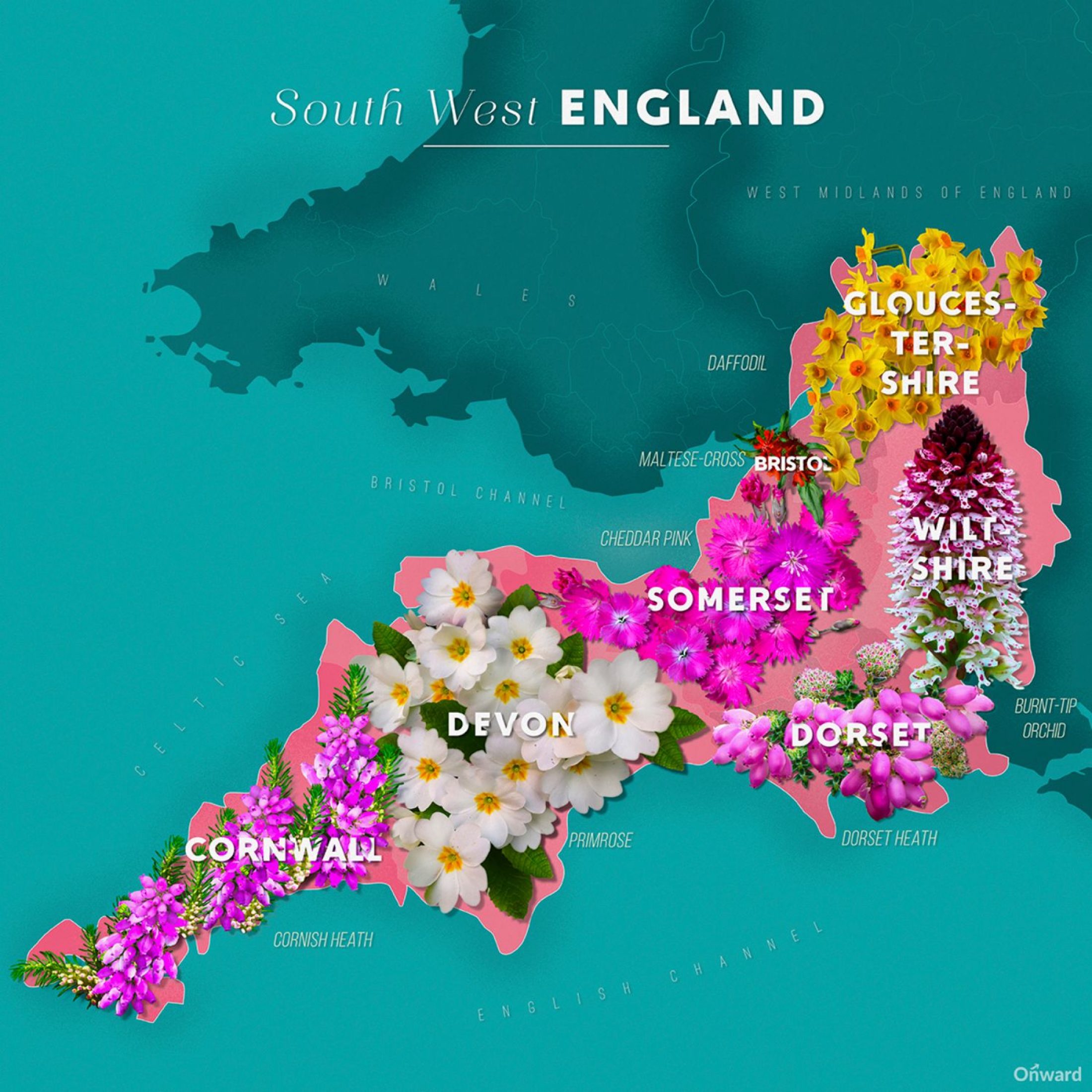 The Isle of Man

Fuchsia (Fuchsia magellanica) is a common sight among the hedges of Manx cottage gardens, where its prominence is guaranteed by the unlikely heights to which it grows. Despite being introduced to the island from South America as late as the 1820s, fuchsia is said to be to the Isle of Man as the rose is to England, the thistle to Scotland and the shamrock to Ireland. 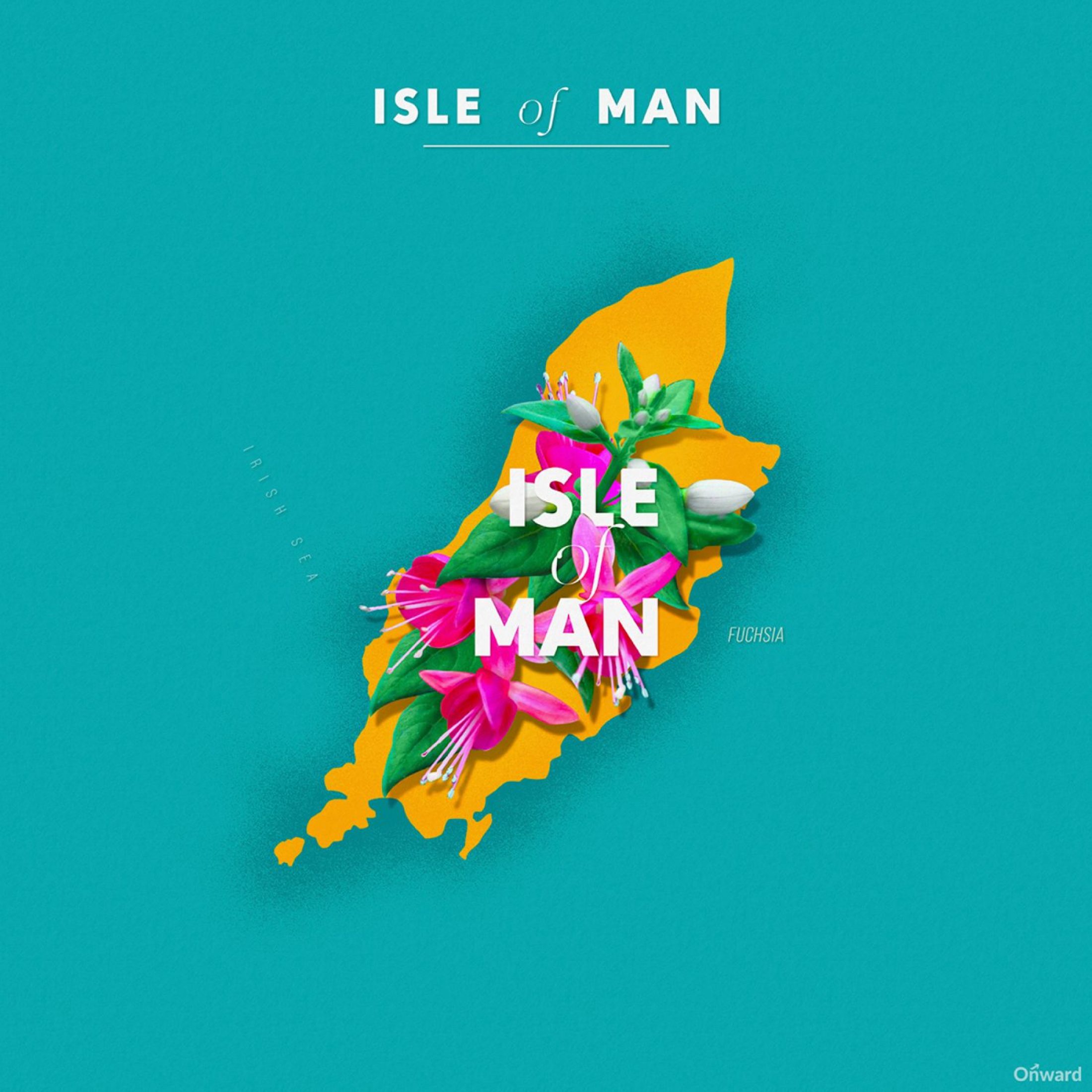 Mistletoe (Viscum album), is the stuff of stolen kisses at Christmas and the fertility rituals of ancient druids. Colonies of Herefordshire’s county flower are also the habitats for six insect species that can’t survive anywhere else. Sadly, this life-giving wildflower has a fight on its hands due to the loss of the apple orchards where it thrives. The less-welcoming Round-leaved sundew (Drosera rotundifolia) of neighbouring Shropshire is an alien-looking thing that traps and consumes insects with secretions of glues and acids from its martian-red tentacles. 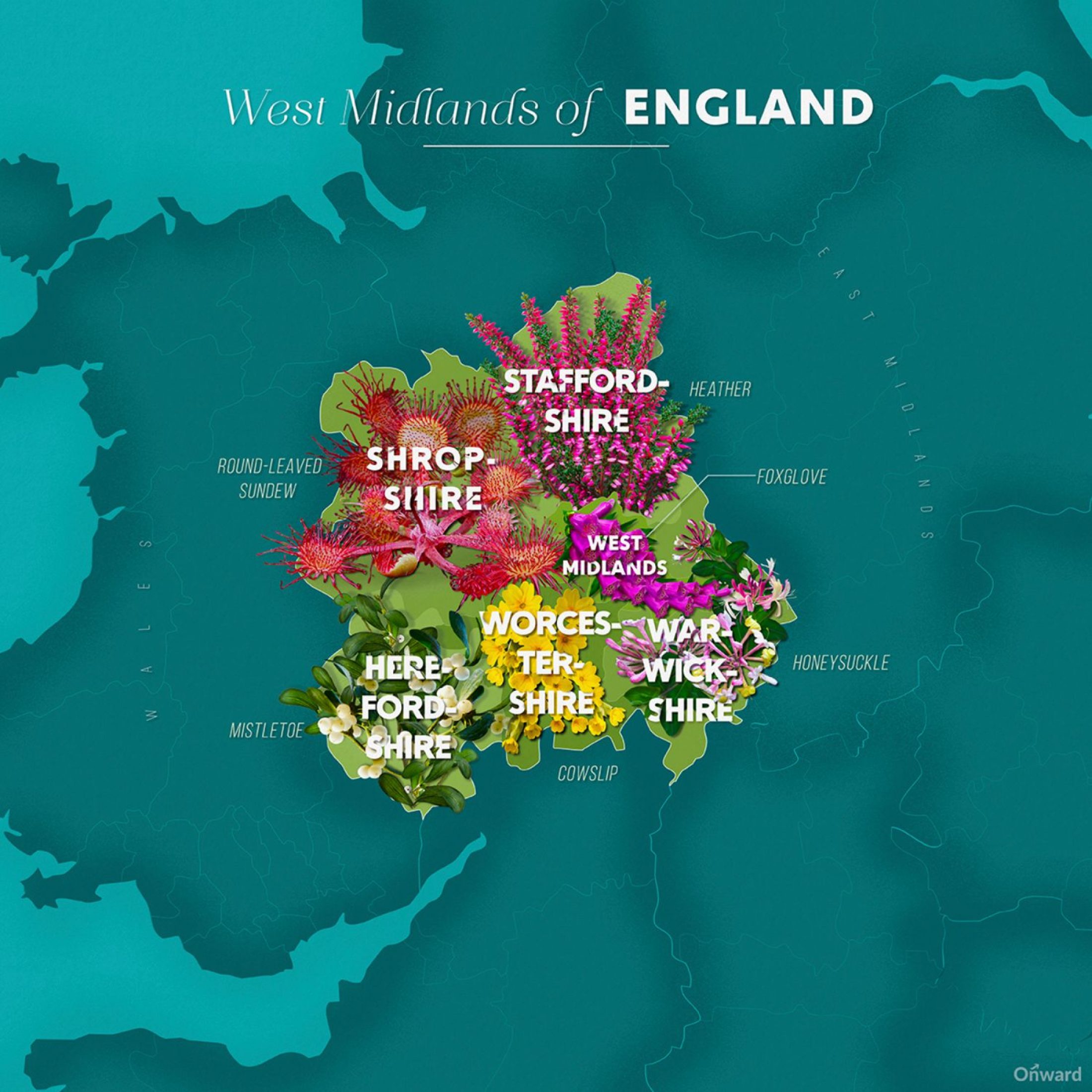 This region forms a white bouquet on the map, as its creators used poetic license to give the Yorkshire counties the shared county flower of the white rose. This was the heraldic rose of the House of York and has since become emblematic of the county as a whole. Its Christian connotations were of purity and joy, and the association became ingrained when House of York used it as a symbol during the Wars of the Roses. 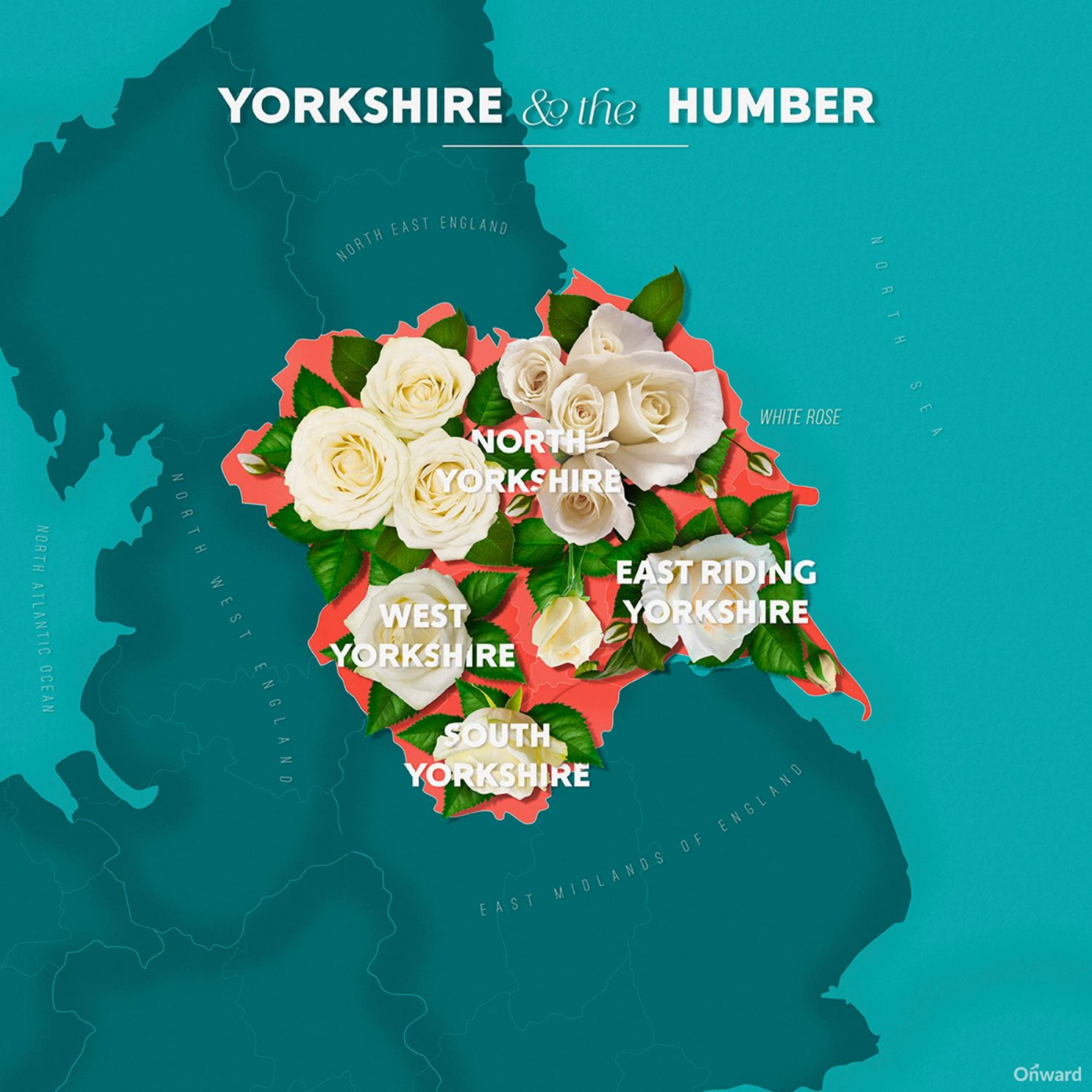 That white stripe across the top of Scotland is Grass-of-Parnassus – a symbol of cold and the the wilderness and wet. This honey-scented bog flower, county emblem of Sutherland, is doing well up north, but in decline in southern regions due to land drainage. Meanwhile, the foot of Scotland is a veritable bouquet due to its tightly-packed counties. Harebells (Dumfriesshire) and vivid Maiden Pinks (Roxburghshire) hide the presence of the secretive Cloudberry, emblem of Peeblesshire. Apparently, this shy and pretty plant is also known as the ‘nowtberry’ because, while it’s possible to make a marmalade of it, it tends to taste of ‘nowt!’ 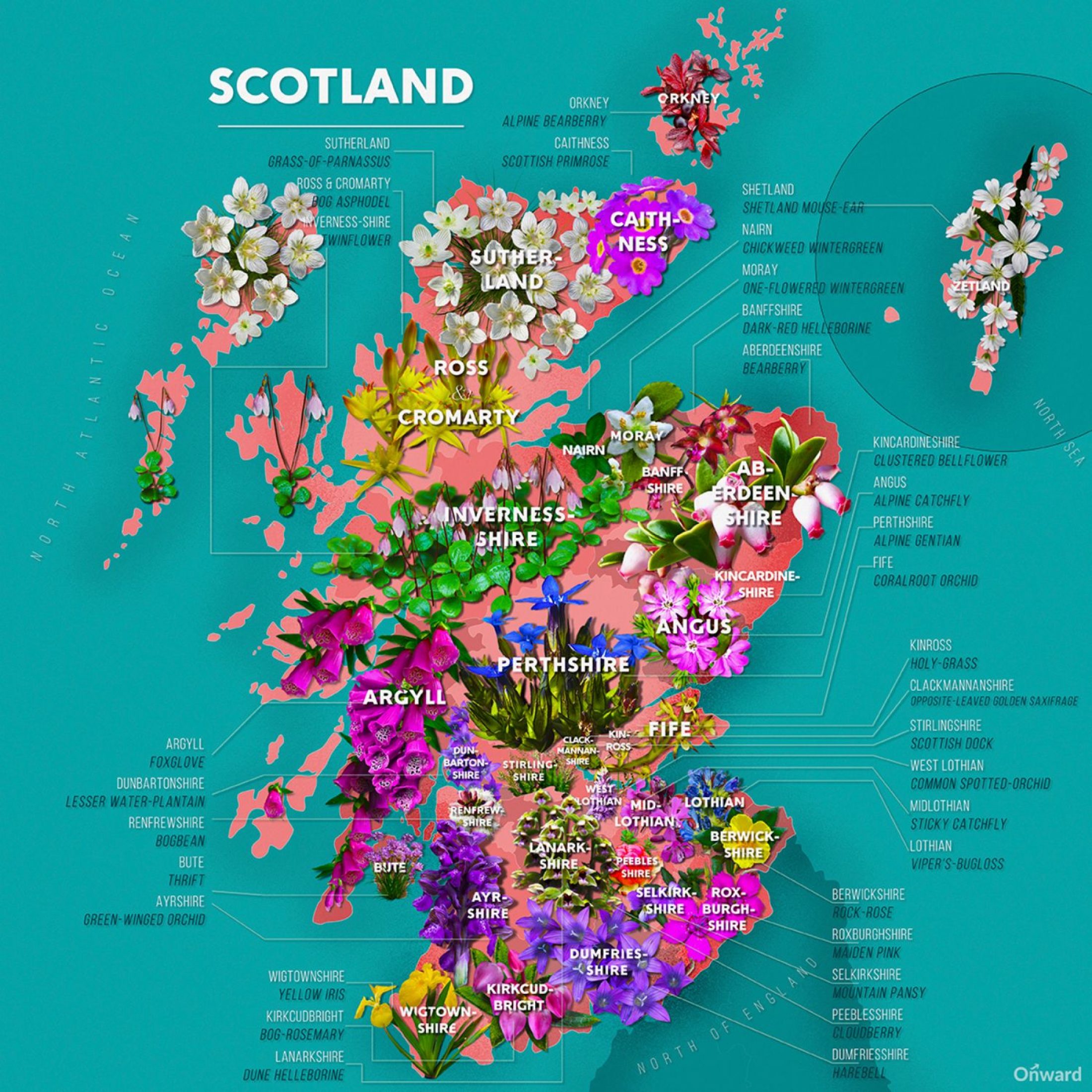 Naturally, the Welsh Poppy is a hit in Wales: it is the emblematic wildflower of the county of Merioneth, and beams yellow in contrast to its more commonly celebrated red cousin. The Welsh poppy is an inhabitant of the valleys and streams of its native land and is actually a closer relative of the blue poppies of the Himalayas than the red ones associated with the first world war. Yellow is a popular colour for the county flowers of Wales: see also the Radnor lily, which grows only in a secret location on a single hill in Radnorshire, and the incredibly rare Yellow Whitlow grass which grows on the rocks and cliffs of the Gower Peninsula in Glamorgan. 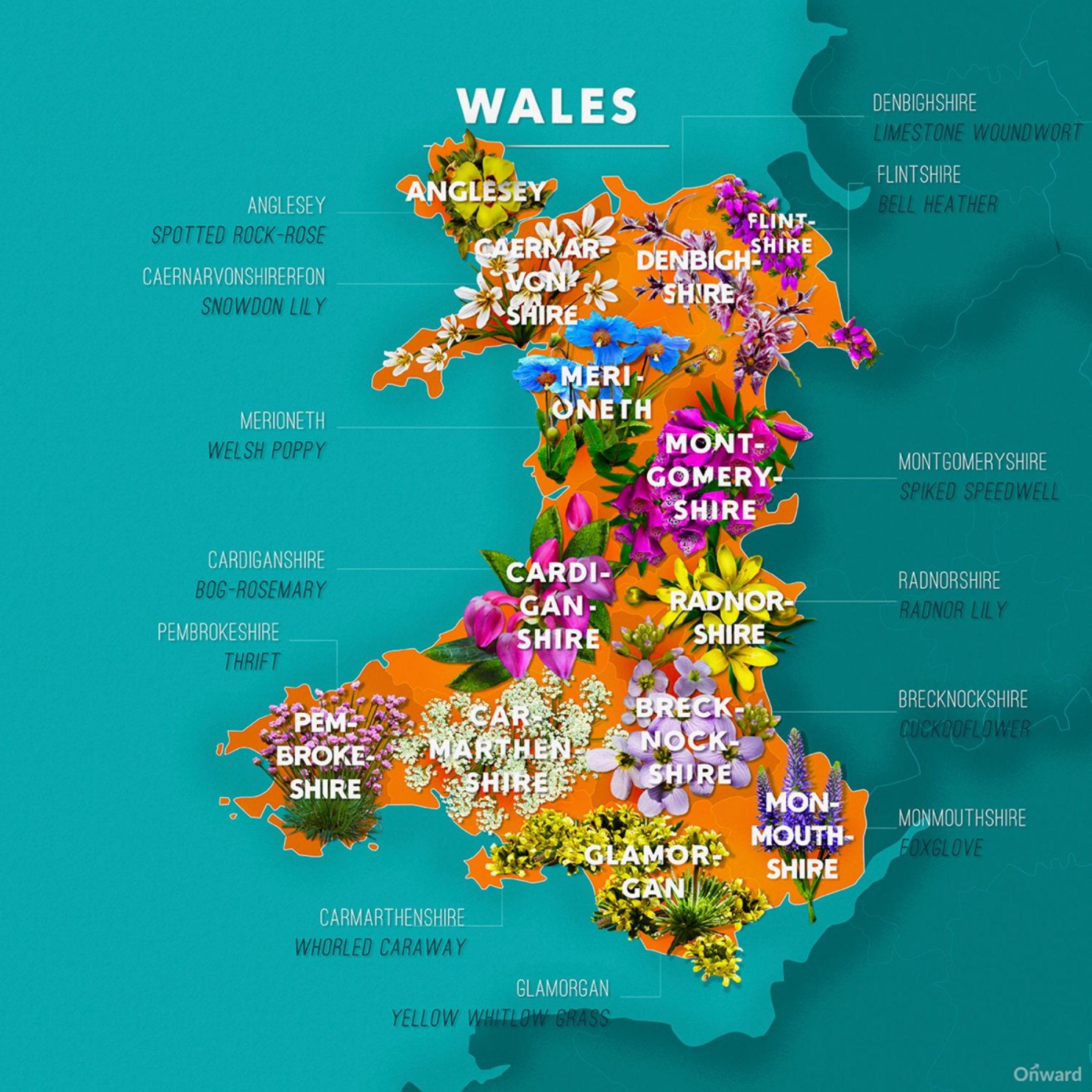 The beautiful thing about Purple saxifrage (Saxifraga oppositifolia), the county flower of Derry, is that it’s an early bloomer and blazes against the snow as it settles on the volcanic rocks of the Binevenagh cliffs. The popular Harebell (Campanula rotundifolia) that represents County Antrim was chosen for Dumfriesshire and Yorkshire too, perhaps due to its symbolic nature: delicate to look at but hardy by nature, these little blue gossamer bells symbolise childhood, grief, and humility. In Antrim, it’s thought of as a fairy plant, and nicknamed ‘the goblin’s thimble.’ 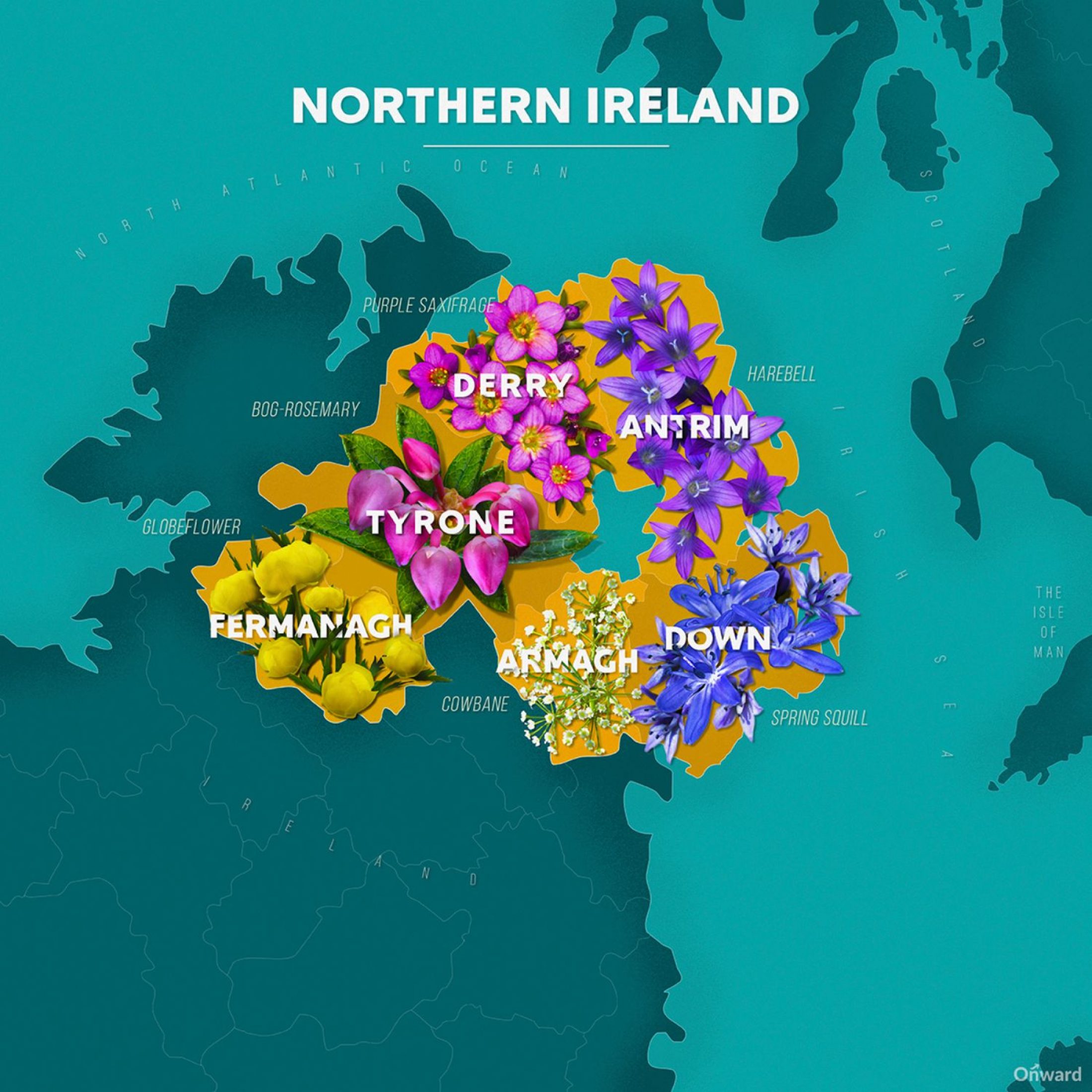 Designs by Jonny Addy and Povilas Daknys, originally for On Stride