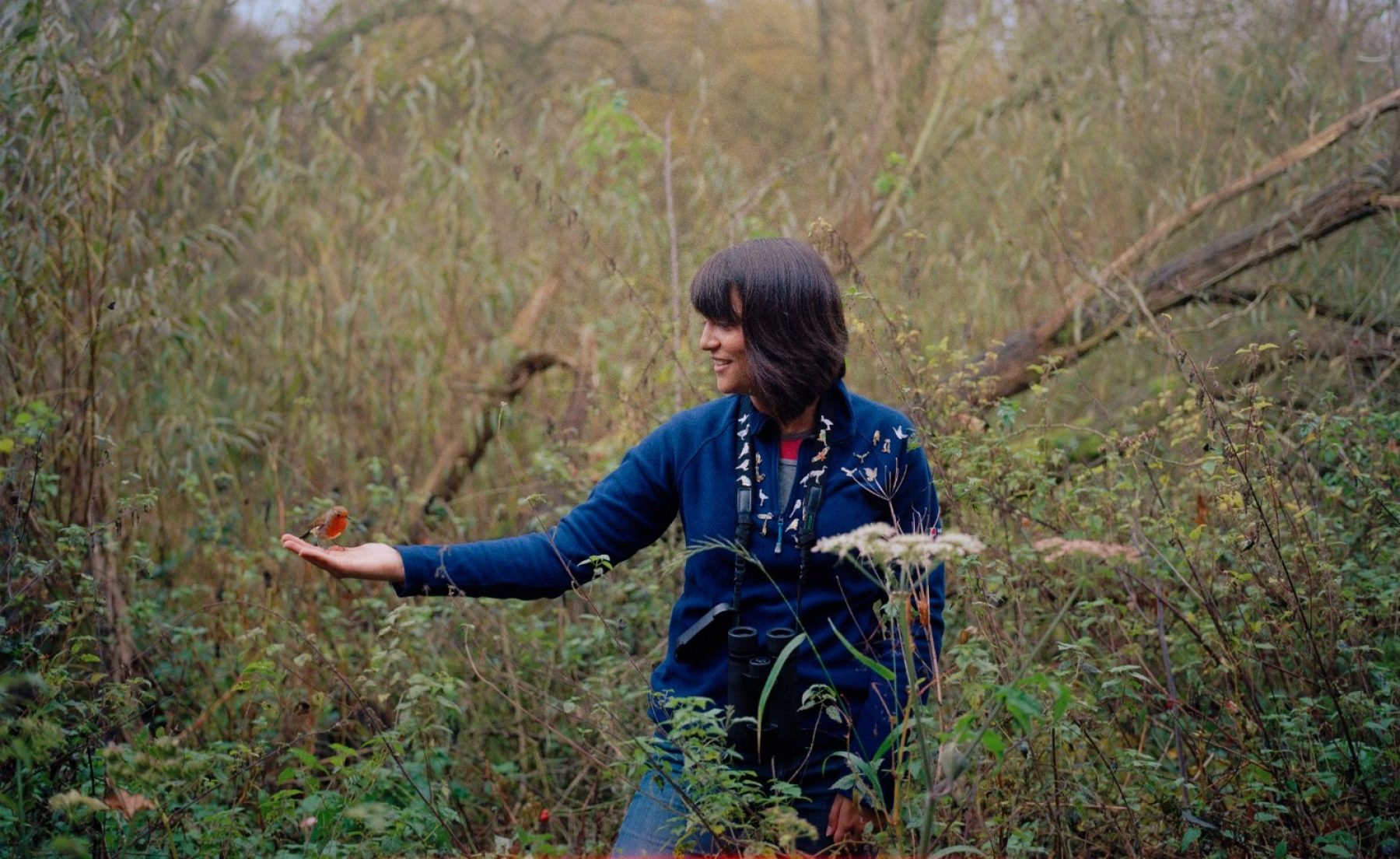 In our nature: the young conservationists

Much is made about young people disconnecting from nature, forgoing the outdoors in favour of TV screens and games consoles. But some are passionate advocates for the natural world. We meet four inspiring young people who are out in the field and on social media, giving nature a voice

Much is made about young people disconnecting from nature, forgoing the outdoors in favour of TV screens and games consoles. But some are passionate advocates for the natural world. We meet four inspiring young people who are out in the field and on social media, giving nature a voice Sorrel is also a keen artist and sketches and paints the wildlife she sees. Photographed by David Severn

“I love seeing animals and birds up close. It feels really special to look into the eyes of a creature, to share a moment. It was my grandparents that got me interested in nature. I remember trying to identify male and female blackbirds in their garden when I was small. They’d take me to nature reserves around the country and I’ve inherited their enthusiasm.

I’ve always been a birder mostly but I’ve started getting into moths, bees and dragonflies. And adore cetaceans: whales and dolphins. I was in Monterey Bay in California in the summer and about 2,000 long-beaked common dolphins came and surrounded the boat, as far as the eye could see. It was described as a mega pod. A humpback whale breached right next to the boat too. I won’t forget that for a long time.

It feels really special to look into the eyes of a creature, to share a moment

I’ve learned what to look and listen out for when I’m birding. Weather plays a big part, the direction of the wind as well. I love the seasons. It’s always exciting to see the first redwings and fieldfares  of the year, and I love hearing the warblers sing in spring. I think waders have loads of character and they’re often really nice to draw as well. I do watercolour paintings and pencil sketches: it’s a great way to learn birds’ characteristics.

It was so stressful during my A-levels and getting out in nature was great for head space.  I like cooking, walking and music too. I’d love to have a career in conservation. I’m going to The University of Edinburgh in September to do ecology and I’m using my gap year to get lots of experience, and to earn some money of course.

There’s a view that people my age spend too much time on their phones, but for me, my phone and technology are tools for capturing the moment and sharing it. There are definitely  lots of young people getting interested in nature and conservation.

It’s depressing to read stories about climate change and declining biodiversity, but it doesn’t make me want to give up, it makes me want to do something about it. Young people understand what’s going on and want to help the problems that maybe some older people have partly created. I want to enjoy what’s here and get other people enthused about it.” Zach with his moth trap in his garden. Photographed by David Severn

“When I was about eight, I saw a starling murmuration at RSPB Leighton Moss in Lancashire. There were thousands and thousands of birds in the sky. When one moved, all the others did too in a huge wave. I had to wait hours, but it was so beautiful it was definitely worth it. It reminded me of fireworks.

My parents have always taken me out into nature – including in a backpack before I was able to walk. I love birds, owls and raptors (birds of prey), and insects and moths too.

Most weekends in the summer, I’ll put my moth trap out. There are so many types, shapes and sizes of moths it would take a lifetime to identify all  of them. I love the hummingbird hawk moths – they’re huge and so interesting.

I had to wait hours, but it was so beautiful it was definitely worth it. It reminded me of fireworks

Raptors and owls are also huge,  but can have amazing grace in the air. They’re majestic, but savage when they’re hunting. One of my favourite insects is the bloody-nosed beetle. It’s called that because it releases a red fluid out of its nose to ward off predators when it gets scared or nervous. Bloody-nosed beetles are flightless, with long legs and big feet, so it’s great to watch them stomping around.

My dream job would be a vet in endangered species at the Durrell Wildlife Park in Jersey. I visited the year before last and there were so many amazing species. It would be great to be able to care for them and be around them every day. When I’m outside, I feel really truly relaxed. I love listening to birdsong. I also love music – I play the drums, piano and ukulele.

Social media is important in spreading the word about conservation. Without Twitter and my blog, I wouldn’t be in contact with nearly as many people as I am. It’s great to chat to people who share my interests.

Is it true to say people my age aren’t interested in nature? I don’t think so. There’s definitely a need to get others my age engaged in conservation, but I think we can do it. It’s going to be up to my generation to look after the planet, so I try to get my friends to come on walks with me and get interested in saving species. If we get enough people into it – maybe we can do it.”

Zach blogs at www.yearofnature.blogspot.co.uk He tweets as @nerdboy386 Dara’s is a well-known voice in the campaign to protect birds of prey. Photographed by Ronan McGrade

“It was red kites that got me interested in birds of prey. My obsession with all birds came from that. When I was in England, I finally got to see a red kite for the first time. It was the most amazing feeling I’ve ever had – like seeing  a celebrity. I thought: ‘Oh my god, I’m actually seeing it!’ Birds are my celebrities.

I love hen harriers too. They seem like ghosts, don’t they? They vertically rise up, like magic.  I was obsessed with planes and aircraft before  I got into birds. Once I knew that the hen harrier plane was named after a bird, I just felt  a connection with it. And when I heard about how hen harriers are being shot and persecuted, I wanted to protect them. I campaign about the persecution of raptors and I’m fundraising for a raptor project.

I’m always out in the garden watching birds. I like to go out with my camera and just wait.  I have Asperger syndrome and nature gives me a release from stress. I hardly ever feel relaxed but being outdoors calms me down.

When I heard about how hen harriers are being shot and persecuted, I wanted to protect them

One of my earliest memories is picking up feathers while walking along the Lagan river in Belfast with my family. From a young age, I’ve always loved collecting feathers, stones and shells. I have a huge collection. I also kept a nature journal, which later transformed into my online blog. I love writing about my experiences.

Some people think you need to go to faraway places – Africa or the Amazon – to see interesting wildlife, but you really don’t. You just need a garden, or a park, and a good book. I think it’s really important to celebrate local biodiversity: how can we protect lions or rhinos without having that same compassion for local species?

Once you become interested in nature and conservation, it becomes part of you. I don’t know yet if I’ll end up working in conservation, but it will always be in my heart, no matter what.” Mya-Rose, who is  half Bangladeshi, campaigns for race equality in conservation. Photographed by Rebecca Bernstein

“Knowing what we’ve done to the planet can be really difficult sometimes. The route I go down is to be relentlessly optimistic. Young people might not be popping down to the local nature reserve with a pair of binoculars all the time – our lives are very fast-paced, always moving on to the next project, homework, the next exam. But we do engage with nature in our own way. There’s a lot of love for the environment in people my age.

The best way to reach young people? I think social media is key, and straight-up education too. Young people aren’t really taught about the nuances of climate change, so might not know what’s going on unless they go on the internet and actively educate themselves. I was lucky because my family has always encouraged my interest in nature. I remember going twitching when I was three!

My favourite species globally is hummingbirds. I first saw one when I was eight and have always loved them. They’re so beautiful with their jewel tones. I saw a stunning sword-billed hummingbird in Ecuador. I’ve been lucky enough to visit about 30 countries, mainly through birding. I’ve seen spoon-billed sandpipers in Bangladesh. They’re critically endangered so it was incredible to see them.

Social media’s brilliant because it gives me  a platform to speak about things I care about.  I talk a lot about race equality in nature. I’m half Bangladeshi – I’m not white – which already makes me slightly different from the 99 per cent of people who go out and enjoy nature.

I think a lot of BME people living in cities feel that the countryside is a ‘white’ place that isn’t really meant for them. So I’m trying to challenge this, and get the subject spoken about a lot more. In the summer, I’ll be running camps to get some inner-city kids out into the countryside.

I do a lot of campaigning work but I have other interests too. I dance – ballet and modern – and I’m trying to learn guitar. I love everything about nature. I find the scientific side fascinating and I think it’s absolutely beautiful – from foxes in urban areas in the UK to birds in the Amazon rainforest.”