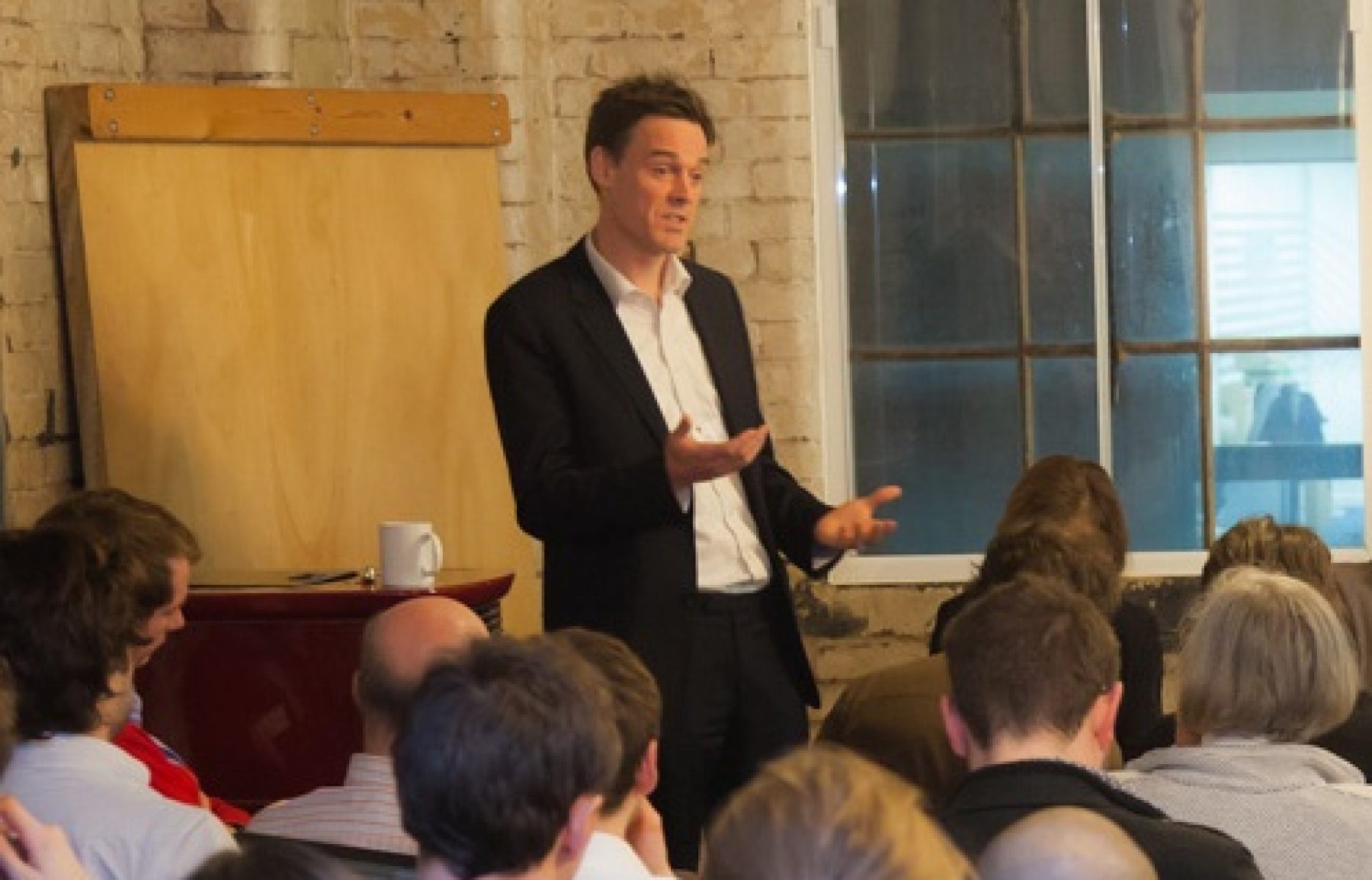 Can the people power Britain?

Locally-owned renewable energy projects offer more than just clean energy; they could be a practical route to empowering people and nurturing their wellbeing, believes Matt Mellen. He sits in on a public event to hear local energy innovators share their experience

Locally-owned renewable energy projects offer more than just clean energy; they could be a practical route to empowering people and nurturing their wellbeing, believes Matt Mellen. He sits in on a public event to hear local energy innovators share their experience

About ten years ago I joined around 50 others to help design a new kind of collaborative workspace. We drew chalk lines on the floor of a drafty, empty warehouse in London, imagining what configuration of people and furniture would best brew-up creativity and community.

We had no idea that the seed being planted at Hub Islington, would cascade into a global phenomenon. Today there are 35 workspaces in the Hub network on five continents, incubating 7,000 social entrepreneurs, collaborating to create businesses that have a positive impact on society.

I work in the newest London Hub, in Westminster – which looks more like a Google office than the wooden beamed space in Islington – but returned to the original Hub on Tuesday night for the launch of Hub Eco Series, a series of events aiming to create a positive debate around key environmental issues.

It was good to be back – seventy renewable energy enthusiasts turned up for the sold-out event to find out why six international corporations control 99% of the UK’s energy supply and what can be done about it.

Up front in the hot seats: Clare Hierons, CEO of Carbon Leapforg; Nigel Farren of Energise Barnet; Agamemnon Otero of Brixton Energy, and Howard Johns, managing director of Southern Solar. The panel was tasked with discussing whether community-owned, green energy cooperatives can be part of the solution to the UK’s energy challenge.

“Local energy co-ops may seem radical and niche, but this movement could be about to explode into the mainstream”

It wasn’t much of a debate but we were hearing fascinating tales from the front line. These battle-hardened veterans had gone head-to-head with energy mega corps and the labyrinthine regulatory regimes that surround them, emerging from the other side invigorated and keen to tell their stories.

Right now, local energy co-ops may seem radical and niche, but there are three reasons that this movement could be about to explode into the mainstream.

Firstly, it works well in other countries. Secondly, the benefits go way beyond the limitless clean energy they provide. Thirdly, because the success of the initiatives like the Hub network blaze a trail: the change we need to see in the world is not corporate or government led, it is going to be you and me.

Many of our European neighbours generate electricity very differently. Not only is the energy mix of Scandinavia and Germany more renewable, citizens own a significant proportion of the windmills, solar panels and other infrastructure that generate it.

Perhaps not surprisingly, these countries score better on national wellbeing scales and are more equal, showing less income disparity. They show that there is a range of benefits to dispersed energy generation beyond the simple fact that renewables won’t run out.

Agamemnon Otero quoted a recent study that conservatively estimates that the total community energy market for Great Britain is estimated to be around 3.5GW – the equivalent of about seven small nuclear power stations – but he pointed out, “what we are really after is wellbeing for communities.”

When he successfully transformed unused space on south London council estate roofs into a local power station, it wasn’t the flow of electrons or pounds that got him excited, it was the opportunity that the project provided the residents. Kids on the estate were trained up to understand the IT, technology and finance to keep the business functioning.

The knowledge and skills learned can lead to work, but it’s more than that; the project creates value locally. Otero was keen to point out that the kids don’t want a ticket out, they just want to be empowered. These projects generate electricity and cash to invest locally but they energise residents keen to “up-skill, re-skill and power down,” he explained.

“These projects generate electricity and cash to invest locally, and they also energise residents”

The current public dialogue around energy supply in the UK disturbs Howard Johns. The media presents two options: nuclear and fracking, or renewables. It completely misses the more interesting debate about who owns and controls what, he believes.

Howard reeled off ingenious case studies from around the world including district heating by solar thermal in Sweden, the hero who took a Bavarian village off-grid who is now tasked with doing the same with Berlin, and a Canadian development that pumps solar thermal heat into a borehole in the summer sufficient to heat whole neighborhoods for the entire winter.

Howard sees the shift to decentralised energy generation as the unravelling of the business model of the big six. He wants the speed of local generation to accelerate so that literal and metaphorical power comes back to citizens from corporations.

He asks how to engage people to move their money from lacklustre financial mega-corps to energy co-ops. No surprise that leaders from the renewable energy crowdfunding platforms designed to do just that, such as Abundance and Trillion Fund, were in the audience nodding their approval.

But challenges abound. Government changes to the Feed-in Tariff have left communities wanting to develop local renewable energy projects vulnerable to a dip in the price of the electricity they sell back to the grid. Attempting to generate electricity as a community, rather than paying inflated prices to fossil fuel burning corporations is rebellious and risky. It requires what Clare Hierons describes as wilful individuals to pull together community groups and cash, and stir in grit and determination.

The odds seem stacked against these groups until we start to see the benefits reaped by the communities that succeed: not just clean, limitless energy and a revenue stream, but opportunity, independence, creativity, resilience and the realisation of fundamental needs not satisfied by centralised economies.

The question for discussion was can local co-operatives respond to the energy challenge, but I left seeing it the other way around. The energy challenge we all face of rising fuel bills, climate change and lack of self-determination can become the catalyst for neighbours to start talking again.

When we realise that by pooling our money and working together we can get cheaper electricity, the fun is only just beginning. The real magic is breaking free from economic systems that lock us into to a lifetime of servitude to pay off debt we didn’t create. By having our own local energy generation we achieve traction towards more empowered lives and regain our dignity. We are Brits goddamit… let’s power ourselves!