Breaking the ice: how the Arctic 30 revitalised activism

When Greenpeace activists were detained in Russia following a peaceful protest in the Arctic Sea, their plight drew the world’s attention. Lucy Purdy explores how their ordeal galvanised campaigners and may have ushered in a new era for environmental activism

There aren’t many people who can say they’re proud to have been thrown into a Russian jail, but Frank Hewetson is one of them. The wiry, 45-year-old veteran Greenpeace logistics co-ordinator casts troubled eyes downwards when he remembers hearing the sobs of his teenage daughter, Nell, over the crackly line of a Soviet-era prison phone. But he’s unable to repress a gleeful grin when he talks about the campaign that landed him behind bars.

Hewetson, a Londoner, was one of the ‘Arctic 30’, a group of 28 Greenpeace activists and two journalists who were arrested at gunpoint by masked Russian security agents in September 2013, while staging a peaceful protest against the efforts of the giant Russian energy corporation Gazprom, to start the Arctic’s first offshore oil rig.

The group’s 100-day ordeal, which saw activists threatened with piracy charges before finally being released in late December, drew comparisons to the 1985 Rainbow Warrior bombing. The media furore helped make Greenpeace’s Save The Arctic campaign one of the most successful in the organisation’s 42-year history, sparking more than 800 protests in 46 countries, netting 5m petition signatures, and triggering a surge in new memberships and donations. Greenpeace says around half of all protesters mobilised worldwide were taking action for the first time and describes the scrutiny focused on oil companies since the Arctic 30 were imprisoned in the frozen city of Murmansk, as “unprecedented”.

Speaking to Positive News days after Royal Dutch Shell’s CEO Ben van Beurden announced the firm would not attempt to drill in the Alaskan Arctic this year, Hewetson said the campaign succeeded beyond his wildest dreams: “There were difficult moments in incarceration – a whole period of doubt and darkness – but I never once regretted it. What we went through revitalised the organisation and repositioned Greenpeace, particularly with a view to the effectiveness of direct action.”

“There was no particular genius to it, no highfalutin media guru who came along and told us what to do. I think it worked because we suffered and because Greenpeace communicated that well. People recognised how strongly we felt about our cause and respected that we suffered for it with pride and dignity,” he adds.

The campaign seemed to explode the prevailing sense of corporate inevitability, Hewetson says, disrupting a narrative that said the removal of Arctic oil was bound to happen, and giving renewed hope to activists around the world.

That shows the power of direct action, says Charlie Kronick, a senior climate advisor at Greenpeace. “Direct action is successful because it isolates a moment in time, allows you to document it, bear witness to it, ask people to reflect upon it, and change can happen as a result,” he says. Still, he adds, it’s important to blend the power of direct action with more measured outreach aimed at changing corporations from within. “The wider environmental activism community is now seeing that a more holistic view is how to change these institutions,” he says.

That shift now sees Kronick head regularly to the City of London and Wall Street to engage directly with top financial and corporate decision-makers. There, he seeks to appeal less to hearts and minds than to bottom lines and balance sheets in order to bring about change.

“What shareholders and companies saw with the Arctic 30 is that it was a nightmare for Gazprom, environmentally, politically, reputationally. It spoke directly to that business and financial community.”

The aim is to use the Gazprom episode to tarnish Arctic drilling more generally, and to convince investors that the pursuit of Arctic oil is a sign that fossil fuel companies are no longer a sound investment. “What we try to convey is the reality that the move of oil companies to the Arctic is an indicator of just how desperate they are – that this really is an endgame,” Kronick explains.

And what of those dubbed ‘armchair activists’; people who would not dream of setting sail into the Russian wilderness but who sign petitions, donate money, write, shout and click their support. Do they still have a role in environmental activism?

“Individual actions are certainly not futile, but they don’t leverage systemic change,” Kronick says. “For better or worse, markets are the most powerful places on Earth, and so if you want to change the world, you have to change the markets. What individual action provides [is] legitimacy to the bigger ask. It says: ‘We’re mandating you to make the systemic changes.’

“The key for the environmental movement’s future will be to build realistic, savvy campaigns that combine direct action with more systemic, investor-focused campaigning”

“I don’t think clicking ‘Like’ on Facebook changes anything, apart from the number of likes. But social media is an incredibly powerful tool. Before, people had to be pretty committed to even hear about these things, let alone act on them. We now have a great opportunity to widen our audience,” Kronick says. “If it stopped with a click, there would be a legitimate question. But in fact, we see that social media engagement translates at a surprisingly high rate from an online relationship to a real-world relationship.”

The Arctic organisers’ ability to muster an international network of supporters behind a small group of real-world campaigners showed the extent to which well-managed local campaigns can now take on global significance. “The movement has always realised that the environment is ‘about everything’. But this frames the discussion much more now: that you can’t separate out what happens in the far north Arctic to what’s happening here, wherever here is for you,” Kronick says. “What we’re doing now might not be as pure as in the early days of Greenpeace, but it’s certainly not naive.”

And if campaigners’ methods have evolved, so too has their message. Most environmental activism used to be based on the presumption that people failed to act due to insufficient understanding, explains Kronick. “The evidence now shows that knowing something is wrong doesn’t make people stop doing it. But knowing that something is right or that it benefits them is much more motivating.”

That’s leading campaigners to strike a more upbeat note, and to seek to emphasise positive action. Hewetson laughingly mentions a 2007 Greenpeace banner, unfurled to celebrate the Eurostar high-speed rail link to Europe, which was the organisation’s first to contain the word “yes” – in three metre high letters, no less.

It isn’t always easy to be that positive, Hewetson admits, since environmental protestors tend to focus on groups that are getting things wrong. “We’re in the business … of selling bad news, which is difficult.”

Still, there’s a fundamental optimism to all serious environmental activism. “What you have to prove is that it’s not too late to try, otherwise it’s time to give up and hand over to the cockroaches,” Hewetson says. That’s the real message of the Arctic 30, he believes: that it’s possible to stand up, to speak out, and to take meaningful action in the face of “clear and evident moral wrongs,” such as Arctic drilling.

“It’s possible to stand up, speak out, and take meaningful action in the face of clear and evident moral wrongs, such as Arctic drilling”

The campaign will long be remembered as one of the most significant protests of its time, says Hewetson, whose own eco-activism was inspired by the likes of late Nigerian environmental campaigner Ken Saro-Wiwa, and by Greenpeace’s 1995 Brent Spar protests (when activists occupied a retired North Sea oil storage buoy for more than three weeks, to protest against Shell’s plan to dispose of it at sea).

For the thousands who supported him and his colleagues throughout their ordeal in Russia, seeing somebody take action – and triumph – on their behalf is both a form of vicarious activism, and a strong motivator that Hewetson hopes will drive others to make a stand. “With the catastrophes that seem to be on the horizon given our ever-expanding love for fossil fuels, I can’t see activism going away. I think if anything, more people will become activists, and probably in different ways,” he says.

For his part, Hewetson remains thrilled to have been one of the Arctic 30. “I’m so proud of the team. We stuck together emotionally, morally and spiritually, on the boat and in prison. I wouldn’t change my involvement for the world.”

The impact of the Arctic 30 Bill McKibben, founder, 350.org:
“It’s a reminder of the real courage involved in this work sometimes. The rest of us look on with awe at the sacrifice and commitment of the Arctic 30 – and the way they made the degradation of the far north a front page item around the world.” Paul Brown, co-editor, Climate News Network:
“[It] was an enormous success in focusing attention on the Arctic. The best campaigns combine inventive frontline protest, like scaling power stations and oil platforms, with scientific briefings and back-up in the form of letter-writing and petitions. Never forget that after years of campaigning by Greenpeace in the Antarctic in the 1980s, it was the 5,000 individual letters from members of the Women’s Institutes protesting about the British government’s plans to mine there that changed Mrs Thatcher’s policy.” 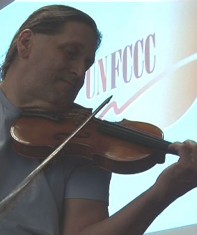 Aubrey Meyer, author, campaigner and musician:
“The effect of Arctic melt rates has been a drastic wake-up call to the world … Global carbon budgeting is necessary and requires immediate international agreement to stop this catastrophic process … To be effective, future activism must now openly embrace the ‘contraction and convergence’ rationale.” Alex Harris, Arctic 30 campaigner:
“It was the response led by the whole organisation during our imprisonment to fight for our freedom that made the Arctic 30 so big. I hope it has shown the world that big things can happen when a group of people who share the same values and have a passion to stand up for what they believe in come together. I spent 64 days in prison for a crime I didn’t commit. Undoubtedly they were the hardest days of my life but now the world is talking about Arctic oil and the threat it poses to our planet. That’s what kept me going in prison and made my time there worthwhile.  You don’t regret the things you do in life, only the things you didn’t do and I’m proud that I took a stand on something that I care about.”