In the Kenyan savannah, conservationists have joined forces with large tech companies in a bid to protect elephants from poachers. It’s just one way in which big data is being used to save threatened species, discovers Gavin Haines

In the Kenyan savannah, conservationists have joined forces with large tech companies in a bid to protect elephants from poachers. It’s just one way in which big data is being used to save threatened species, discovers Gavin Haines

Under the shade of an acacia tree, Bernard Lesirin and I watch a herd of elephants – ancient bulls, feisty teens and newborn babies – sweep through Kenya’s Samburu National Reserve. Some of the males are in ‘musth’, a period of heightened testosterone production, and start mounting the females.

“You don’t see mating often,” whispers Lesirin, who belongs to the Samburu tribe, from which the park takes its name. “You’re lucky.”

Lesirin is a guide for Save the Elephants (STE), which has a research centre in the reserve; a ramshackle facility where mud-brick buildings sprout from the dusty earth. I’m here to learn about the threats facing Africa’s elephants and the potential solutions to help bring numbers back from the brink. The statistics are sobering: STE estimates that the population of savannah elephants, the largest sub- species of elephant, has crashed from 1.3 million in 1969 to just 415,000 today.

Surprisingly, the mood at the camp is upbeat. “We anticipate the poaching crisis will end,” says Frank Pope, the charity’s chief operations officer, who cites China’s recent ban on ivory as a reason for optimism. “China has gone from being the biggest problem to one of the loudest voices against the ivory trade.”

Technology is also boosting the team. They use highly sophisticated tracking software, which comes courtesy of a partnership between STE and Vulcan, a Seattle-based investment company owned by Microsoft co-founder Paul Allen. The software provides real-time tracking data on tagged elephants, which is presented on a live map in an app.

Pope gives me a quick demonstration on his iPad and I watch as colourful elephant icons move across the screen, leaving squiggly trails behind them; migration data from the last few months, which Pope speeds up for effect.

Longer term, he explains, this data can be used to map migration routes – a vital part of the campaign to keep them open in the face of “elephant unfriendly” developments. “Kenya’s population is set to double by 2050. Major infrastructure projects are coming. This data is a powerful tool for policy-makers.”

The information also helps protect elephants from more immediate dangers. “If tagged elephants are heading into an area where we know poaching is a problem, we can get a ground unit out there to shepherd them through,” explains Pope.

And here’s where it gets really interesting: the tracking technology also monitors the behaviour of collared animals, using algorithms to analyse their every move. If these bots deem an elephant to be acting out of character – potentially a sign of distress – they will send an SMS to rangers, who can act accordingly.

“The wilderness is being wired up,” says STE intern Nelson Mwangi as he shows me a live map of tagged animals on an iPad. “It’s transformed the way we can protect elephants,” adds Pope. 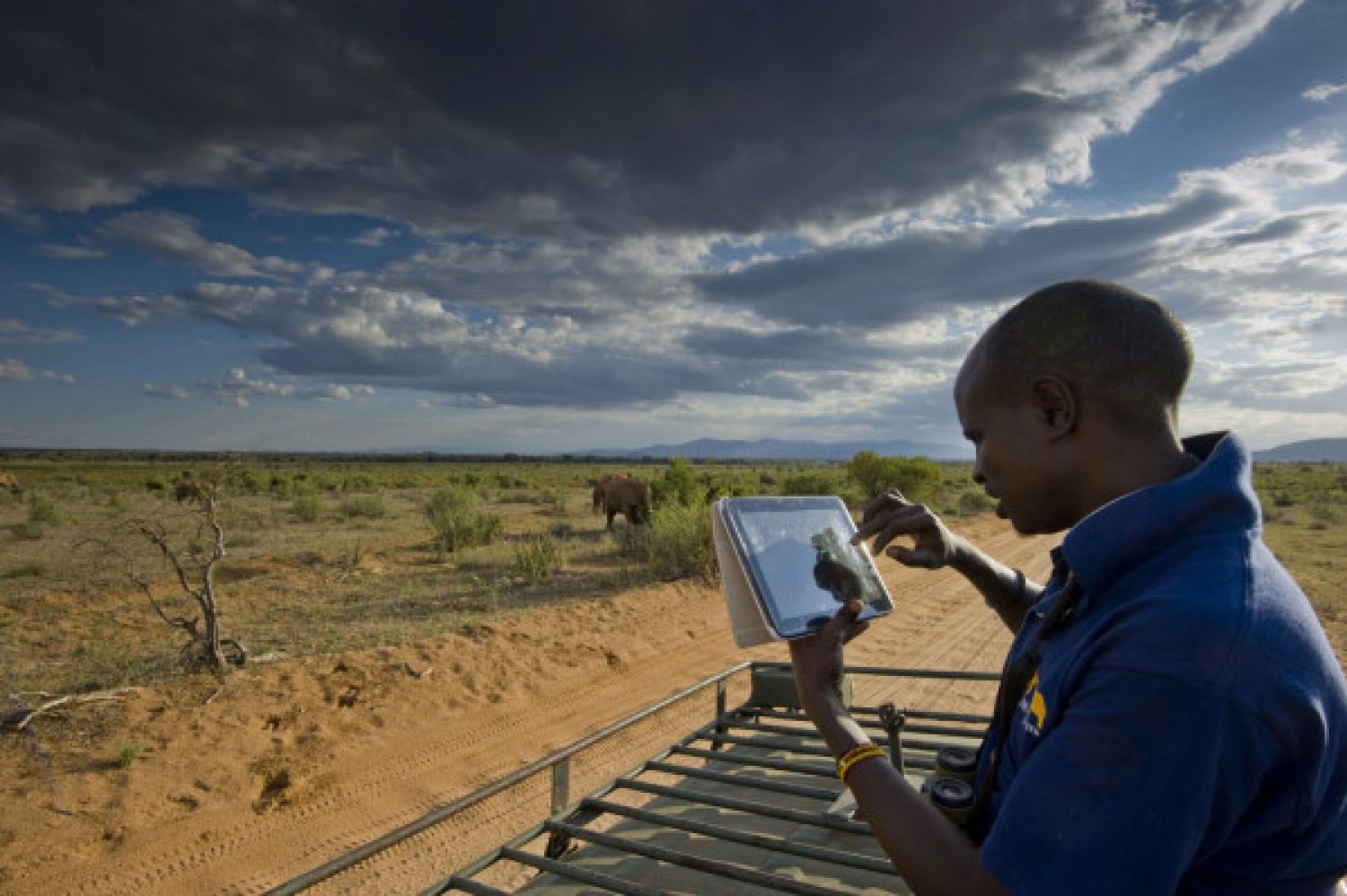 With the help of technology, the Samburu elephant population is one of the best studied in the world. Image: Frank af Petersens / Save the Elephants

In a 2015 paper, Technology for Nature Conservation, published by Springer Netherlands, Lucas Joppa – chief environmental scientist at Microsoft Research – wrote that “information age technology has the potential to change the game for conservation by continuously monitoring the pulse of the natural world.”

This process has certainly begun, but technology isn’t just being used to conserve the species at the forefront of public consciousness; it is also being used to help those with lower profiles, such as fish.

According to OceanMind, a non-profit organisation that works to make fishing more sustainable, nearly a third of global fish stocks are being exploited at unsustainable levels, with severe consequences for the marine environment.

Those responsible often get away with it, because policing the seas is notoriously tricky work. Just ask Peter Horn, who manages the Pew Trusts’ Ending Illegal Fishing Project. Part of Horn’s remit is to prevent illegal fishing in the newly created marine reserve surrounding the Pitcairn Islands, a remote British overseas territory whose population descends from mutineers of HMS Bounty.

Working with Satellite Applications Catapult – a technology company based in Harwell, England – the team at Pew is able to correlate tracking data and satellite imagery to map the whereabouts of ships at sea. “We’ve been able to establish a fairly comprehensive satellite surveillance of the Pitcairn Islands,” says Horn. “In doing so, we are able to highlight infringements to the UK Foreign Office and let fishermen know that we’re watching them.”

It appears to be yielding results. “We now see fishing vessels taking an obvious detour around the protected area,” says Horn. 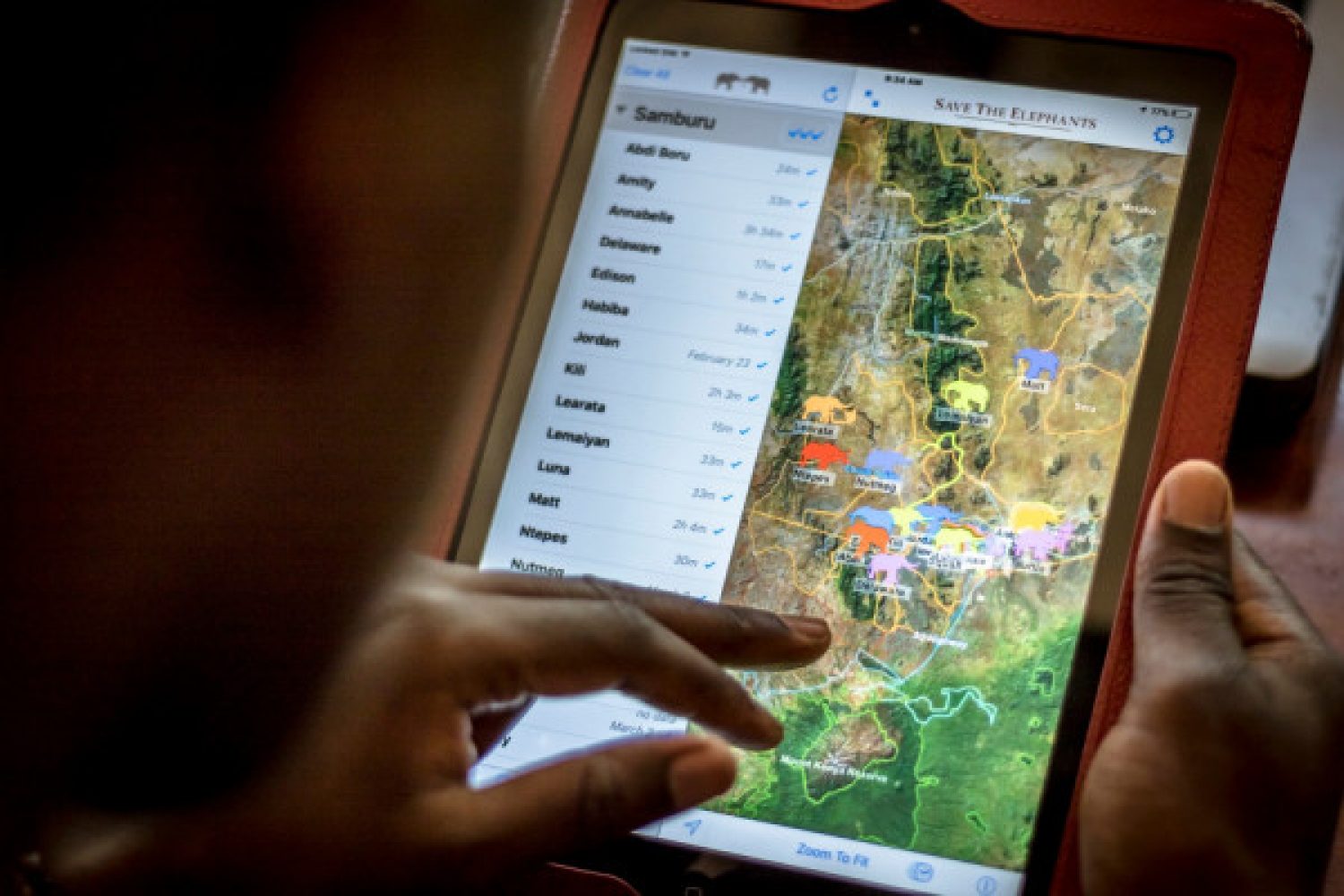 The software gives real-time tracking data about tagged elephants, presented on a live map in an app. Image: Save the Elephants

Surveillance technology is also being used to monitor Amazon river dolphins, which are classified by the International Union for Conservation using the ominous label of ‘data deficient’. Campaigning to protect a species that you know little about? Clearly a pretty challenging task.

To help fill in the gaps, a team at WWF Brazil – with the help of scientists at the Mamirauá Institute in the remote Amazonian town of Tefé – is using drones to gather much-needed information on these fascinating dolphins. It couldn’t come soon enough: their habitat is becoming increasingly fragmented by dams. When time is of the essence, drones help gather data much more quickly than traditional “mud on boots” fieldwork.

“Drones open up areas that we haven’t been able to reach before,” says Marcelo Oliveira, WWF senior programme officer for the Amazon. “Now, for the first time, we can discover the numbers and distribution of dolphins in inaccessible parts of the Amazon.”

Although technology is becoming cheaper and more widely accessible, it remains often prohibitively expensive. Joppa, the scientist at Microsoft Research, acknowledges this and claims conservation groups could pitch themselves as testbeds for consumer technology to avoid incurring the costs. “The industry can develop tomorrow’s consumer technologies by solving today’s nature conservation problems.”

Joppa also claims the true potential of technology will only be realised by a centralised “conservation community”. Creating this “presents one of the most fascinating challenges of our time,” he says.

However, it’s important to remember the limitations of technology. There is, for instance, no app for ending poverty, which is often what drives a poacher to pick up an AK47 rifle and set off into the savannah in the first place. Creating education and employment opportunities is the best way to tackle the vast majority of causes of wildlife crime, something that remains a huge challenge in much of the developing world.

Not all solutions are high-tech, either. Indeed, STE is championing another conservation initiative, which involves installing beehives along the boundaries of farmland.

“Elephants are terrified of bees,” says Saba Douglas-Hamilton, a director at STE and daughter of the charity’s founder, Iain. “You can use that fear to create bee barriers.”

In places where bee barriers have been installed, conflict between humans and elephants has reportedly fallen by 80 per cent; what’s more, the bees have also helped pollinate farmers’ crops. While tech offers intriguing possibilities, sometimes it’s the simple things that work best.