A helping hand for unlikely entrepreneurs

An innovative new venture is providing business support to micro-entrepreneurs from disadvantaged backgrounds. Claudia Cahalane goes along to a Common Cause event to see first-hand how it’s making a crucial difference

It’s an icy Saturday morning in February, but inside HUB Islington, several woodchip burners are alight, a hot drinks station clinks and dozens of people are buzzing about.

Around the room are 50 ‘micro-entrepreneurs’ hoping to get some gems of advice to take their ventures to the next level. Starting a business is a mammoth task even for people with a relatively comfortable lifestyle, but most here today are coming from a different starting position altogether.

Some have been homeless, some in gangs, others have been in prison. Some have had bouts of feeling suicidal, or been unemployed for long periods. They are now on a brighter path thanks to the likes of local councils, housing associations, the Aspire Foundation and an organisation borne out of Aspire called Enterprise CUBE. This morning they will get free help from experts in marketing, websites, social media, accountancy and legal issues, who have volunteered their time.

“On the course we’ve had badge-makers, a plumber, restaurateurs, designers, software designers. I’m always staggered when I do a programme; there are loads of new ideas, new energy, new creative people; it’s fantastic”

“I’m really excited. This is a major opportunity, because so many different people are all in one room offering advice that would cost a lot of money if I had to go elsewhere,” says Yvonne Gill, a 56-year-old who’s setting up a campaigning media company called Watergate Films.

Karen Snow, who volunteered at both Aspire and Enterprise CUBE, has put on today’s event to launch a website called Common Cause. The site is a platform for matching entrepreneurs, such as the ones here today, with experts willing to offer free advice, companies offering cheaper services and those wanting to give cash.

Today is a real-life taster of what the entrepreneurs might have more regular access to online. There are several film-makers here, chefs, sweet sellers, badge-makers and more.

Turning passion and skills into a business

The story of Jamilia Zukaitiene, a 45-year-old knitter, stands out. In her early 40s she found herself homeless in Hampstead Heath, before Camden council helped her find somewhere to live. Her support worker noticed her knitting skills and encouraged her to make more of them through a business course with the Aspire Foundation, and she subsequently launched her own knitwear company, Jamilia Designs. 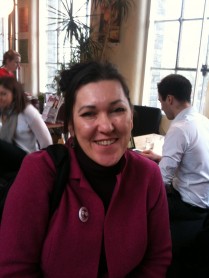 While she is finding the current economic climate tough, Zukaitiene says she is hugely grateful for the ongoing support she is getting. And, promisingly, is also down to the last five people in a competition run by Stanford University to launch designers using social media. If she’s successful, her designs could be produced on a much larger scale.

While I’m chatting to Zukaitiene I can see another entrepreneur keen to spread the word about his business. Manzoor Ahmed, 53, is queuing to have his photo taken for the Common Cause website, but grabs my attention. He is setting up a catering business called Fusion Foods and also wants to use his cooking skills to train young people in basic kitchen skills, he tells me.

“I’ve been unemployed two years end of this week,” he says. “I used to work in social housing and got made redundant. I’ve been cooking for large groups of people for free since I was 19, so I thought about running my own catering company and last year I did my training course with the Aspire Foundation.”

He needs to do more work on marketing and fundraising to get his business flying and has had great advice in these areas today, he says.

Ahmed, like most of the entrepreneurs at the event, comes across as extremely upbeat. “I feel positive,” he says. “I always have done, even when I was made redundant. If I don’t have something, I will find something. I want to be successful, not financially, but in the way that I am noticed and appreciated for the service I can offer to unemployed young people.”

Perhaps one of the most unique businesses and heartwarming stories here is of a different kind of chef – Sauro Liverani. A few years ago he was not working and was living alone in London, regularly feeling suicidal. Getting a dog changed everything, he says. He went from frequent hospital stays to being comfortable at home and, in particular, Liverani enjoyed using his cooking skills to feed Caspar the dog home-cooked meals. 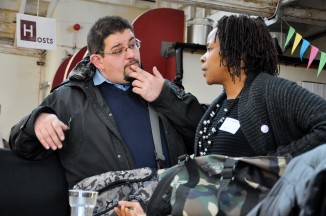 He now runs his own small business, Delicious for Dogs, selling real dog food and organic dog snacks to customers, and even lists a few celebrities among his clients. “I use real meat, flour, cheese, vegetables; everything is fresh,” says Liverani. “I’ve been doing it a year now and it’s going very well. I’m here today for moral support; with my depression it’s sometimes difficult to communicate, but the course gives me a push of confidence.”

Liverani began his business after Paul Funnell and Richard Lanning, founders of Enterprise CUBE, visited the housing association where he lives, to find people with business ideas. “Pretty much everyone we deal with is starting a business on a shoe string; they literally have nothing,” says Funnell. “We’ve worked with people from the homeless sector, ex-offenders, ex-gang members and often with a lot of people from social housing. We’ve had all sorts of businesses.

“One woman in Borehamwood was a housewife and wanted to work part-time to fit in with school hours. She started a gardening business that was quickly inundated with work. It wasn’t long before she rang me saying she’d been offered a £74,000 contract and wanted advice on whether she needed to be VAT registered.

“On the course we’ve had badge-makers, a plumber, restaurateurs, designers, software designers. I’m always staggered when I do a programme; there are loads of new ideas, new energy, new creative people; it’s fantastic.”

Providing support at the grassroots level

Event organiser Karen Snow came up with the idea for Common Cause after working in poverty alleviation in South African townships. She was incredibly touched by the hard work done on launching initiatives by those who’d been in extreme circumstances, but in general she noticed that support systems for such people, across the world, were lacking.

“I saw there was nothing for those at the grassroots to do things for themselves. We have big institutions and governments, but they only offer a partial solution,” says Snow.

“The micro-entrepreneurs have been lit up. They’ve made progress and got answers to questions that were holding them back, and they’ve gained more confidence, which is such a big thing”

“It’s been a tremendous day,” she says, as the morning comes to a close. “The volunteers have been lit up, the micro-entrepreneurs have been lit up. They’ve made progress and got answers to questions that were holding them back, and they’ve gained more confidence, which is such a big thing.”

Funnell and Lanning, the Enterprise CUBE founders, believe it’s business like the ones here today that will reinvigorate Britain.

“It’s the little people who are the future of the country and I believe the people in this room can make a difference,” says Funnell.

The pair are now hoping to run monthly sessions for the micro-entrepreneurs to provide ongoing contact and support with experts. With the Community Development Finance Association saying only this month that there is a £6m gap in access to finance for individuals and startup businesses like the ones at this event, it’s evident today that goodwill and co-operative spirit are trying to fill the gaps.