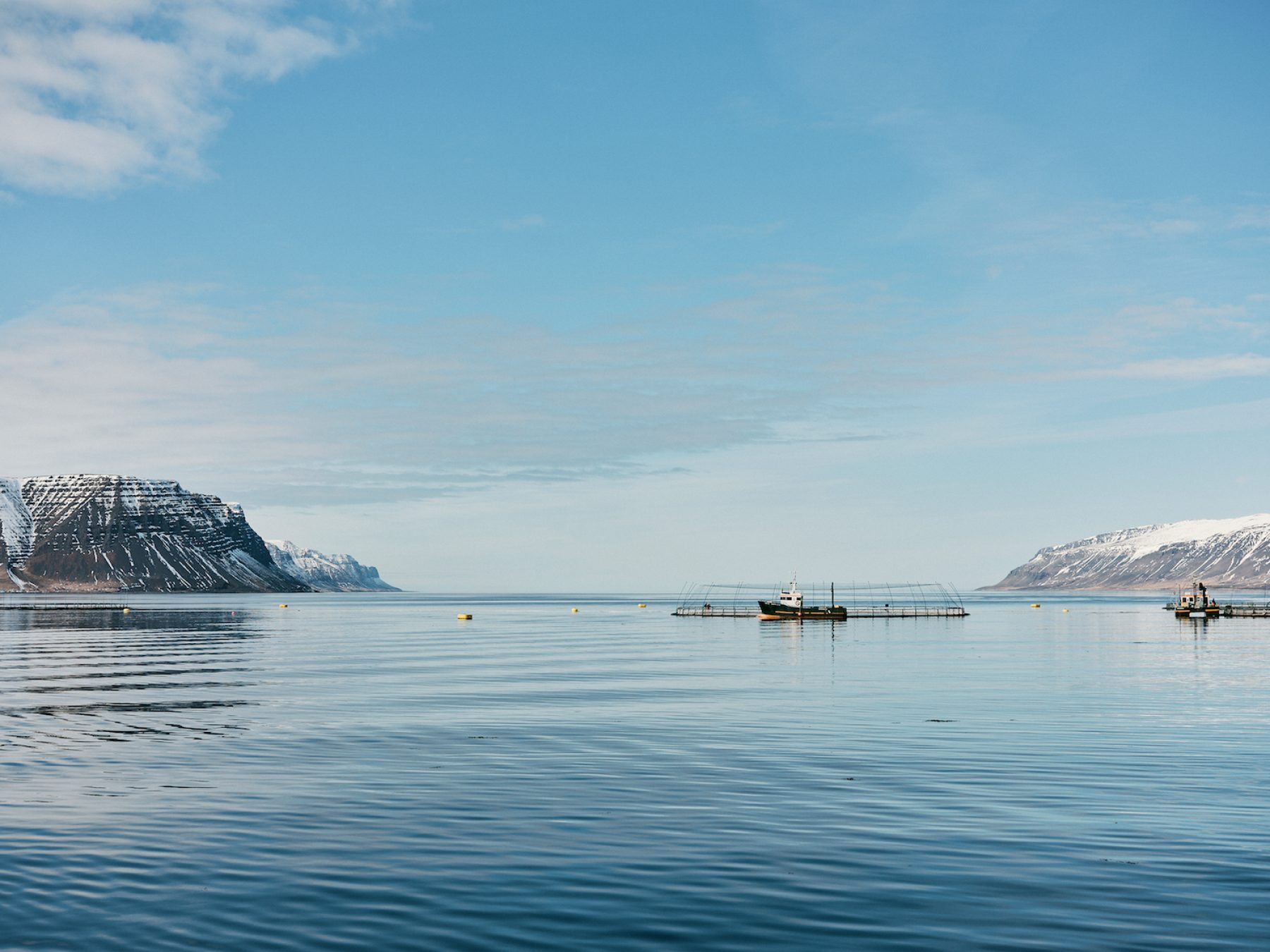 Fighting for the future of wild fish

With Iceland’s wild salmon population under threat, two men are trying to protect them by campaigning against the mighty commercial fish farming industry. Slowly, they're beginning to change public opinion

With Iceland’s wild salmon population under threat, two men are trying to protect them by campaigning against the mighty commercial fish farming industry. Slowly, they're beginning to change public opinion

In 1969, Iceland’s herring simply didn’t turn up. Overfishing by neighbouring Norway and Russia (as well as Iceland itself) meant the country’s largest export was suddenly no more. Gone, vanished.

For Iceland’s fishing communities, it was catastrophic. Along the island’s northern and eastern coasts, salting houses were closed, canning factories were shut and piers were abandoned.

Orri Vigfússon, then in his late 20s, watched his home town of Siglufjörður – the hub of Iceland’s herring industry – descend into economic torpor. It was a brutal lesson in what happens when mankind demands of nature more than nature can possibly give.

So when Atlantic salmon began declining in the 1980s, Vigfússon was quick to act. A lifelong angler and, by that stage, successful businessman, he set up what became the North Atlantic Salmon Fund (NASF) – an environmental non-profit that campaigns for the preservation of wild salmon and the environment that supports them.

Over the coming decades, Vigfússon threw himself into a variety of campaigns, from restoring rivers to removing dams. But he is best known for brokering multimillion-dollar buyouts of salmon quotas in the Faroe Islands, the UK, Greenland, France and Norway, as well as his native Iceland.

The buyouts, which involve commercial fishermen being compensated for giving up their prescribed catch, are credited with preventing Atlantic salmon from being fished to extinction.

Even so, today’s estimated population of 3m is less than a third of what it was 40 years ago. Of these, a mere 50,000 live in Icelandic waters. Now, conservationists fear that the King of Fish, as Atlantic salmon is sometimes called, is in peril once more. The threat? Iceland’s industrial salmon farming industry, which, if a bill currently before parliament is passed, is set to more than quadruple in size.

The industry uses a technique called ‘open net’ production. This involves fish being grown intensively in pens located in lakes or near the ocean shore. Each pen can contain up to 200,000 fish, with most farms comprising a minimum of four or five pens each.

Environmentalists argue that the system, which is widespread in Scotland, Chile, Norway and Canada, results in widespread marine pollution (from fish waste and pesticides, primarily) and involves high mortality rates.

But their main concern is what happens when farmed fish escape, something that “tens of millions” have done since the introduction of open net farming in the 1970s, according to independent scientific research.

“Farmed fish have an instinct to swim and breed, so they end up entering the rivers and competing with the wild salmon population for their breeding grounds,” explains Elvar Friðriksson, a 29-year-old tour guide from Reykjavik and a board member at NASF Iceland.

Wherever in the world commercial salmon fishing has taken place, an “environmental and biological disaster” has followed, he adds. Wild salmon stocks are so depleted in neighbouring Norway that around 100 of its 450 salmon rivers are now closed to anglers. 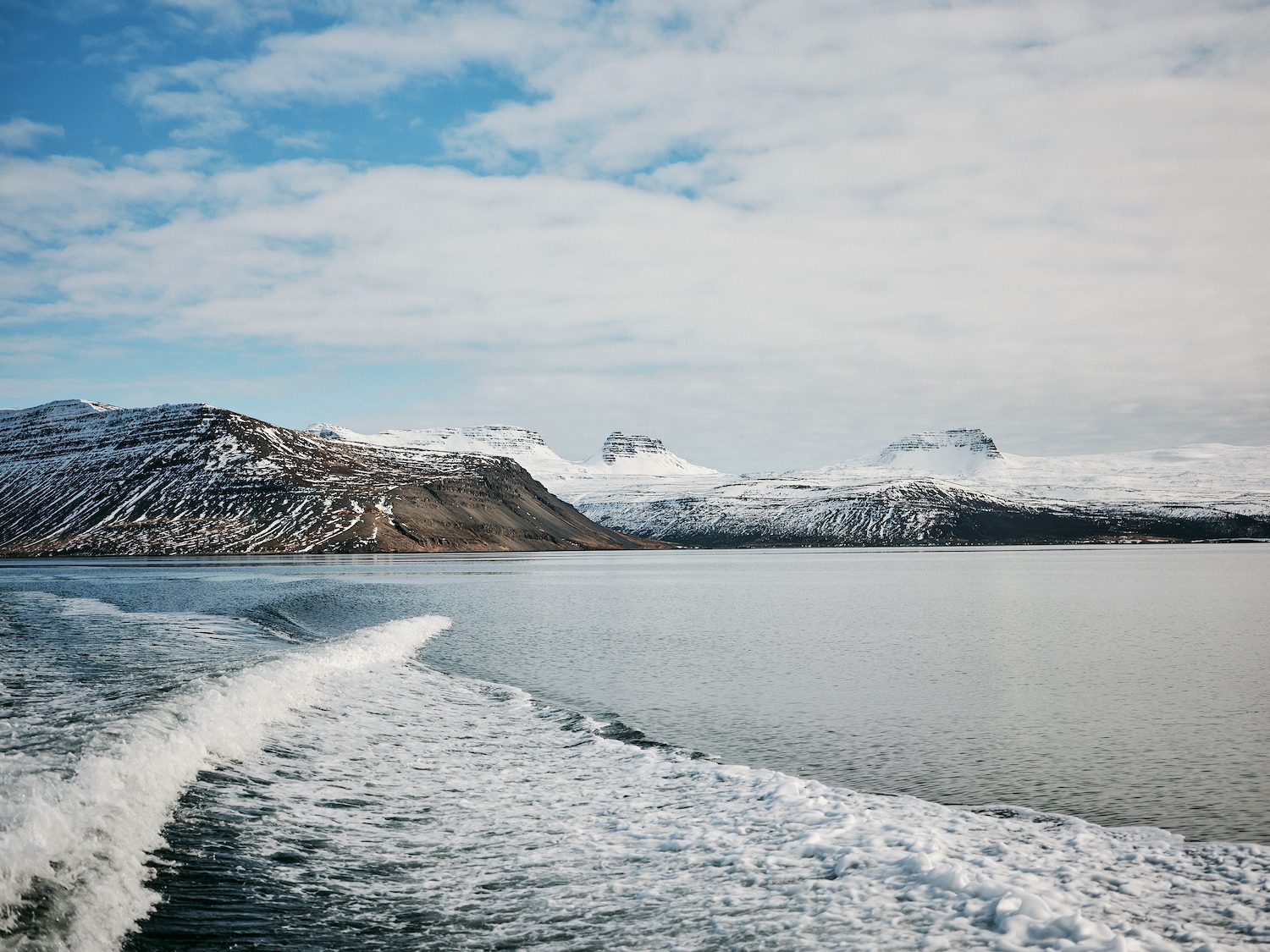 Snow-capped peaks in the Westfjords

Regrettably for Iceland’s wild salmon, Vigfússon is no longer around (he died from lung cancer in 2017, aged 74). Having managed NASF more or less single-handedly for decades, his death left the organisation’s future looking bleak.

But all is not lost. Inspired by Vigfússon’s passionate defence of Iceland’s natural environment, two novice conservation campaigners are seeking to step into his shoes. Friðriksson is one. The other is Friðleifur Guðmundsson, a softly spoken 38-year-old lawyer and NASF Iceland’s current chairman.

Both men recall childhood trips to fish for Atlantic salmon on Iceland’s pristine rivers and want their own children to be able to experience the same. Should the bill pass, it’s “very probable” they never will, the men concur.

To avoid such a bleak scenario, Vigfússon’s successors have been working flat out for the last 18 months to raise awareness. When they are not dashing around Iceland addressing public meetings, they are in Reykjavik, knocking on politicians’ doors.

The pair recently launched a campaign called Against the Current, which calls for the proposed legislation to be scrapped pending further research. An accompanying petition has so far collected more than 10,000 signatures – not bad for a country of only 340,000 people. “Some weeks, I work 50 or 60 hours on this. Let’s just say my employers are very understanding – and my wife even more so,” says Guðmundsson with a wry smile.

Neither is dewy-eyed about the challenges ahead. NASF has 11 national affiliates around the world, but all are small and under-resourced. In Iceland, the pair can count on the help of five part-time volunteers. No one is paid. “The fish farming companies, in contrast, have a huge marketing machine behind them and can pay for lawyers, they can pay for everything. It’s a real-life David and Goliath situation we are facing,” adds Guðmundsson.

To illustrate what they are up against, he cites the recent airing on national television of a documentary that was critical about industrially farmed salmon. The very next day, Fréttablaðið, Iceland’s largest newspaper, ran a paid-for supplement lauding the benefits of intensive commercial salmon farming. “It basically said that open net farming is the greatest economic opportunity ever for Iceland and that there are no associated environmental problems,” recalls Friðriksson.

NASF Iceland’s two indefatigable board members were recently invited to address the committee overseeing the bill’s passage through parliament. They welcomed the chance, but sensed that members’ minds were already set.

The problem, says Friðriksson, is that Icelanders have been persuaded by the fishing industry over many years that intensive salmon farming will bring new jobs. NASF disputes this argument. Open net farming is heavily automated, Friðriksson notes. Furthermore, if wild stocks become depleted, jobs will be lost in Iceland’s lucrative angling industry. 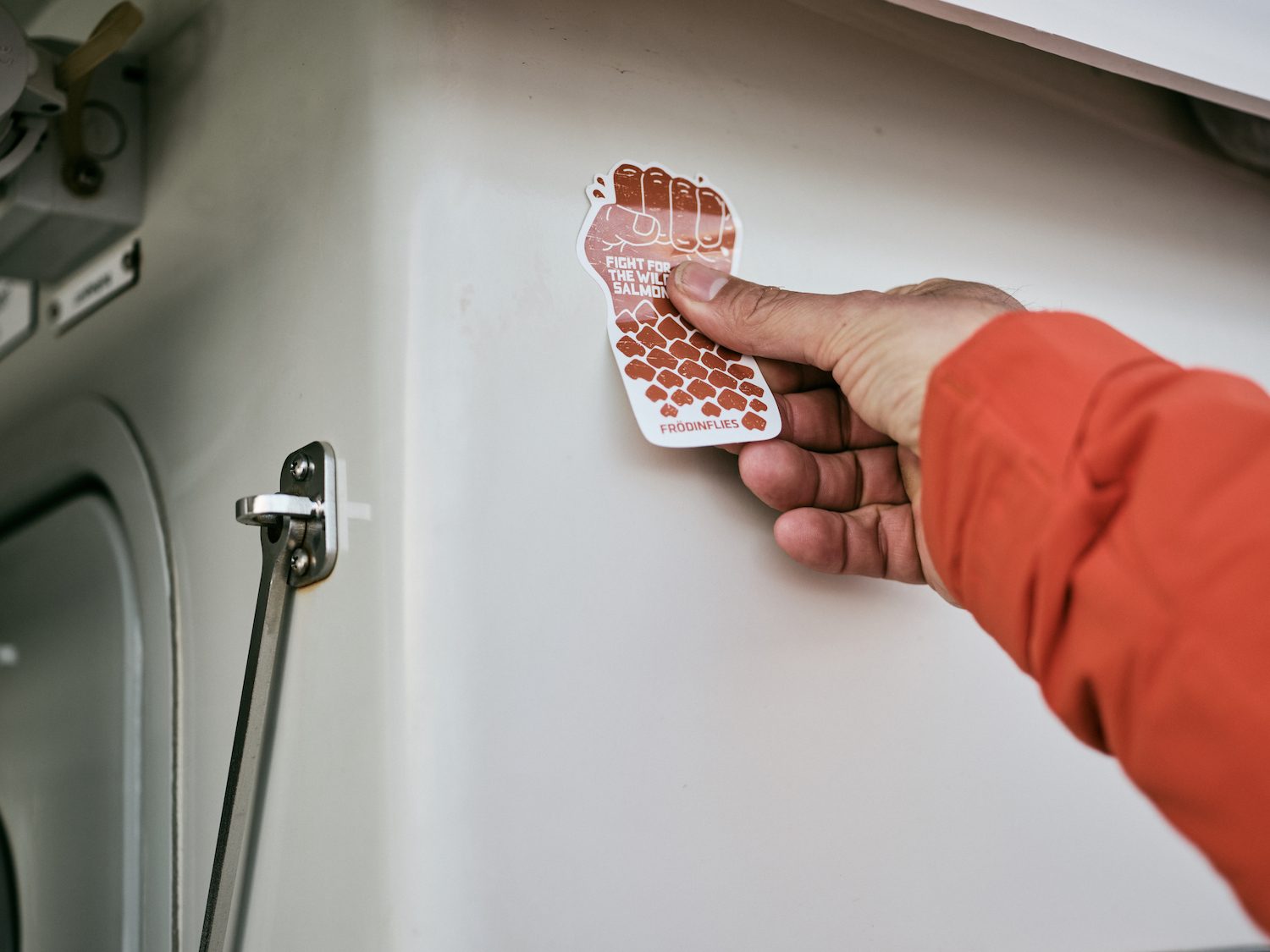 “The memory of the 2008 financial crash is still very fresh here, so it’s political suicide for any politician to appear to go against job creation,” notes Guðmundsson.

Despite the odds, however, Vigfússon’s successors feel that public opinion is slowly shifting. Most Icelanders are now at least aware of the dangers of open net fishing. This, they view as a success in itself.

Nor are they fighting the fight alone. NASF works closely with other environmental charities in Iceland, especially the Icelandic Wildlife Fund, which was established following Vigfússon’s death.

Several companies are also lending their support. Loop, a Swedish fly-fishing equipment brand, has donated a large number of high-end fishing rods for NASF to sell.

Global outdoor clothing company Patagonia, meanwhile, has produced an 80-minute documentary called Artifishal that highlights the problems with open net fishing. The company has also launched a petition called Stop Europe’s Dirty Fish Farms, which is addressed to the governments and members of parliament of Iceland, Norway, Scotland and Ireland. 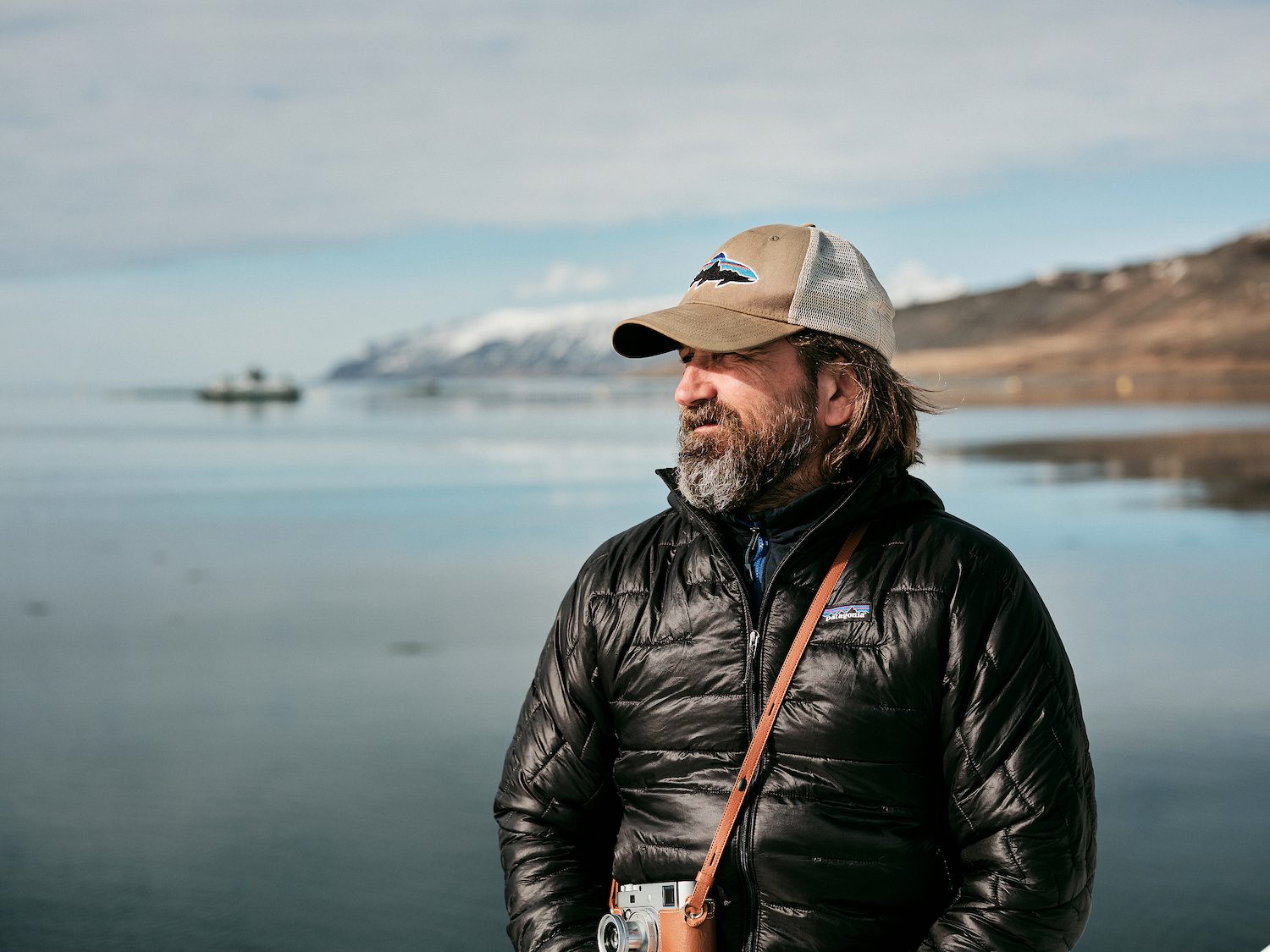 “We urge you to bring a halt to the devastation of wild fish and surrounding ecosystems caused by open net salmon farms. We call on you to impose an immediate ban on new open net farms and commit to phasing out existing ones everywhere,” it reads.

Back to Iceland: if the bill passes, Friðriksson and Guðmundsson say they will continue to fight the industry’s expansion “however we can”. Even if the legislation is cancelled or postponed, Iceland’s wild salmon stock remains in a fragile state, says Guðmundsson: “Our strategy is the same as Orri’s – identify the largest threat and attack the best we can.”

The writer visited Iceland as a guest of Patagonia