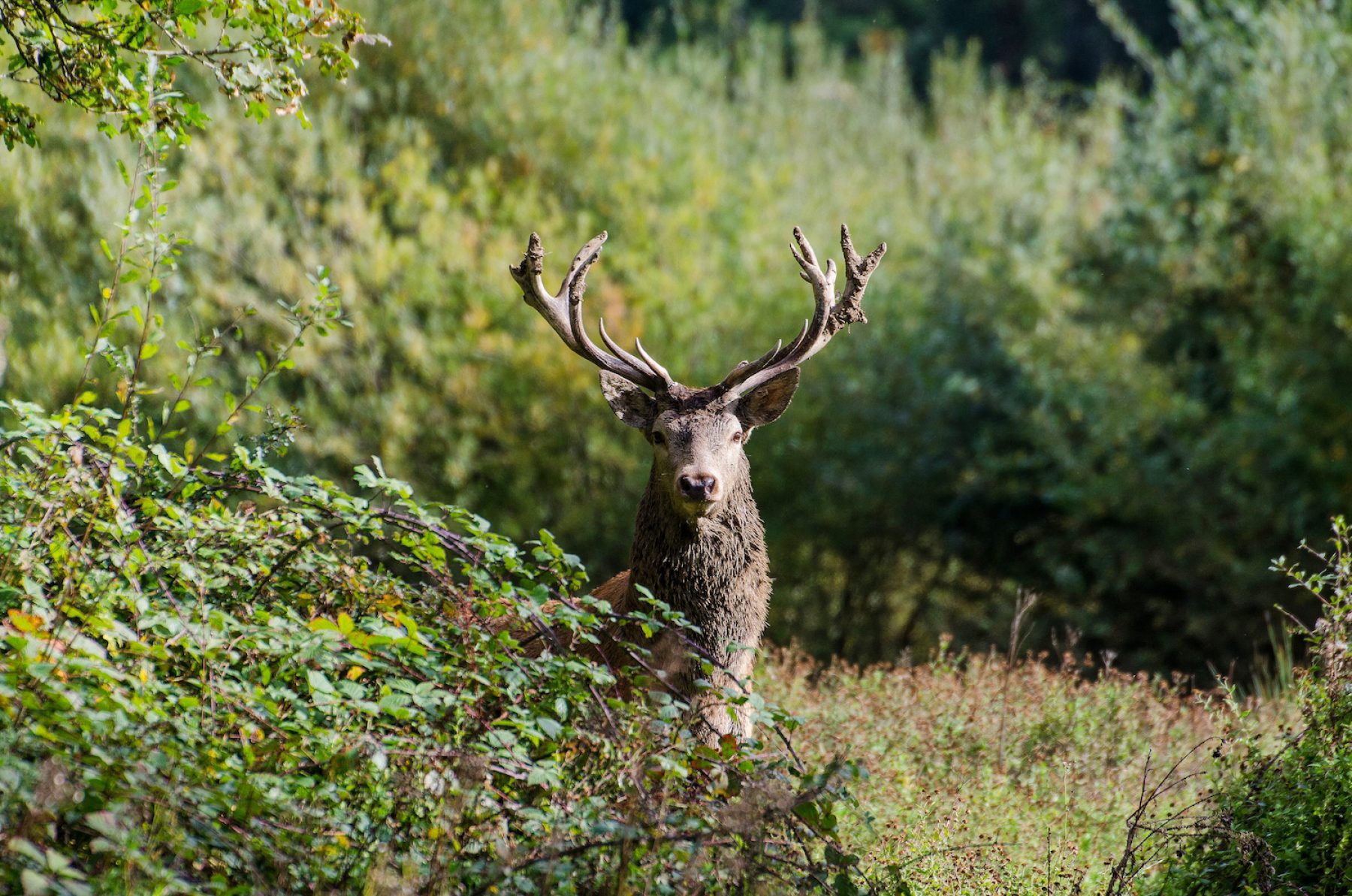 Cycle through the Sussex Weald on a breezy spring day, and you’ll be pedalling through a trim and tidy countryside. Neatly clipped hedges bound close-cropped fields, grazed as often by ponies as cows (this is the home counties, after all). It’s a neat, well-manicured land.

Then, all of a sudden, somewhere south of Horsham a great scruffiness strikes the eye. Hedges seem wildly overgrown, bursting with May blossom, invading meadows shabby with tussocks. There are great clumps of brambly thorn, with slender young oaks emerging shyly from the top as they spring into leaf. It’s gloriously, bewilderingly untidy.

And there’s more, if you venture along a footpath into its midst. There are cows and pigs and ponies here, but not the standard-issue black and white Holsteins and pink porkers you might expect. Instead, Old English Longhorn cattle roam the scrubland, reaching up to pull leaves from a branch – very uncow-ish behaviour to eyes accustomed to heads-down grazing. Russet red Tamworths, looking more like boars than pigs, snuffle and rootle over the grass, churning it into mud. And the ponies are Exmoors, direct ancestors of the wild horses that roamed across Palaeolithic Europe.

There are deer, too: fallow, roe and even the majestic red deer, rarely seen in southern England. And a great profusion of birdsong: cuckoos, fresh from a winter in the African rainforest, echoing through the trees, and nightingales, duelling noisily. Then there are lapwings, skylarks, woodpeckers and yellowhammers, predatory peregrines, red kites and falcons, and even the critically endangered turtle dove. As dusk falls, you might hear the call of any of the country’s five native species of owl.

All this under the Gatwick flightpath, in the very heart of commuter land.

If you’re not focused on a goal, if you’re not concerned about a particular species, but just let nature do its thing, then extraordinary things can happen

It is unrecognisable from two decades back. Then, this was all-too-typical modern English farmland: tightly managed, input-heavy, with precious little space for wildlife – and losing money hand over fist. This is the 3,500-acre Knepp estate, home to the country’s most striking and ambitious experiment in rewilding, and I’m here to meet one of its prime movers, the appropriately named Isabella (‘Issy’) Tree. Her book, Wilding, has captured the public imagination with its tale of Knepp’s extraordinary transformation from agribusiness into wildlife haven.

Tree is engagingly frank that, had the business been successful, she and husband Charlie Burrell (whose ancestors had farmed this land for generations) would never have taken this path. 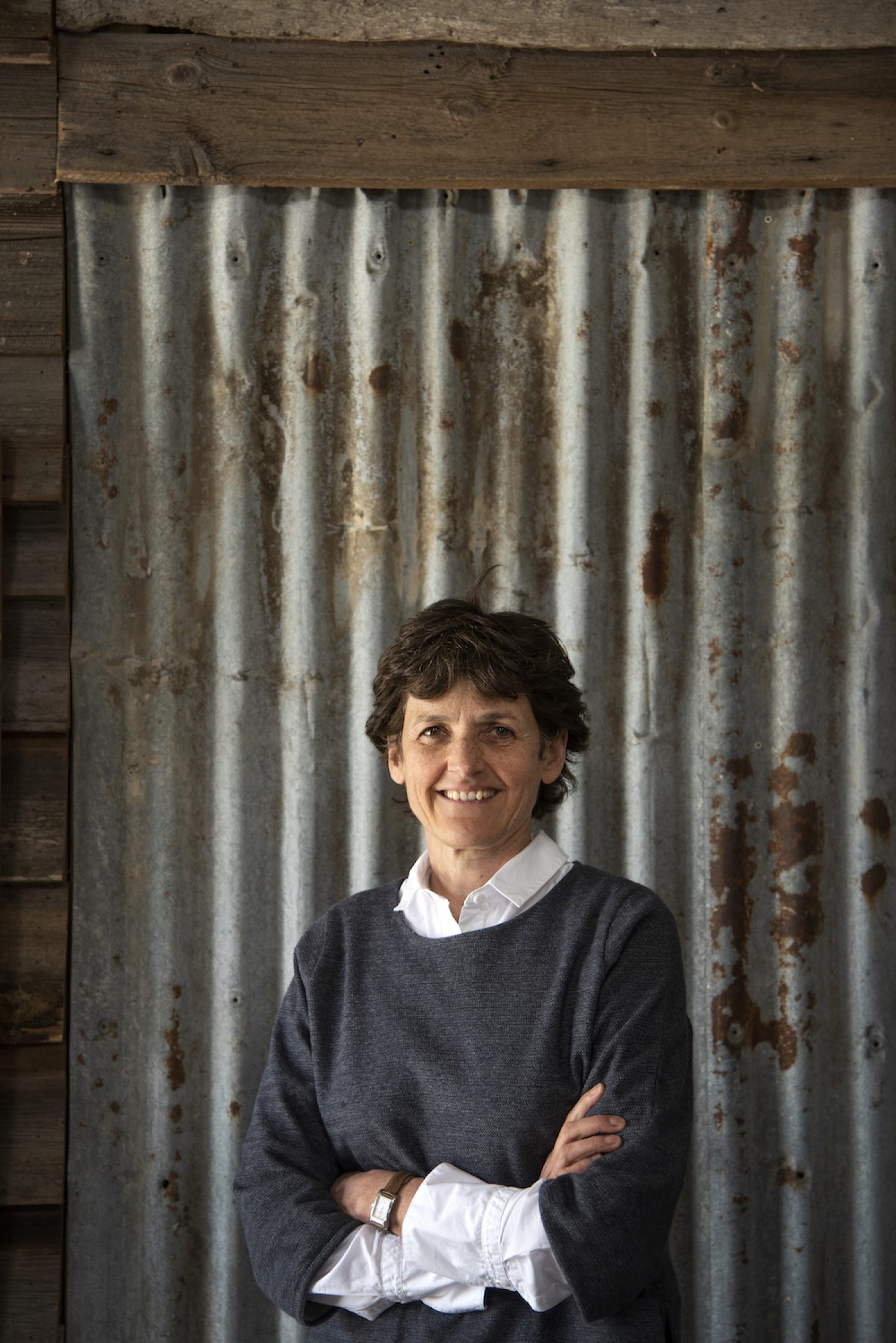 “When you’re just desperately trying to get by, to get through the next week or month or year, you’re just thinking of yields the whole time – you don’t think of the impact you’re having on the soil, or the wildlife.”

But farming on heavy Wealden clay is never easy, and by the end of the 1990s, they were more than a million pounds in debt. It was unsustainable, in every sense of the word. So they sold their animals, their machinery and gave up their milk quota, accepting that they would have to do things differently. Being forced to cut their losses also opened their eyes to some radical new possibilities, and the germ of rewilding took hold.

Eventually, with support from government advisers Natural England and a host of enthusiastic conservationists and ecologists, they took the most radical step any farmer could imagine. They let the land go.

Sure, there were some interventions, like digging out ‘scrapes’ to create areas of standing water. But for the most part it was a case of benign neglect. And the effect was rapid – and dramatic. 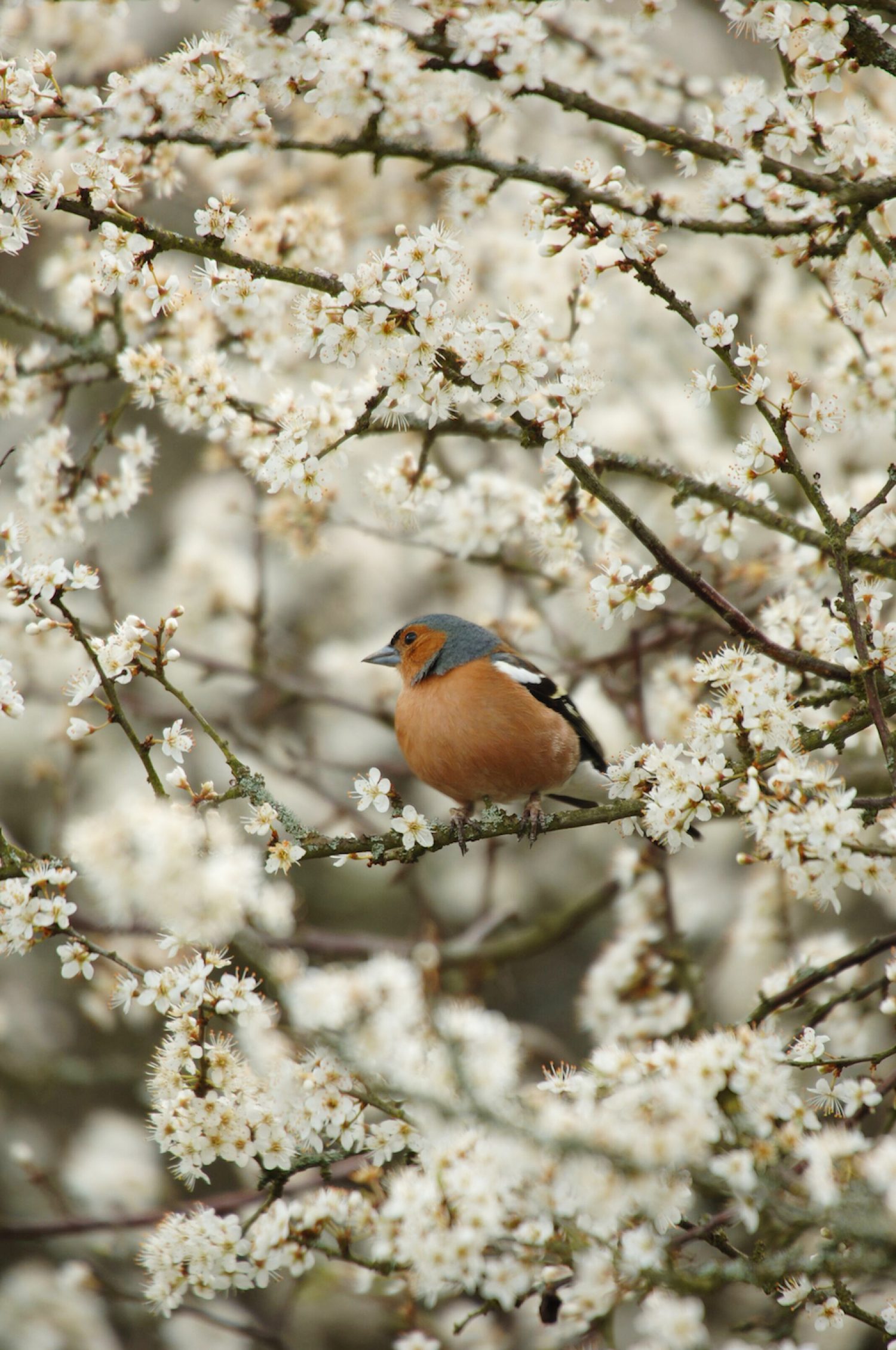 A chaffinch takes in the view from a blackthorn tree. Image: Charlie Burrell / Knepp Wildland

“We knew we were on the right track, because we could see signs of improvement [very early],” says Tree. In the first year came the insects – “it was like surround sound. Then the birds followed,” and in greater numbers and variety than they thought possible.

Not everyone was happy. Some of Knepp’s farming neighbours were outraged at seeing well-managed land run wild, fearing the impact on their own holdings. “They saw fields of ragwort [which can be toxic to livestock], and they went bananas; MPs were getting letters, it could have derailed the whole thing,” recalls Tree.

But Natural England held firm with its support, and gradually the Knepp experiment started attracting interest well beyond its neighbours. People were drawn to its impressively wide range of wildlife. As well as the likes of turtle doves and nightingales, it’s now home to increasingly rare treasures, such as purple emperor butterflies, hedgehogs, and two of the rarest bat species in Europe (Bechstein’s and Barbastelle).

And not as a result of some carefully managed reintroduction scheme: they have all made their own way there. So is it a case of ‘Wild it, and they will come’? “Absolutely. If you’re not focused on a goal, if you’re not concerned about a particular species, but just let nature do its thing, then extraordinary things can happen,” says Tree. 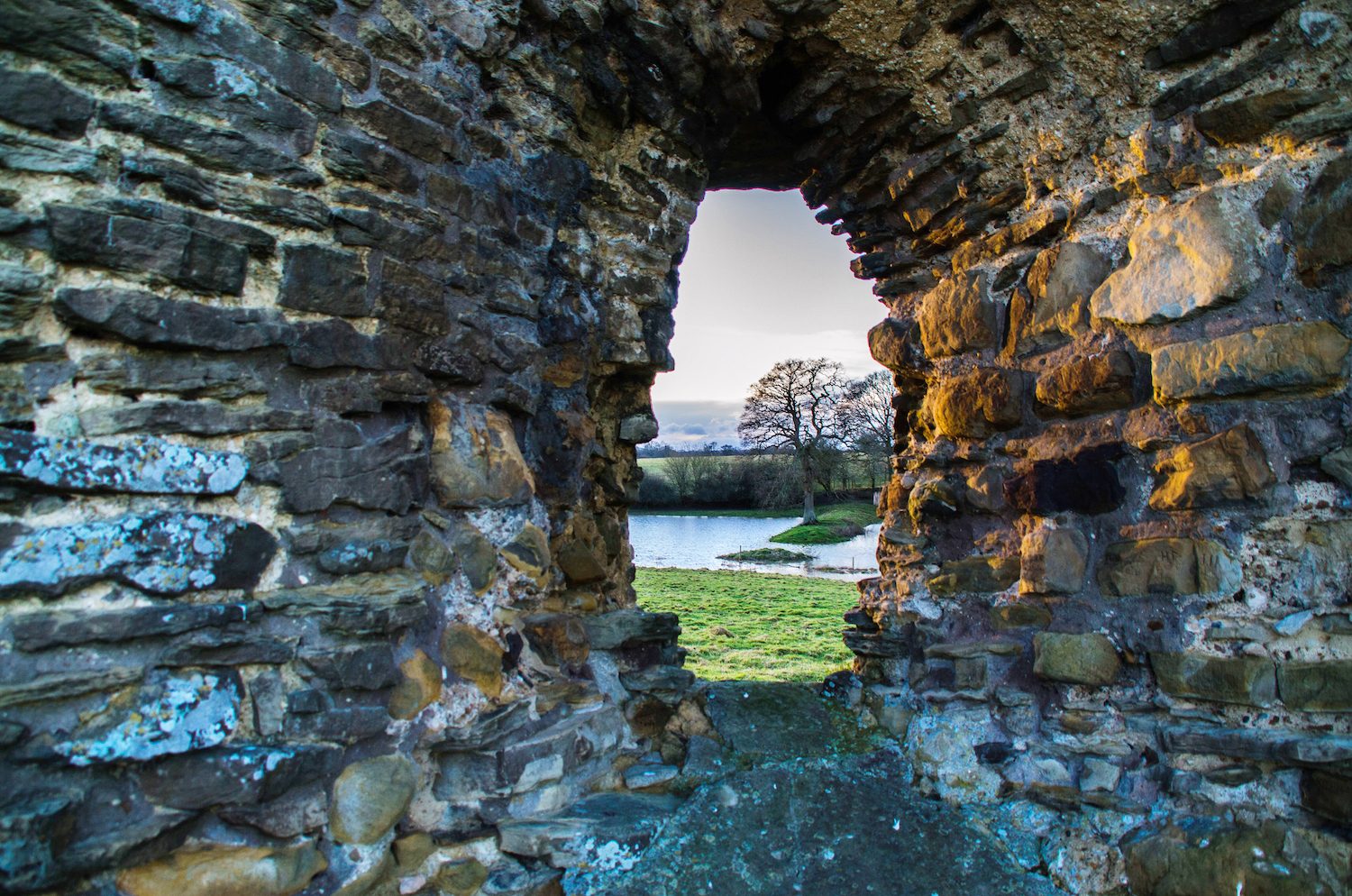 Work has been carried out to reconnect Knepp Lake to local waterways, easing the passage of eels. Image: Charlie Burrell / Knepp Wildland

It isn’t only wildlife that benefits. Letting natural processes take over has wider impacts, too. Overworked soil begins to recover; water becomes cleaner; floods become fewer as the ground soaks up moisture; and the whole landscape becomes a much-needed carbon sink. Left entirely to itself, it would eventually turn to forest. But that won’t happen at Knepp because of the one major intervention they have made.

Namely, introducing the animals – the Longhorns, Tamworths and the Exmoor ponies. As Tree explains, these mimic the action of ancient wild herbivores such as aurochs, bison and boar, which would once have roamed across much of Europe. Thanks to such creatures nibbling away, the landscape of the continent’s past would almost certainly not have been the unbroken wildwood of popular imagination, but a richly shifting mosaic of trees, scrub and grasses, with patches of marsh and lakes where water naturally gathers.

Another nature cliché Knepp is turning on its head is the idea that most species are restricted to very specific niches. Here, that’s clearly not the case. “Take nightingales – we’ve already got about 14 singing males, and it’s still early in the season, so it will be a bumper year,” says Tree. “Now, all the books classify them as a bird that’s found in coppice woodland, so in theory, that’s what we’d need to attract them. But we’ve got nightingales here, and they actually seem to prefer the thorny scrub. So it’s pretty clear that what they need is cover, and because they didn’t have thorny scrub in the rest of the landscape, they were ending up in coppice, because it has that dense, low understorey.”

Nightingales weren’t the only ones to disobey the field guides. “Every month there’s something new appearing. We’ve got nightjars. People say, ‘Oh no, you must have made a mistake, they’re a heathland bird’. But they’re here. And maybe they were only listed as a heathland bird because that was the only place left for them.”

It makes one reconsider many similar classifications, she adds. “Like ‘farmland birds’. Where were they before there were farms, eh?” 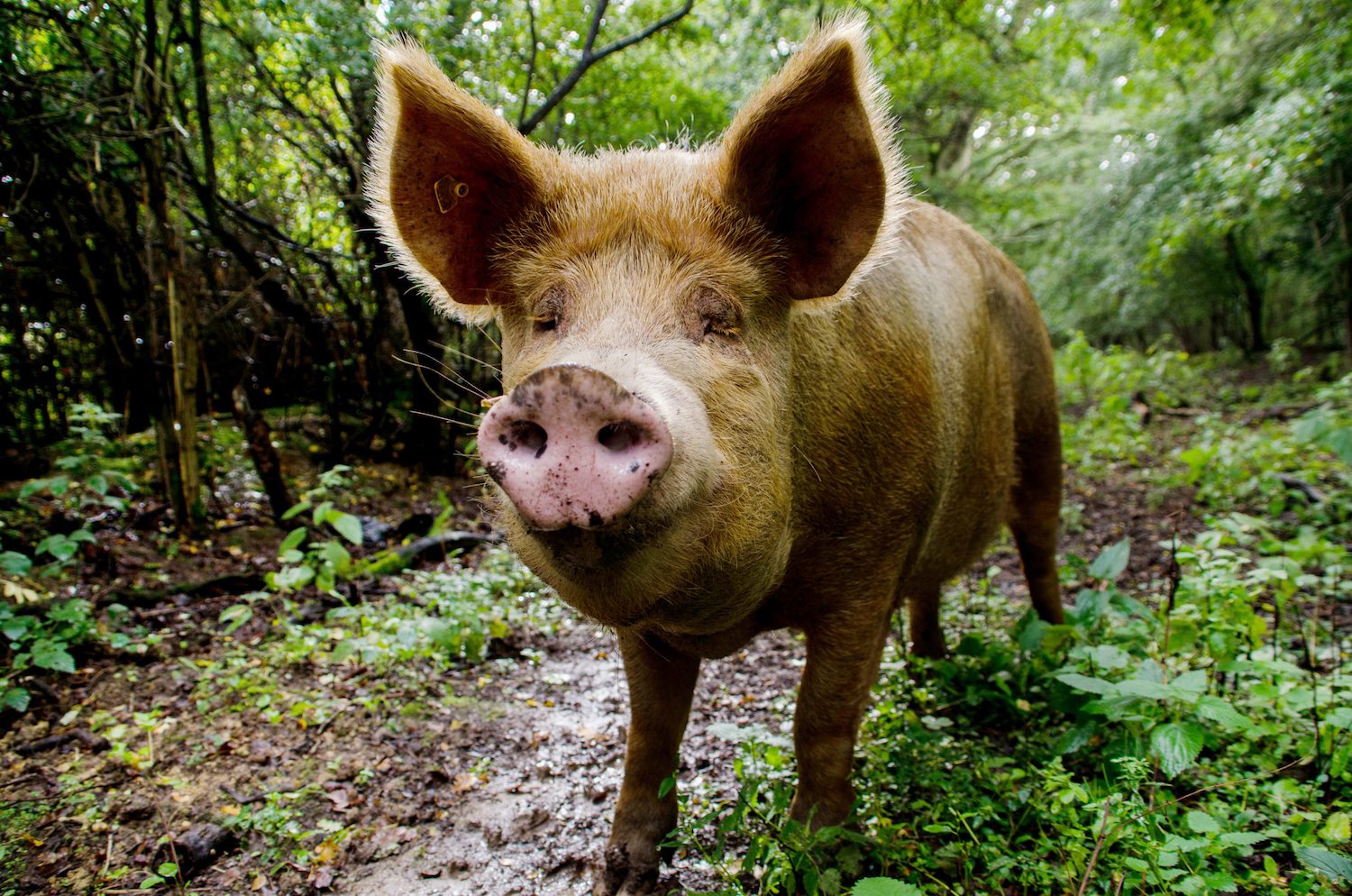 But to what extent is Knepp a model for a future countryside? Rewilding doesn’t in itself a business model make – not yet, anyway. Knepp receives some agri-environmental payments from public funds, and also earns income from its ‘safari’ tourism, combined with a small eco-camping business. Then there are the standard hectare-based support payments made under the EU Common Agricultural Policy. But the estate is also dependent on rental income from cottages, along with redundant farm buildings which it’s turning into offices.

Not all farmers enjoy such monetisable assets, of course. And sceptics would argue that rewilding a chunk of Sussex is all very well, but we still have to produce food – beyond the delicious cuts of ‘wild range’ meat from its culled cows and pigs, which is all that Knepp does now.

“Yes”, responds Tree, “but that doesn’t mean using every inch of land for production. We already produce more than enough to feed the world, and then we waste 40 per cent of it.”

There is an urgent need for a farming economy that produces other vital ‘ecosystem services’, she argues, such as restoring soils, curbing floods and soaking up carbon – all of which Knepp does. 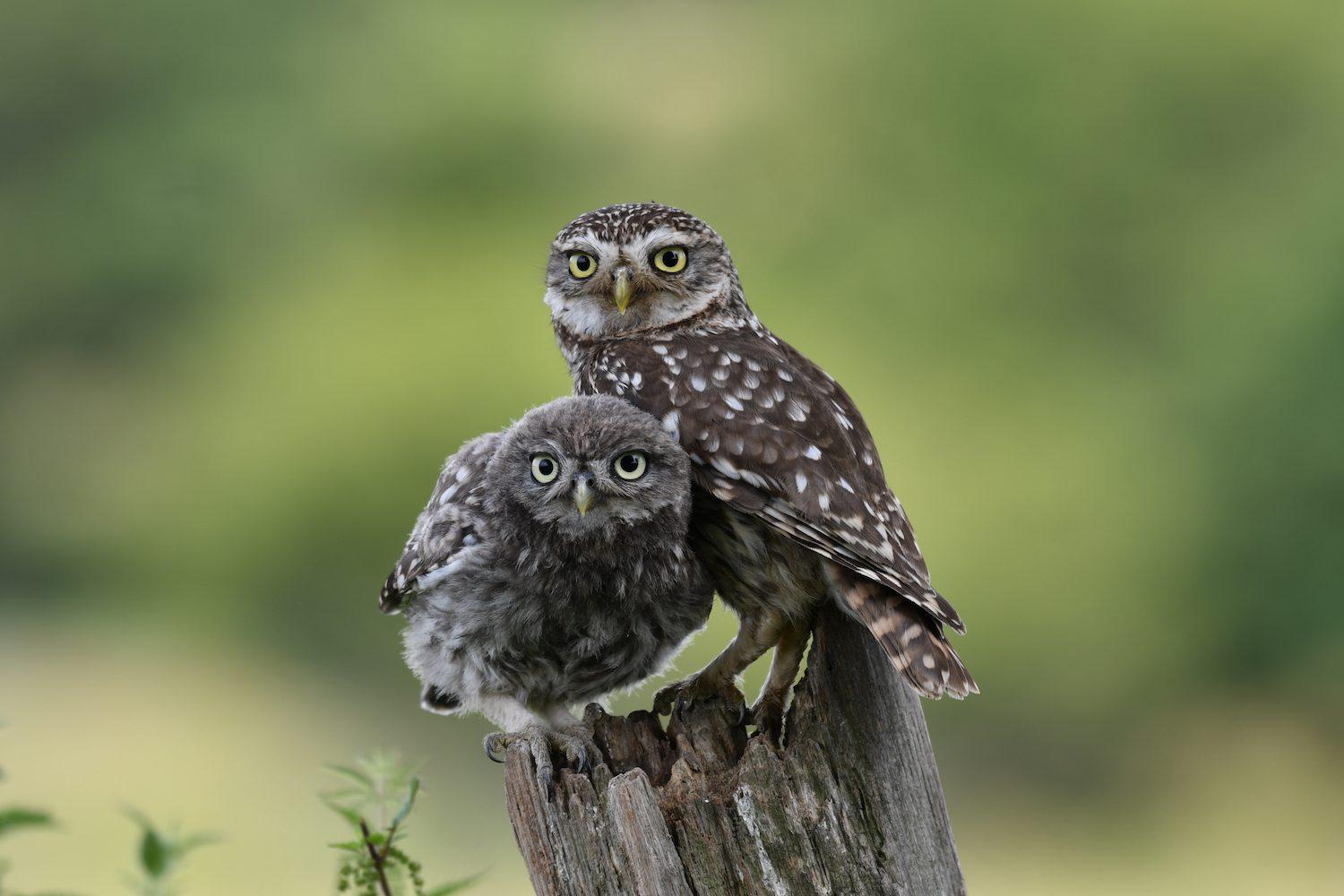 Little owls are proliferating at Knepp, thanks to organic soils rich in earthworms and other invertebrates. Image: Ned Burrell

“We could even have a system of ‘pop-up Knepps’, where land would be left to its own devices for as much as several decades,” says Tree. “So it would provide [all those services], and then at the end of the period you could use all those huge forestry machines to go straight through it all and turn it back into a workable tilth.

“The soil will be naturally fertile, you won’t have the pest burden and crop diseases to contend with, and around you will be other areas coming up for their turn ‘in the wild’, so your nightingales and turtle doves will shift into those, and you’ll have wild corridors linking them up.”

That may sound far-fetched, but it’s a lot more logical than working the land to exhaustion and paying farmers subsidies to do so. And that’s a logic that is gaining ground in Whitehall, too. The UK government has already declared its intention, post-Brexit, to shift the subsidy system to support farmers who provide ‘ecosystem services’. Recent visitors to Knepp have included teams from the Treasury and the prime minister’s office.

No one is holding their breath, of course, but it might just be that this swathe of gloriously messy, nightingale-haunted Sussex scrub could be a crucible for a very different sort of English countryside.